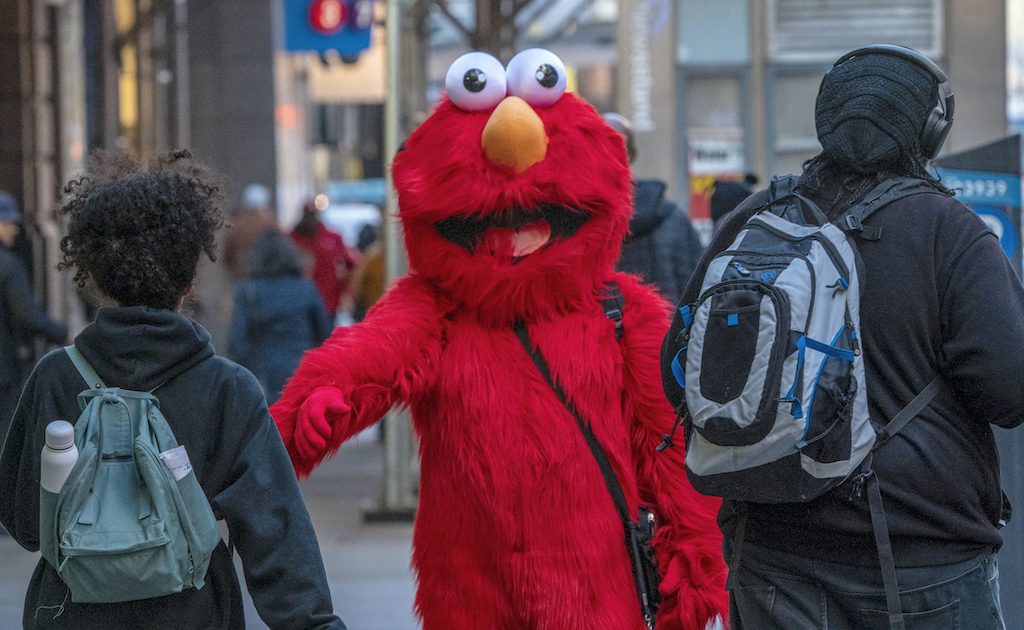 The 32-year-old Peruvian is one of dozens of men and women, mostly from Latin America, trying to eke out a living as costumed characters inside New York's beating heart.

Dressed as Sesame Street fuzzballs Elmo and Cookie Monster and superheroes like Batman and Hulk, they pose for photos with tourists in exchange for tips, vying with topless women in body paint and a semi-naked guitar-playing cowboy.

For many visitors, the mascots are part of the frenetic entertainment district's charm but to some New Yorkers they symbolize a crowded neon nightmare that is best avoided.

With its bright lights and giant branded stores, the famous intersection is a symbol of the city that never sleeps and its untold opportunities. Where dreams are made of, as the Alicia Keys and Jay-Z song goes.

But for Bega the reality is more of a nightmare. She says she sometimes makes just $20 a day.

"You come here to waste your time, to freeze to death, and sometimes you don't even earn enough to eat," Bega tells AFP in Spanish, her blue costume complete with ginger pigtails.

Bega got into the work through a friend and has colleagues from Mexico, Colombia, the Dominican Republic, Guatemala and Ecuador.

Many bring their costumes from their home countries, where they can be purchased fairly cheaply, or buy them online in the United States where they commonly cost upwards of $200.

They require no permit to operate.

"Some are a little pushy but most of them are nice. They're out here making a living like everybody else," says 62-year-old Kentucky resident Dave Duke, who took a photo of his wife with a costumed Statue of Liberty.

In September, a man in an Elmo costume was arrested after being accused of groping the buttocks of a 14-year-old girl.

"Because of this the police came to bother us. They're hardly letting us work," says Bega, who does a second job in the evenings in order to care for her kids aged two and ten.

Jose from Mexico, a different "Elmo" to the one arrested, says one or two of the hucksters are spoiling it for everyone else.

"Children used to run to me but now they see headlines about Elmo being a child molester and they don't," he explains, declining to give his surname.

Nearby, Robert Burck is having a better time of it, belting out tunes on his guitar while wearing only underpants, a cowboy hat and cowboy boots.

The 48-year-old known as the "Naked Cowboy" has been a regular fixture in Times Square for 20 years and says he makes around $150,000 a year in tips.

"I absolutely love the fact that I'm working in a den of thieves," he jokes to AFP, as CD sellers and ticket touts hustle with tourists.

Renamed Times Square from Longacre Square in 1904 after The New York Times newspaper moved its headquarters there, the area has had its problems over the years.

For chunks of the 20th century it was a hotbed of vice where illegal drugs and prostitution flourished and entertainment centered on pornographic theatres and sex shows.

The area, heavily policed like much of New York due to fears it could be a target of terror attacks, is much less seedy today.

Up to 450,000 people are estimated to cross Times Square every day but some New Yorkers try to find a way around it if they can.

Under discussions such as "Why do New Yorkers dislike Times Square?" on Quora, locals cite crowds, overpriced restaurants, stores selling tourist tat, and the costumed characters.

The Times Square Alliance, a non-profit that supports local businesses, wants to improve the famous intersection further by reining in the mascots.

It dislikes their pack-like modus operandi where one puts an arm around an unwitting tourist before others rush over to be in the photo and demand money.

"Times Square is always a little bit crazy. It's all about capitalism," Alliance president Tim Tompkins tells AFP at the Square's northern tip between Broadway and Seventh Avenue.

"But what we're objecting to here is that sometimes it's not voluntary," he adds.

Since 2016 the characters' commercial activities have been restricted to specific zones but some roam outside the marked areas.

The Alliance believes better regulation of the costumed characters by city authorities would make Times Square even more family friendly.

"We're trying to make the experience the best for people who have the opportunity to visit here," says Tompkins.

Times Square is nicknamed "The Crossroads of the World." There, Bega finds that she is at a crossroads of her own.

"The work is not sustainable. I don't know if I can continue like this," she says, before running off to join her friend dressed as Winnie the Pooh.