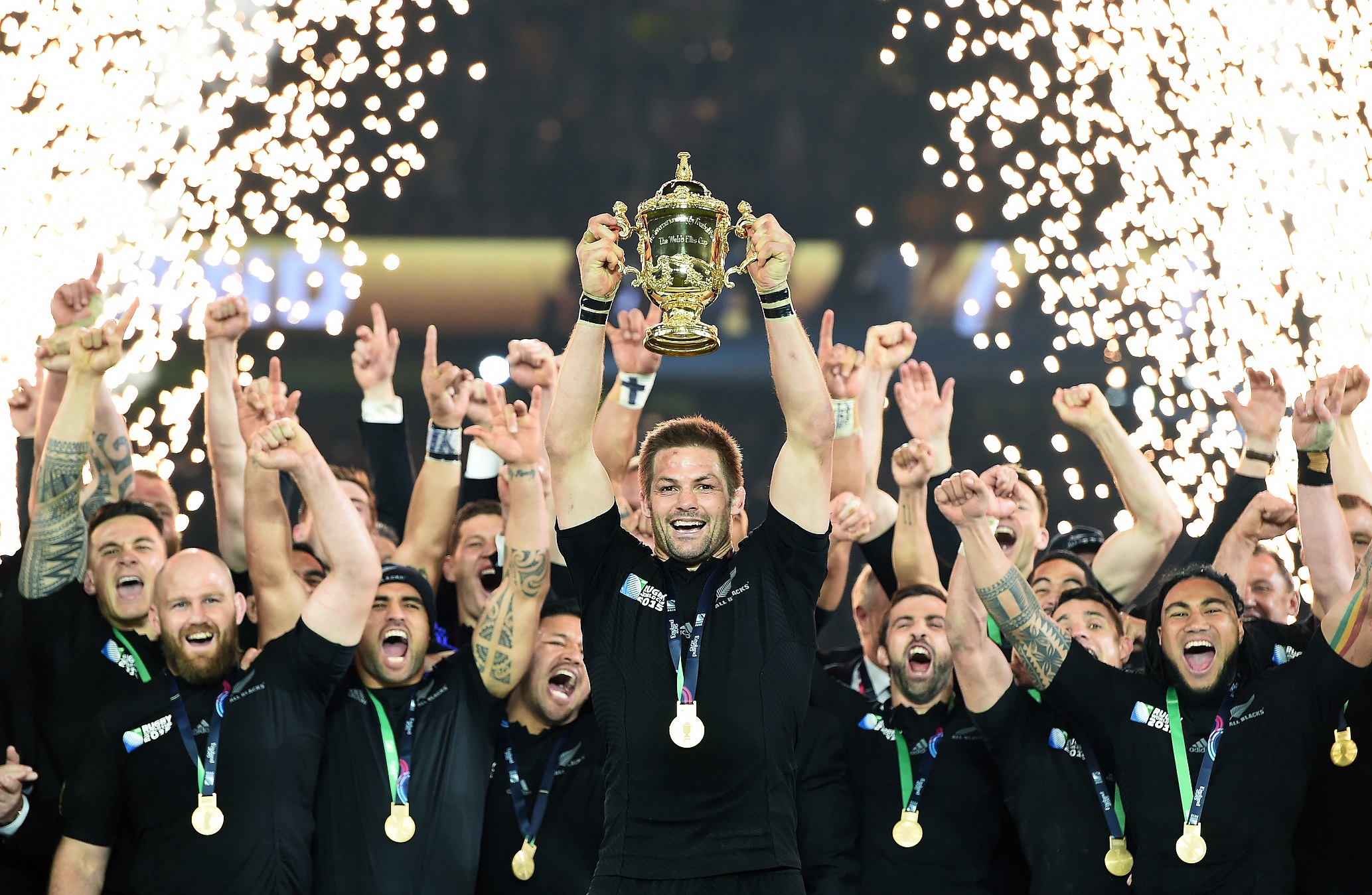 File: New Zealand captain Richie McCaw lifts the Webb Ellis trophy after the All Blacks beat Australia in the Rugby World Cup final at Twickenham in London on 31 October 2015.

WELLINGTON, New Zealand - As New Zealanders unite behind the All Blacks' Rugby World Cup defence in Japan, activists recall when the team's links to apartheid-era South Africa split the nation in violent protest.

Modern-day fans may find it difficult to imagine an era when the All Blacks - who are chasing an unprecedented third straight title at this year's tournament - were not universally lauded.

But for decades they divided Kiwis over New Zealand rugby's insistence on maintaining sporting ties with South Africa's apartheid regime.

The flashpoint came when the Springboks toured in 1981, sparking bloody scenes that rocked the normally peaceful nation as protestors and police fought pitched street battles.

"It brought New Zealand the closest it's been to civil war in the 20th Century," the former chairman of campaign group Halt All Racist Tours (HART), Trevor Richards, told AFP.

"Foreign correspondents who covered the tour said that for the final match at Eden Park, Auckland looked more like a war zone or something they'd see in Northern Ireland at the height of The Troubles.

"There were cars upturned, the police were roaming the streets with long batons chasing demonstrators and a plane was flying overhead dropping flour-bombs on the pitch."

HART was established in 1969 and the 50th anniversary will be marked this month at events held by Wellington's Victoria University and the University of Auckland.

By the late 1960s the issue of sporting ties with South Africa had been simmering for years.

There was outrage at the start of the decade when New Zealand rugby chiefs bowed to pressure from the apartheid regime not to send Maori players on an All Blacks tour.

Maoris were allowed to make the trip in 1970 and 1976, but only after officials in Durban deemed them "honorary whites" for the purposes of the tour.

Fly-half Bob Burgess was one of the few players to publicly take a stand on the issue, declining a trial with the All Blacks ahead of the 1970 tour.

He went on to play seven Tests for the New Zealanders, none against South Africa.

By 1981 his playing career was over, but Burgess' commitment to HART had intensified.

Burgess said he never accepted the central argument of tour supporters that sport and politics should not mix.

"There was sport, there was morality and there was politics - that's life, these things go together," he told AFP.

"Was it a hard decision? Probably not, because I felt there were more important things than a game of rugby."

Early in the 1981 tour, a Springboks match against Waikato in Hamilton was cancelled after demonstrators invaded the pitch.

Police responded with increasingly brutal tactics, staging baton charges on crowds outside parliament in Wellington in what became known as "The Battle of Molesworth Street".

Protestors in turn became more radical, arming themselves with clubs and bats, while donning motorcycle helmets and makeshift body armour for protection.

For the final Test in Auckland, more than 2,100 police - about 40 percent of the entire national force - faced off against 7,000 protestors outside an Eden Park stadium ringed with razor wire.

Protestors buzzed the ground with a single-engine Cessna dropping flour-bombs, felling All Blacks prop Gary Knight with a direct hit to the head but failing to stop the match.

The divisions caused by New Zealand rugby's stance took years to heal and damaged the game's standing among Kiwis.

When New Zealand hosted the inaugural Rugby World Cup in 1987, the-then prime minister David Lange was still so disillusioned with the sport that he refused to attend.

Richards said that while the protests did not halt the 1981 tour, they played an important role in highlighting the global opposition to apartheid.

He said the anti-apartheid movement also created a generation of activists, acting as a springboard for change in areas such as gay rights, abortion reform, recognition of Maori and nuclear disarmament.

"The passion that had been built up in the preceding decade found an escape valve in 1981," he said. "It proved to be a real engine room for social change that helped shape New Zealand."

Burgess remained estranged from rugby until 1994, when he watched a Springbok team that was touring New Zealand with the blessing of South Africa's newly elected president, Nelson Mandela.

"I was on the right side of politics," he told AFP, revealing his relationship with rugby was now sufficiently repaired for him to follow how his old team were faring in Japan.

"I've watched a little," he said with a twinkle in his eye. "Just enough to know the All Blacks will win."