A wary Kenya gears up for tense election 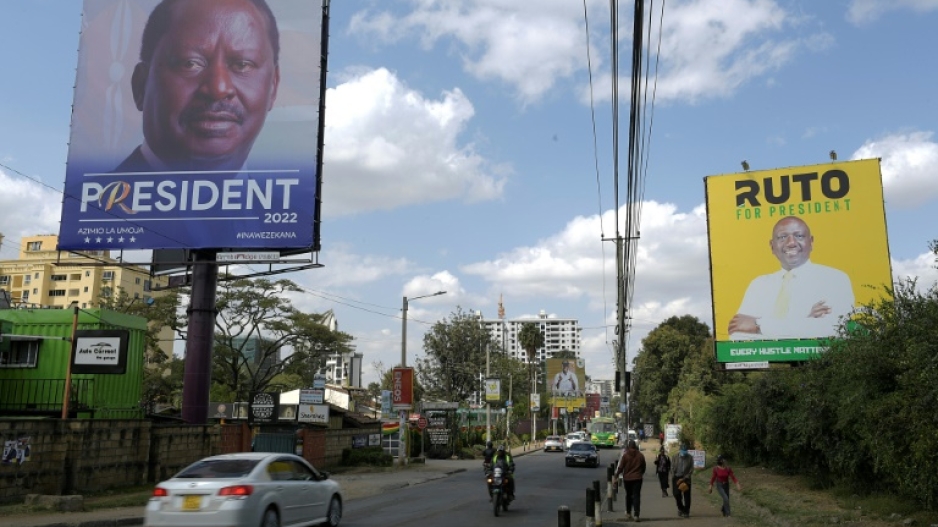 NAIROBI - Millions of Kenyans head to the polls next Tuesday, with two political veterans locked in a fierce battle for the presidency.

Memories of violence during previous elections loom large, and the country is grappling with a cost-of-living crisis, widening inequality and a crippling drought.

Four candidates are vying for the top job, with a tight race between frontrunners Deputy President William Ruto and Raila Odinga, the opposition leader now backed by the ruling party.

Campaigning has been dominated by mud-slinging, fake news and the practice of showering prospective voters with freebies including umbrellas, groceries and cash.

There is speculation Kenya may have its first presidential run-off, and concerns are mounting that if losing candidates challenge the results, the discord could erupt into street violence.

"It's very hard to say who will win the election because it's a toss-up on whoever can... be more emotionally attractive" to voters, said Macharia Munene, professor of history at Nairobi's United States International University. 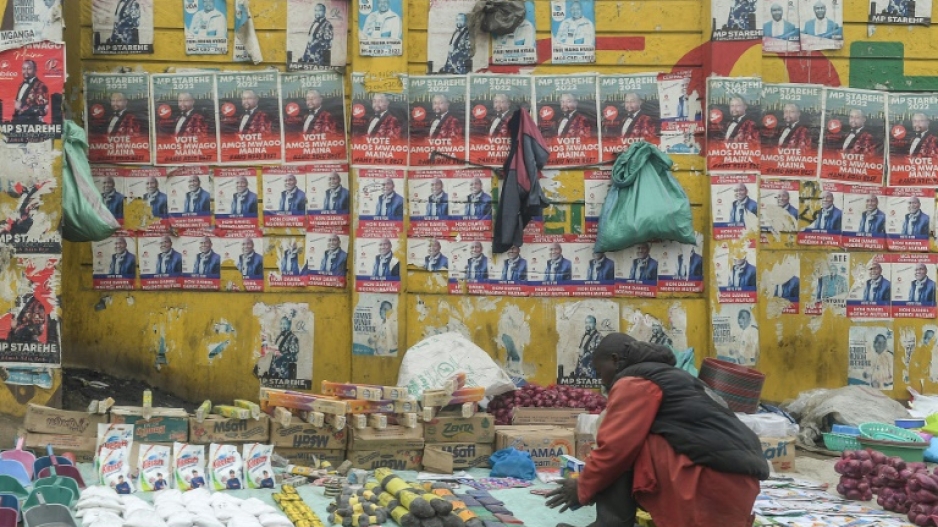 In addition to picking a new president, Kenyans will also vote for senators, governors, MPs, woman representatives and some 1,500 county officials in a total of six elections

The leading contenders are familiar faces: Odinga served as prime minister from 2008 to 2013 and Ruto, 55, became deputy president in 2013.

But Ruto -- long cast as President Uhuru Kenyatta's successor -- saw his ambitions thwarted when his boss shook hands with longtime rival Odinga in 2018.

Kenyatta, who has served two terms and cannot run again, has thrown his weight behind Odinga for August 9, giving him access to the ruling Jubilee party's powerful election machinery.

The handshake however dealt a blow to Odinga's anti-establishment credentials, prompting suggestions he had effectively bartered away his autonomy in exchange for Kenyatta's support.

Joining the presidential contest are lawyers David Mwaure and George Wajackoyah -- the latter an eccentric former spy who wants to legalise marijuana.

The political gamesmanship has fuelled frustration, especially among young Kenyans.

Around 22 million people have registered to vote, but the number of young voters has dropped compared to the 2017 poll. 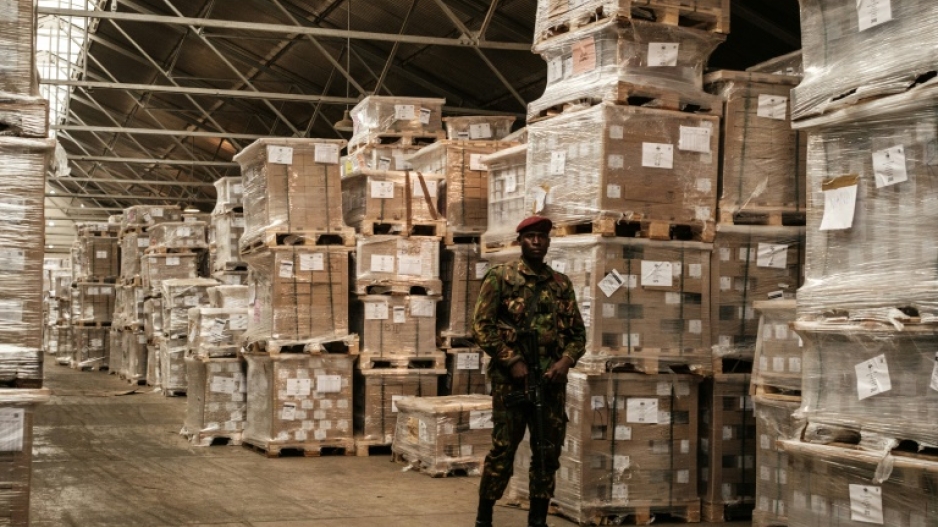 A soldier guards boxes of ballot papers for Kenya's elections

"So (voters) think it doesn't really matter, the next president, the next senator, the next governor will just do what the other guy did last time," he told AFP.

Odinga has vowed to tackle endemic corruption, pointing out that Ruto's running mate is fighting a graft case.

Meanwhile Ruto -- with a rags-to-riches background and a shadowy reputation -- has taken aim at the "dynasties" running Kenya -- a reference to the Kenyatta and Odinga families, who gave the country its first president and vice-president.

Ruto has styled himself as "hustler-in-chief" and champion of the downtrodden in a nation where three in 10 people live on less than $1.90 a day, according to the World Bank.

Kenyans, already hit by the Covid pandemic, are struggling to afford basic staples as the war in Ukraine pushes up prices. 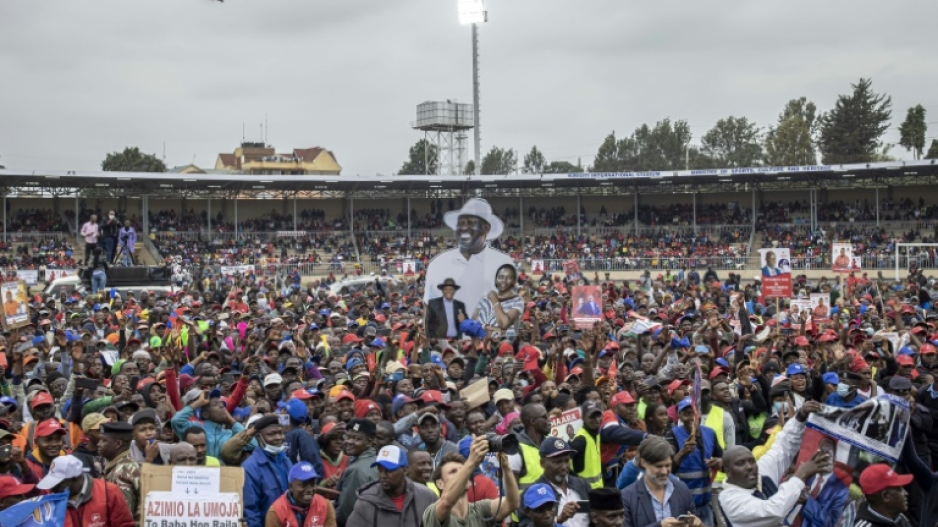 "Customers who used to buy many items... have now cut down," said Peter Kibacia, a fruit and vegetable seller in Nairobi.

"There's no saving at the moment."

Economic pressures could even compete with tribal allegiances as the key factor driving voter behaviour, according to some observers.

With neither Ruto nor Odinga belonging to the dominant Kikuyu tribe, which has produced three of the country's four presidents, the election will open a new chapter in Kenya's history.

If Odinga wins, his running mate Martha Karua would become deputy president, the first woman to hold the post.

Fears persist about the risk of violence -- a reflection of the dark shadow cast by the 2007 polls, which were followed by a horrific bout of politically motivated ethnic clashes that killed more than 1,100 people.

Odinga's challenge to the 2017 election result was met with a heavy-handed police response which left dozens dead.

Both polls were believed to be beset with problems, with the Supreme Court ordering a re-run of the 2017 vote, citing widespread irregularities in the counting process and mismanagement by the electoral commission.

Concessions are a rarity in Kenya -- no presidential election result has gone unchallenged since 2002.

The National Cohesion and Integration Commission, a peace-building body set up after the 2007-2008 clashes, said there was a 53-percent chance of violence during the election period. 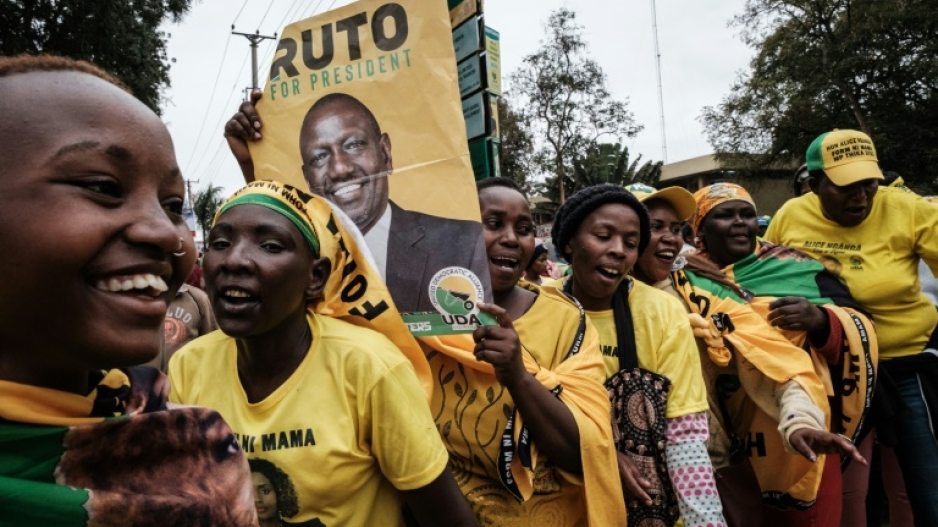 Schools have already shut their doors while some supermarkets have urged customers to stock up in advance.

Diplomatic sources were cautiously optimistic but with pressure high on the election commission to ensure a free and fair poll, voters remain wary.

"But we will pray for a peaceful election."