According to the Zimbabwe Statistics Agency, the overall inflation rate year-on-year in March is at 240-percent.

Biti said corruption is behind the fall of Zimbabwe’s economy.

In the past year, Zimbabwe witnessed some Ministers and government officials being arrested and fired but critics like Biti says that is not enough to mend the economy.

Biti said, "there is a meltdown in the country, if you want to see the health of the country look at the exchange rate. In Mozambique, during the war years, we knew things were bad because the Metical had collapsed, in Zambia under Kenneth Kaunda we knew things were bad because the Kwacha had fallen, and under Robert Mugabe, in 2008 and 2009 because the Zimbabwean Dollar had collapsed we were trillionaires who were poor. In current Zimbabwe, inflation has shot up, the country currency between January and now has fallen by 80 percent."

According to the Zimbabwe Statistics Agency, the total Consumption Poverty Line, or the money needed by one person to feed themselves, stands at over 50 US dollars per month.

Biti said, "look at the poverty levels, look at the collapse of social services, there are no drugs in hospitals. Teachers are not going to work, look at the states of our roads. This is a failed banana republic presided by a fascist clique that are clueless they are incompetent and that is extremely corrupt."

The once-prosperous southern African country’s economy is so weak from de-industrialization, low investment, low exports and high debt that it does not generate an adequate inflow of fresh greenbacks needed for its largely dollarized local economy.

END_OF_DOCUMENT_TOKEN_TO_BE_REPLACED 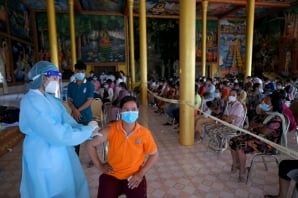