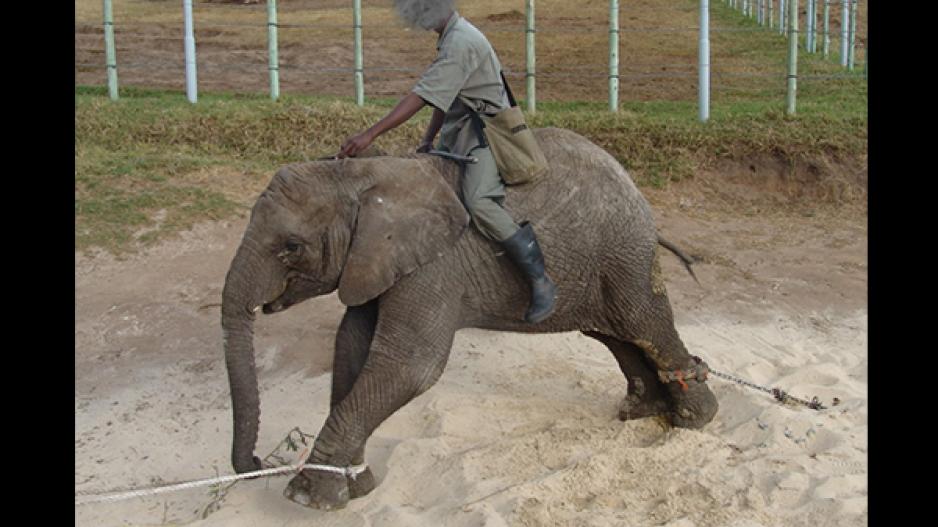 A photograph showing the stretching of an elephant. This allegedly took place at Knysna Elephant Park. The NSPCA has laid charges of abuse at the Park.

JOHANNESBURG - The National Council of SPCA’s (NSPCA) has laid criminal charges against a well-known elephant sanctuary in Knysna for extreme cruelty to animals after photographs emerged showing wounded elephants.

The Knysna Elephant Park, part of the Elephants of Eden group before it moved from the Eastern Cape to Knysna, offers visitors a range of experiences with elephants – from close encounters (their ‘Be Touched by an Elephant tour) to exclusive walks, rides and even a sleepover with elephants.

The park is owned by Lisette and Ian Withers, who claim on their website that the training done with their elephants is extremely gentle, born out of growing trust between each animal and its handler.

But the NSPCA on Monday announced that after long-term investigations into the sanctuary, it was now in possession of video footage of extreme cruelty and inhuman practices ongoing at the park.

“The NSPCA has laid animal cruelty charges against Elephants of Eden, the Knysna Elephant Park,their directors and management including Lisette Withers, in terms of the Animals Protection Act, 71 of 1962 for cruelty to elephants,” animal inspector Wendy Willson announced.

The NSPCA posted photographs of the abuse on Monday morning. Lisette Withers said the of the allegations that the NSPCA are only interested in sensationalism and money,

”They are stealing every old woman’s pension money. I despise them, they set things up and act like watchdogs, they think they are Gods,” said Withers.

Willson said the NSPCA was in possession of “horrific footage” depicting the cruel and abusive training methods employed to control and train baby and young elephants for captive lives in the elephant-based tourist industry.

Withers has admitted that the incident did take place at the Elephants of Eden in Alexandria in 2008 but she was unaware of it until two weeks later. "We healed the elephants and got rid of staff involved," said Withers.

“My staff apologized for their cruelty but said the spirits told them to do it,” said Withers.

According to Willson, the footage – which she has declined to release because it will form the basis of their court case, although she has given out still pictures with faces blurred – shows young elephants being chained, roped and stretched.

Stretching, she said, was a training method in which elephants had ropes and chains attached to their front and back legs as winches and vehicles were used to then stretch them out into an extremely uncomfortable position.

“The elephant quickly becomes extremely exhausted and collapses, and that is how they teach them to go down,” Willson said, explaining that elephants obediently going down was necessary for the elephant ride attractions on offer.

On top of this, Willson said the NSPCA had added proof that the elephants were also shocked with electric cattle prods and hit with bull hooks – a stick with a sharp end and a hook on the side, used to strike the animal on its most sensitive spots such as behind the ear.

"The elephants show signs of crippling injuries with severely swollen legs and feet, debilitating abscesses and wounds resulting from the abusive use of ropes, chains, and bull hooks. The calculated and premeditated cruelty of this nature that took place at this facility is a far cry from the loving sanctuary image that Elephants of Eden/Knysna Elephant Park like to portray,” said Willson.

The footage was taken on the premises of Elephants of Eden, situated in the Eastern Cape before the facility and its remaining elephants moved to the Western Cape to join the Knysna Elephant Park.

Wilson said the footage was crucial evidence, as although they had other reports from park visitors, these were difficult to handle because people were unable to identify specific park staff members or particular elephants.

“It was absolutely horrible – I felt sick. That’s not how we treat our elephants but when you turn your back sometimes these things happen” said Withers.

Withers told eNCA.com that this would never happen at the Knysna premises because there are people around 24 hours a day, guests and staff so it would not happen again.

Asked what she hoped to achieve with the court action, Willson said she did not believe the Withers should be allowed to continue owning baby elephants – as she believed they currently had in excess of nine babies at the park.

She said at least two of the elephants had killed people in the past. The park’s most famous bull, a 26-year-old four-ton elephant named Harry, trampled handler Tobias Ndlovu to death on June 21, 2005.

In a second incident he attacked guide and handler Arnold Ndzwanana on June 4 2011, flinging him in the air and trampling him in front of visitors. The attack lasted about 10 minutes and resulted in Ndzwanana suffering numerous fractures, blood loss and the amputation of his shattered left leg.

“You can do anything to these elephants but just don’t piss them off, and unfortunately that’s what these guys did,” said Withers.

The experiences offered by the Knysna Elephant Park range from the R250 elephant encounter to R885 for a ride, R1 250 for an “exclusive ride” up to R1,950 for a sleepover with elephants.

Willson meanwhile said a charge of obstruction had been laid against Wtihers after she tried to block NSPCA inspectors from entering the park.

Withers explained that is because the NSPCA tried to access the Elephants of Eden farm after they had sold it. “We weren’t hiding anything or removing chains from elephants.”

She said it took time to get open the gates because of the red tape as they weren’t the owners anymore.

When NSPCA inspectors came to the Knysna Elephant Park farm Withers admitted that she didn’t let them in because she felt fed up.

“I got sick and tired of them, if they want to see what we do they can pay an entrance fee,” said Withers.

Wilson said the NSPCA was waiting for a trial date, and called on any visitors who had witnessed any kind of wrongdoing at the park to come forward.

“People can remain anonymous. They can give us footage or information – even the smallest thing could be a piece that fits into the greater puzzle,” she said.