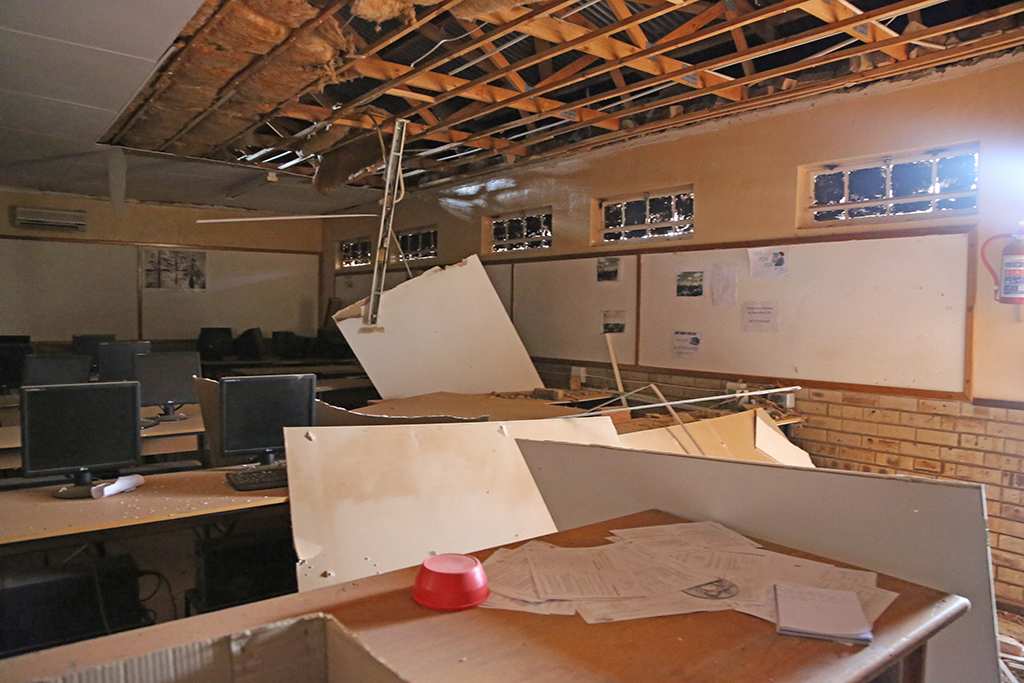 Damage is shown to the computer laboratory at Vuyani Mawethu school near Orkney, which was the epicentre of the 5.5-magnitude earthquake that hit South Africa on Tuesday.

JOHANNESBURG – How and why did the 5.5 magnitude earthquake that shook South Africa on Tuesday happen, and is there a chance there will be more?

Research and technical director of Umvoto Africa, Chris Hartnady, believes that while the quake was destined to happen, mining activity in the area near the epicenter of the quake caused it to happen sooner than it ordinarily would have.

And another expert believes we can expect more tremors and possibly another quake of the same magnitude.

According to Hartnady, there was a sideways slip along an east-west fault. This caused a shifting of a vertical – “or near vertical” – fault that saw “the northern block move about 10cm to the east”.

This movement, he said, was consistent with the known forces associated with the rift system.

“It was about 10 000 times larger than the average mine tremor,” he said, explaining that mining tremors generally registered around 2.5 or 3 on the Richter scale.

Hartnady said in the long term, “the ground under us” is being rifted apart by shearing.

“In South Africa the Trignet system shows us that the internal rates of motion are not more than about half a millimetre a year. So in other words, to build up something like 10cm of strain along a particular fault takes at least a few hundred years,” said Hartnady.

The process was going on extremely slowly, but constantly. And mining activity was a disturbing factor.

“The important thing is that activity like mining, particularly deep mining that disturbs the stress field in these highly stressed area can trigger quite large events.”

According to Hartnady, the focus of Tuesday’s seismic event was well below mining depth – at an estimated 10kms underground. But the forces associated with mining – the release of strain underground transferring to deeper areas – were what triggered the large earth quake.

“It was waiting to happen at some stage but the human intervention in the form of mining brought it forward,” he said.

Michelle Grobbelaar, manager of the Council for Geosciences in South Africa’s seismology unit, said more tremors and aftershocks could be expected in coming days.

"We are monitoring. It will continue for days, if not months," she said.

"More tremors are expected. We can expect one of the same magnitude in future, we just don&39;t know when. We cannot predict."