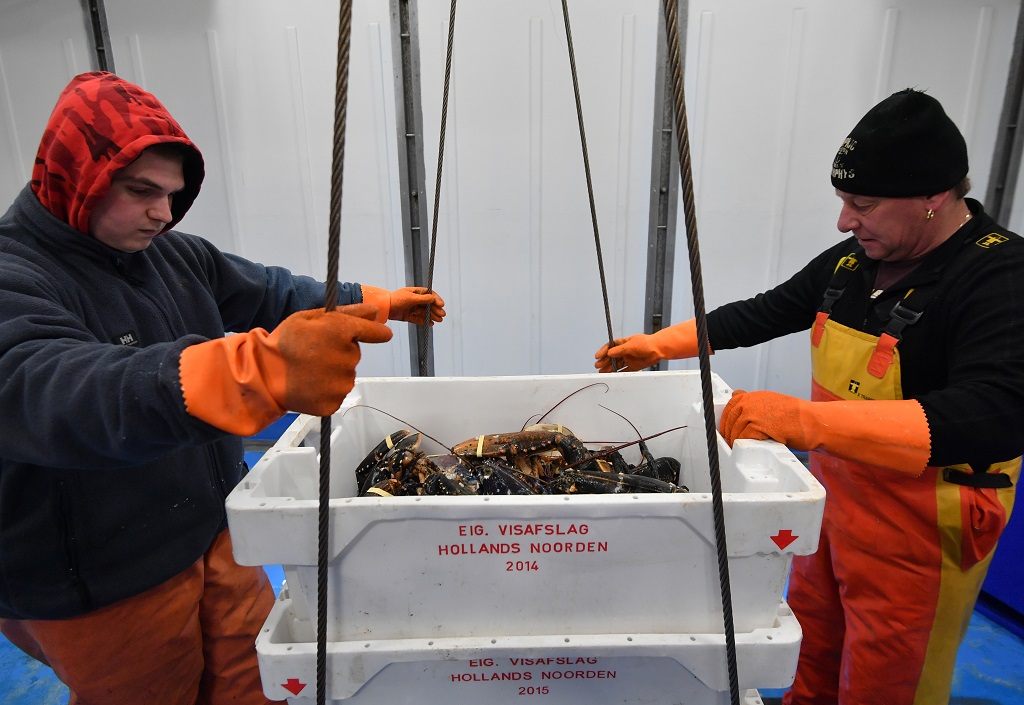 Fishermen unload their catch from Dutch fishing boat Klasina in Den Helder, in the Netherlands' North Holland province, on February 15, 2019. For decades Dutch fishermen from the remote northern island of Texel, have been allowed under European Union rules to pull their hauls from British waters. Now, weeks before London is set to leave the EU, hundreds of them say a divorce without a deal would be catastrophic.

Den Helder, NETHERLANDS - It's a beautiful spring morning on an unusually calm North Sea, but from the wheelhouse of his trawler Dutch skipper Cor Vonk can see a man-made storm brewing.

For decades Dutch fishermen like Vonk and his family, from the remote northern island of Texel, have been allowed under European Union rules to pull their hauls from British waters.

Now, weeks before Britain is set to leave the EU, Vonk and hundreds of others like him say a divorce without a deal would be catastrophic.

At dawn, his boat, the Klasina, docks in the northern Dutch harbour of Den Helder and offloads more than four tonnes of fresh sole and plaice -- freshly caught off Dover's famous white cliffs on England's southeastern coast.

It's routine work but Vonk, 35, knows that the fish taken from the bowels of his trawler under his careful eye could well be some of the last before Brexit ruins the family business.

British government ministers have repeatedly talked of Britain becoming an "independent coastal state" and "taking back control of our waters" after Brexit.

As the clock ticks towards Britain's scheduled exit from the EU on March 29, the risk of a disorderly exit grows by the day.

In guidelines for the event of Britain leaving the EU without a deal, Britain says that "non-UK-registered vessels will no longer have automatic access to UK waters".

That could shut the door on Vonk and other Dutch trawlers who harvest sole and other bottom fish off the sandy Channel floor near Dover.

Some 100 Dutch trawlers operate in these waters, each carrying a crew of five to six members.

Many will go bankrupt

The Dutch fishing industry as a whole is nervous about the prospect of a no-deal Brexit, despite pledges by Brussels to compensate fishermen.

"Around 60 percent of the Dutch fleet's revenue is from British waters. But for certain ports it is about 70 percent," Pim Visser, director at the Dutch commercial fishing federation VisNed, told AFP.

This rung true for the Vonk family, whose trawler has chugged out of port every Sunday night for a four-day stint, captained by four generations of Vonks.

Cor, a fisherman for 17 years, took over from his father Arie, a stocky Dutchman with long hair and a golden earring.

Now retired, Arie still joins his son at dawn on a Friday, when the trawler steams into Den Helder to offload the catch at an auction house.

Arie Vonk "doesn't get anything" about Brexit, and his son dreads the worst.

"Closing British waters will be a drama," Cor Vonk said, standing in the wheelhouse of the Klasina -- named after his mother. The boat cost him between one and two million euros, while a new trawler of its type costs up to seven million ($8 million).

"If we have to share all the fish in Dutch waters, we'll be fishing on a postage stamp."

On Texel alone, 10 trawlers feed 60 families -- and they are dependent on the catch from British waters.

Vonk's two sons aged nine and six dream of following in their dad's footsteps. But after Brexit, there may be no family business left.

"Many fishermen will go bankrupt, and perhaps us too," Vonk mused.

Sea belongs to all

Across the Channel, many British fishermen are in favour of Brexit, which they say will help them take back control of their territorial waters.

Vonk said Dutch fishers never meet their British colleagues when out at sea and who don't understand the "mayhem" it's causing.

"For us, the sea belongs to all, so we don't understand why we should go," he said.

Brexit could compound a separate blow for Dutch fishermen, after the EU recently decided to ban the Dutch method of electric pulse fishing from 2021.

"We are at the mercy of politics," sighed Vonk.

VisNed's Pim Visser-- whose surname means fisher in Dutch -- said that, if barred from British seas, there could be a "domino effect" whereby Dutch trawlers end up overfishing local waters.

"That's a domino effect, which is really disastrous."

Visser also slapped down the idea of "national waters" that has become a resounding theme in the British Brexit debate.

"These fish spawn in Danish waters, grow up in Dutch waters and are then caught in British waters," he said.