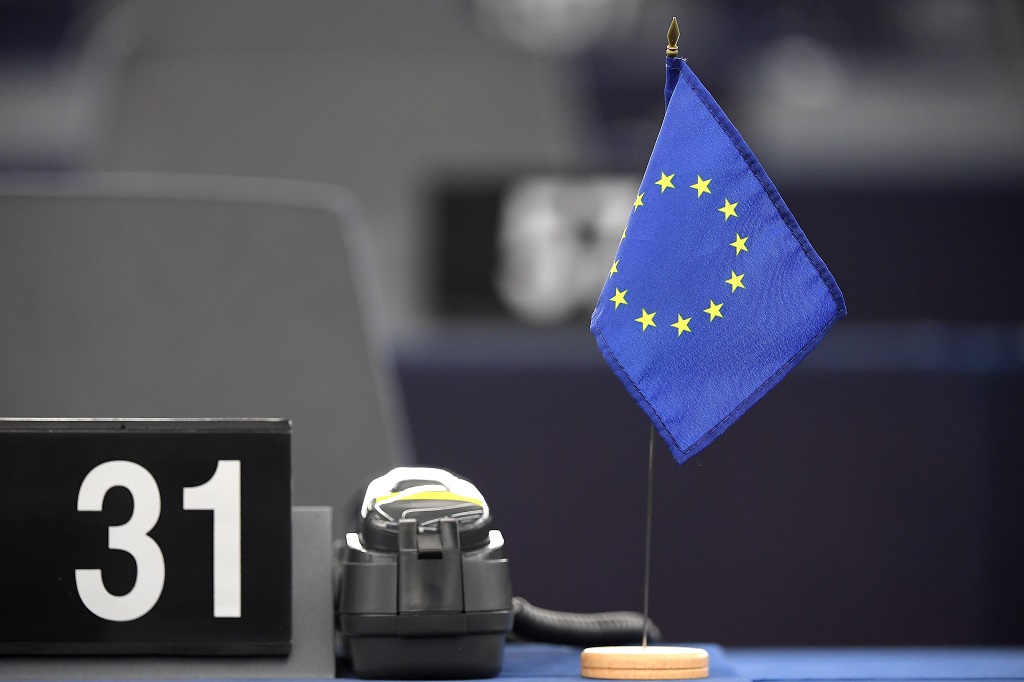 The European flag is placed on the desks of European MPs ahead of a debate at the European Parliament in Strasbourg, eastern France, on September 17, 2019.

BRUSSELS - European Union members agreed on Monday to postpone Brexit for up to three months, stepping in with their decision less than 90 hours before Britain was due to crash out with no divorce deal.

The next deadline for departure will be January 31 next year -- although the other 27 capitals would allow an earlier date if London ratifies a withdrawal agreement before then.

"The EU27 has agreed that it will accept the UK's request for a Brexit flextension until 31 January 2020," the president of the European Council representing member states, Donald Tusk, tweeted.

"The decision is expected to be formalised through a written procedure," he said, after ambassadors met in Brussels to approve the extension.

According to a copy of the agreement seen by AFP, if Prime Minister Boris Johnson convinces the UK parliament to approve an amicable divorce accord before next year, Brexit could be on November 30 or December 31.

But in the meantime London must nominate a senior official to serve on the next European Commission and must agree that the withdrawal agreement it struck last month will not now be renegotiated, according to the EU text.

Leaving the ambassador's gathering, EU negotiator Michel Barnier said it had been a "short and efficient and constructive meeting," adding: "I'm very happy that a decision has been taken."

A delay could have been agreed last week, but Paris was reluctant, concerned it would do nothing to boost the chances of Britain deciding how to handle the end of its five-decade relationship with the EU.

Johnson had been pushing for a definitive break on October 31 after finally striking a withdrawal deal with fellow EU leaders at an October 17 summit.

But he has yet to persuade sceptical British MPs to ratify the accord, raising the spectre of a chaotic "no-deal" Brexit and severe economic disruption in the United Kingdom.

In the meantime, he is trying to break the logjam -- and strengthen his tenuous grip on office -- by demanding an early election to secure a parliamentary majority.

But the British opposition has been reluctant to deliver the two-thirds vote needed to approve a snap poll until the threat of a disorderly Brexit is off the table.

The expected decision to postpone Brexit beyond the end of the month would do this, but Paris wanted EU capitals to wait until the UK election timetable was clear.

On Monday, however, European diplomats told AFP they would wait no longer and would make a decision without further delay after Britain agreed it would not try to change the withdrawal deal.

"The conditions of the extension have been specified and reinforced, notably on the fact the deal is not renegotiable," a French diplomatic source told AFP in Paris.

Later Monday, Johnson was to ask the House of Commons to vote on a snap election, which he wants to hold on December 12 -- after MPs have had time to ratify his Brexit deal.

However, he faces defeat on that move, as with his two previous election calls.

He needs the support of two-thirds of the 650 MPs, but does not have even a simple majority.

The Labour party dislikes Johnson's Brexit deal and says it will not back an election until his threat of leaving the EU with no deal at all is removed.

More than three years after Britons voted 52-48 percent for Brexit in a 2016 referendum, the country and parliament remain divided.

Johnson, a leader of the "Leave" campaign, took office in July this year vowing to take Britain out of the European Union on October 31 whatever happens.

But MPs rebelled against his threat to sever 46 years of ties without a deal and passed a law requiring him to seek a delay if they refused to accept his divorce terms.