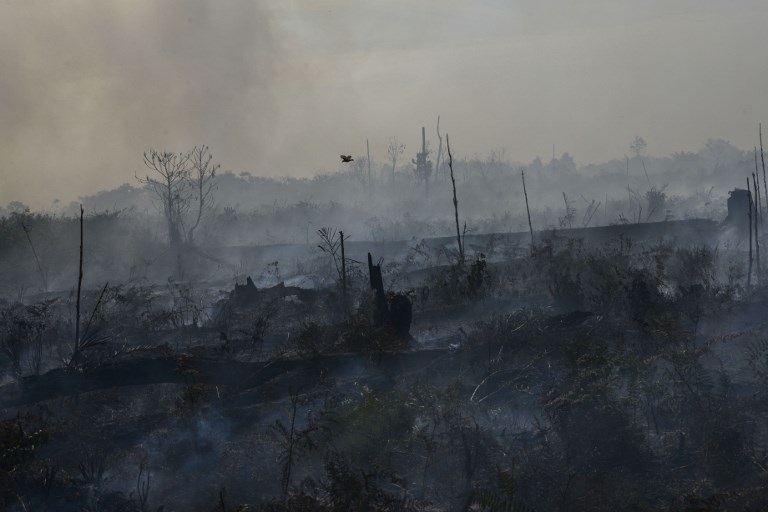 This picture taken on July 26, 2017 shows the aftermath of the peat forest fire at Meulaboh, Aceh province.

Citing government data, the environmental group said it examined 11 civil court cases between 2012 and 2018 where palm oil and pulp-and-paper companies were ordered to pay fines to Jakarta.

"However, not one of these forests cases has resulted in compensation being paid," Greenpeace said.

The cases were mostly linked to damage from fires that tore through Indonesia in 2015, causing as much as $16-billion in damages to forestry and agriculture, as well as to tourism and other industry, it added, citing World Bank figures.

The 2015 blazes destroyed some two million hectares of land and sparked a massive haze outbreak over Singapore and Malaysia, leading to diplomatic frictions.

A US academic study estimated that the crisis may have led to more than 100,000 premature deaths.

"Until today not one company has paid compensation for their role in this catastrophe," Greenpeace said.

Most of the $1,3-billion in penalties were attributed to the single case of a firm found to have been engaged in illegal logging that saw vast tracts of forest destroyed.

Unpaid compensation is money owed to Indonesians and could be used for large-scale forest restoration and to prevent future damage, it added.

The environment ministry did not immediately respond to requests for comment on the report.

The country's commodities-driven economy depends heavily on agricultural, forestry and mining activities that have been accused of causing widespread environmental damage.

Indonesian plantation companies which have been fined for burning huge areas of land since 2009 have failed to pay hundreds of millions of dollars in penalties meant to hold them accountable for actions that took a devastating environmental and human toll.