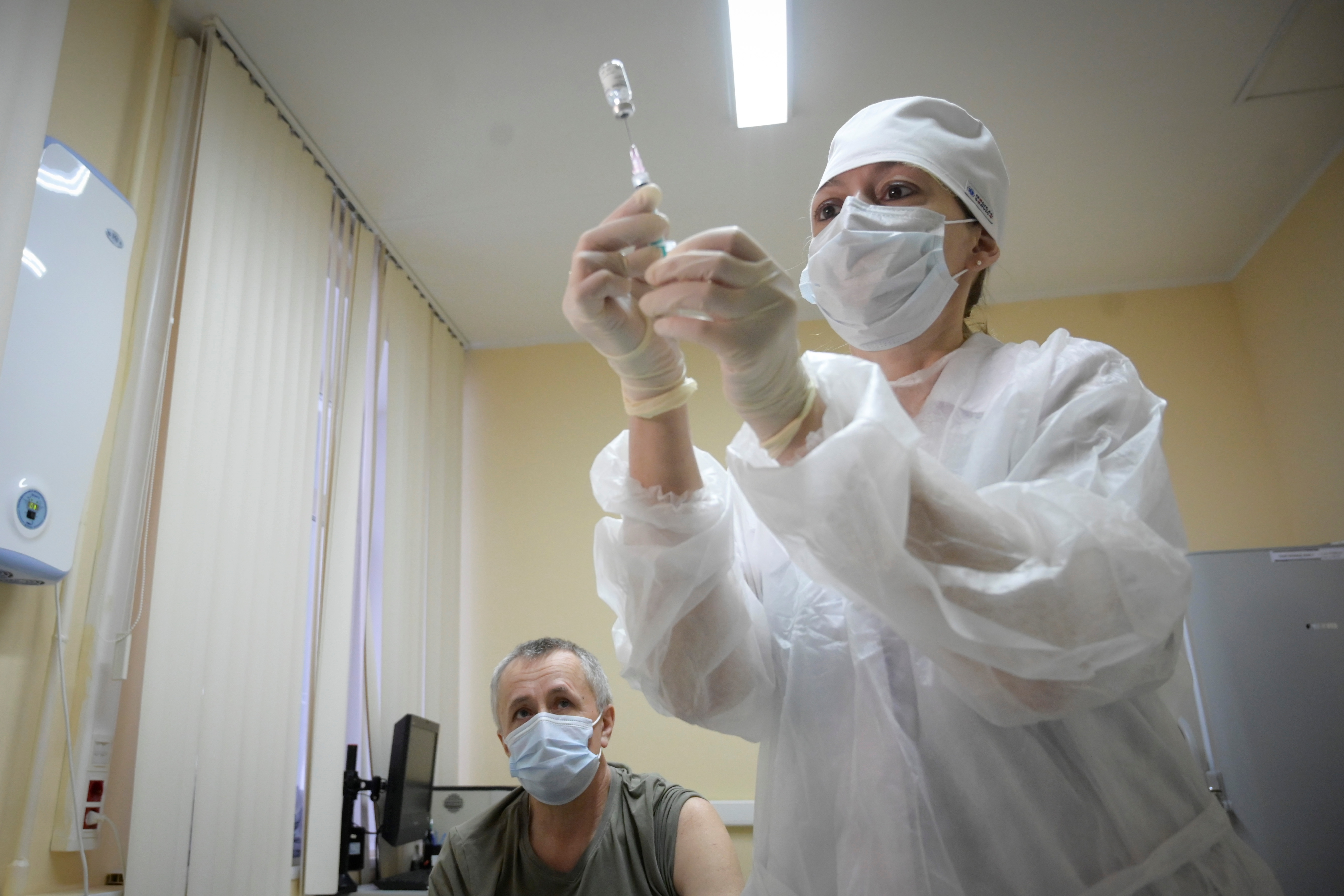 File: A nurse prepares a dose of the Sputnik V (Gam-COVID-Vac) COVID-19 vaccine for a patient at a clinic in Moscow on December 30, 2020, as the country started its vaccination campaign for people aged 60 and over, to fight against the spread of the novel coronavirus. Natalia Kolesnikova/AFP

MOSCOW - Moscow savoured its scientific and political win on Wednesday after a top medical journal declared the Sputnik V Covid vaccine highly effective, and said it was working to increase the production of the jab abroad.

Momentum was building towards a rollout in Europe as both Germany and Spain said they were open to taking deliveries of the vaccine.

The Lancet journal published results on Tuesday showing the homemade Russian vaccine - named after the Soviet-era satellite - to be safe and 91.6-percent effective against symptomatic Covid-19 cases.

The shot faced Western criticism last year when it was approved in Russia before large-scale clinical trials.

The development represents a major scientific and political victory for President Vladimir Putin, who has called Sputnik V the world's best vaccine.

The latest results have also allayed some Western concerns over the transparency of the Russian jab and increased hopes for ending the pandemic, as many European nations struggle with rolling out their vaccines.

In a call with reporters Wednesday, Kremlin spokesman Dmitry Peskov said The Lancet article demonstrated the "reliability and effectiveness of the Russian vaccine".

"And besides that, (it) probably also confirmed the justification of the accelerated registration of this vaccine in the Russian Federation," he said, adding that the jab's safety was "proven".

On Wednesday, the banner headline of the pro-Kremlin Izvestia daily's front page celebrated the "successful launch" of the jab.

"Russian 'Sputnik V' has been recognised as the safest vaccine," the newspaper said.

Russia registered Sputnik V - a two-dose vaccine using adapted strains of the adenovirus, which causes the common cold -- in August, months before Western competitors and even before large-scale clinical trials.

Its developers later said the vaccine is over 90 percent effective and Russia began inoculating citizens in December.

Sputnik V has been approved in more than 15 countries, including several ex-Soviet republics but also Argentina, Tunisia and Pakistan.

The Russian Direct Investment Fund (RDIF), which helped finance Sputnik V, has said that more than two million people have been inoculated with the jab around the world.

Peskov said Russia was working to further boost production of the vaccine in foreign nations.

"The number of countries that register this vaccine at home is increasing every day," he said. "We are very active in responding to enquiries from various countries asking for the supply of this vaccine."

Rather than exporting Sputnik V in bulk, Moscow hopes to develop production partnerships with local factories.

Brazil, India, Kazakhstan and South Korea are currently producing the jab, though not all them have made it available to the public yet.

RDIF applied for registration of Sputnik V in the European Union last month and German Chancellor Angela Merkel has expressed willingness to its use once the jab receives the regulatory nod.

German biotechnology company IDT Biologika told AFP it was in touch with RDIF over jointly producing the vaccine, while Spanish Health Minister Carolina Darias said Madrid would "wholeheartedly welcome" the jab so long as it was approved.

The EU is facing anger over a sluggish start to its mass vaccination campaign and member state Hungary has already registered the Sputnik jab on its own.

While Moscow has aspirations for Sputnik V to increase its geopolitical clout, Peskov emphasised that "priority is given to Russia's domestic needs".

But beyond its capital and largest city Moscow, where Mayor Sergei Sobyanin estimated Saturday that some 300,000 people had already been vaccinated, Russia has struggled with rolling out Sputnik V.

On Tuesday, the governor of the northwestern Leningrad region, surrounding the country's second-largest city Saint Petersburg, said it had used up its first 10,000 vaccine doses and was now waiting for additional supplies.

By Wednesday, Russia had reported 3.9 million coronavirus infections -- the fourth-highest caseload in the world.

However, Russia faces a population sceptical of getting vaccinated, with recent surveys showing only 38 percent of respondents were prepared to be inoculated against Covid.

Some critics have pointed to the fact that Putin has yet to have the jab.

Peskov dismissed those concerns. "In general the perception of the vaccine is at a good level," he said.