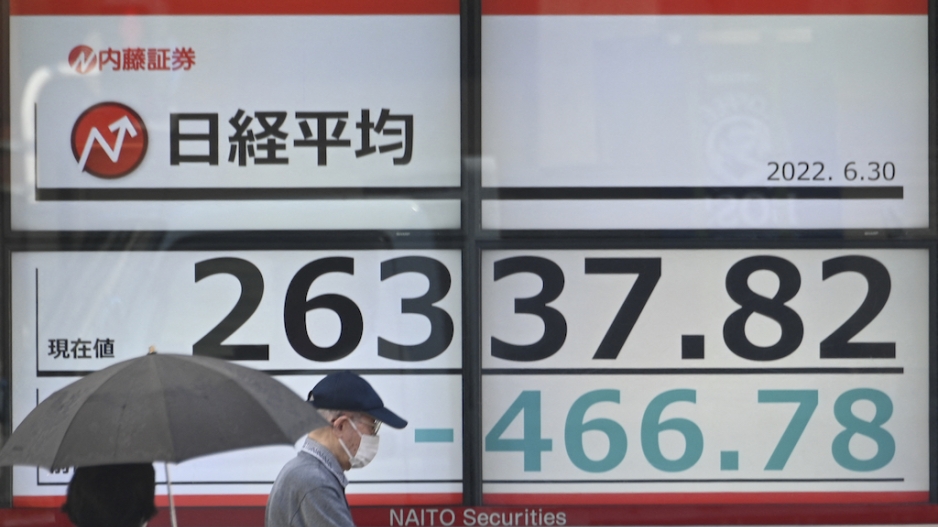 File: Pedestrians walk in front of an electronic share price board showing the numbers on the Tokyo Stock Exchange. AFP/Kazuhiro Nogi

LONDON - Stock markets sank and oil prices plummeted as fears mounted that major economies will slide into recession as inflation soars, with the euro slumping towards parity with the dollar.

"Fears about the health of the world economy are circulating and that is why we are seeing major declines in stocks, energies, and industrial metals," said market analyst David Madden at Equiti Capital.

"Worries about rising inflation, higher interest rates and slower economic growth are hanging over the markets," he said.

European stock markets fell nearly three percent, while on Wall Street the Dow was down around two percent in late morning trading.

The euro sank to a 20-year dollar low of $1.0238 on recession fears and as investors eyed aggressive interest rate hikes by the US Federal Reserve in its fight against inflation, in contrast with the European Central Bank, seen as planning more modest increases.

"There are increasing worries the elevated energy prices will chip away at demand, hence the fall in the oil contracts, said Madden.

Sentiment in Europe was shaken from the latest survey data showing economic growth in the eurozone floundered in June.

S&P Global's closely-watched monthly purchasing managers' index (PMI), which measures corporate confidence, fell to 52.0 in June from 54.8 in May.

Nevertheless, the reading, which was a 16-month low, remains above the 50-point level signalling expansion.

"Growing fears of a recession are hammering the euro lower, whilst the dollar is soaring on bets that the Fed will keep hiking rates aggressively to tame inflation," City Index analyst Fiona Cincotta told AFP.

"Today's PMI data from Europe have highlighted the risk of slowing growth at the end of the second quarter and raise the prospect of a contraction in activity in the coming months."

Walid Koudmani, chief market analyst at XTB, said "the ECB is caught between a rock and a hard place as it needs to raise interest rates to tackle inflation and boost its currency while simultaneously supporting struggling economies which are just recovering after two years of pandemic related issues."

The mood on trading floors has become increasingly gloomy in recent months as observers warn that sharp interest rate hikes aimed at curbing price rises could cause a contraction, compounding uncertainty caused by Russia's war in Ukraine.

By contrast, most Asian stock markets closed higher on growing speculation that US President Joe Biden is about to roll back some of the Trump-era tariffs on Chinese goods.

Investors were keeping tabs also on fresh Covid outbreaks in China that have triggered city-scale lockdowns.