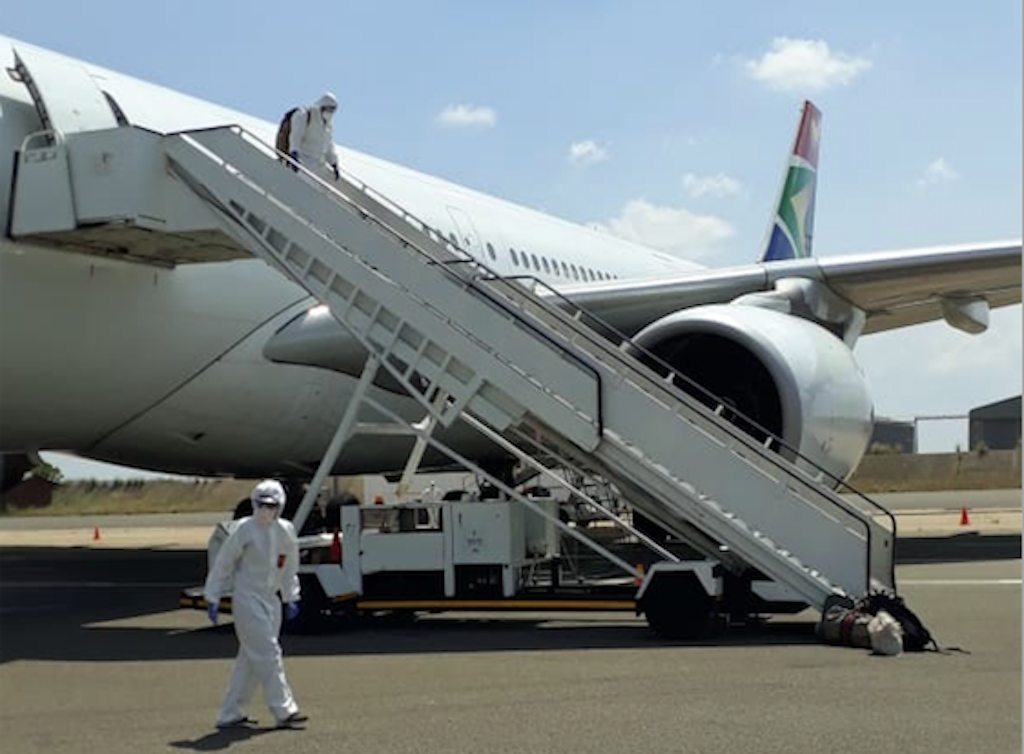 The crew bringing South Africans home from China are in good spirits.

China holds a special place in the economy of Africa's most industrialised country which slid into recession in the last quarter of 2019.

Around 18.5 percent of South African exports go to China, with mining commodities making up the majority -- at around 86 percent -- of total trade with the Asian country.

"Iron ore, manganese and chrome account for two thirds of South Africa's total exports to China by value," a recent report by Strategy&, a subsidiary of Price Waterhouse Cooper, found.

With China's growth expected to slow as a result of COVID-19, the demand for minerals is also expected to take a knock potentially affecting commodity prices and costing the industry millions.

The International Monetary fund has forecast a one percent decline in growth in the Chinese economy due to coronavirus.

"A Chinese economy with a weaker growth pace and slower metals production will have less demand for these minerals from South Africa. The listed shares of some of the world's largest mining companies have already been hit by this outlook," it said.

It slipped into recession in the final three months of 2019, the second contraction to hit the economy in as many years. That contraction was largely blamed on erratic electricity supplies.

The second recession the continent's most industrialised economy has suffered since President Cyril Ramaphosa came to power in 2018, poses more headaches for the reformist leader.

The virus "will turn out to be a national crisis" and "it will have a huge impact... on our economy which as we all know is in a very precarious situation," he said when the first case was detected last week.

Growth in South Africa for all of 2019 was just 0.2 percent, its lowest since the global financial crisis in 2009.

The second-strongest economy in Africa behind Nigeria, South Africa is the world's top producer of platinum and a leading supplier of gold, diamonds and other minerals.

However, mining has shed about 300,000 jobs in recent years. Unemployment rate is creeping towards 30 percent.

A report by Trade and Industrial Policy Strategies, a Pretoria-based independent economic research institution, predicts that "if the downturn in China persists or deepens, South Africa's mining industry in particular will suffer significant losses".

On the flip side of the forex cash cows is the tourism industry.

According to the World Travel and Tourism Council, the sector contributes 10 percent of South Africa's GDP, raking in billions of dollars.

China is ranked the seventh largest origin of foreign visitors to South Africa with 97,000 tourists holidaying at the country's game reserves and other sites in 2018.

While it is difficult to quantify the potential impact on the tourism industry as yet, Strategy& has looked at past pandemics such as Swine Flu, which saw a 15 percent drop in Chinese arrivals.

South Africa has so far imposed no travel bans on Chinese visitors, but Beijing has blocked outbound group travel from China.

"Despite the fact that we have had very few cases of the virus, the local tourism industry has already suffered serious losses," lamented Tourism Minister, Mmamoloko Kubayi-Ngubane, said earlier last week.

"Undoubtedly these losses are still going to increase. Whatever happens, the truth of this situation is the virus will have a negative impact on the tourism sector, at least in the short to medium term."

The South African fisheries industry was one of the first casualties after China halted animal imports.