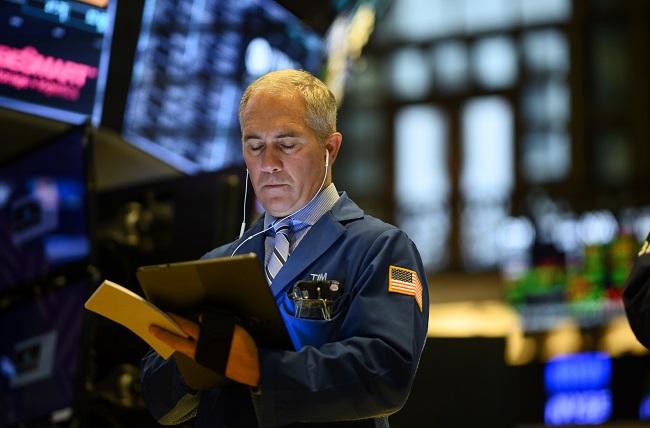 File: Major US cities such as New York have also put strict containment measures in place and on Thursday California announced a curfew across almost all of the state. Johannes Eiselle/AFP

PARIS - Global stock markets moved gingerly Friday, with Europe posting modest gains while Wall Street dipped as traders weighed coronavirus vaccine hopes against lockdowns and the lack of a new US stimulus accord.

In afternoon trading, London's benchmark FTSE 100 and eurozone big-hitters Frankfurt and Paris all saw their indices rise less than half of one percent.

"Tentative European gains this morning appear to maintain the ongoing consolidation phase, as markets tread water in the wake of the vaccine boost," Mahony added.

As hopes grow that virus vaccines are only weeks away from approval, shares in US giant Pfizer rose almost two percent as the firm and German partner BioNTech prepared to file an emergency request for authorisation to roll theirs out and help defeat a disease that has killed almost 1.4 million people and infected almost 57 million.

Given the degree to which the virus has upended the world economy, traders are also closely monitoring the prospects of a US stimulus accord materialising after the president of a regional Federal Reserve bank warned Thursday the United States could see growth contract again in the fourth quarter.

In the aftermath of the presidential election, moves to agree a new stimulus package to support the virus-ravaged US economy remain deadlocked.

"The move by the Department of Treasury to allow some of the Fed's emergency lending programs to expire at the end of the year is also garnering attention but the market reaction thus far has been muted," said analysts at Charles Schwab brokerage.

Wall Street's main indices opened to the downside, with the Dow slipping 0.2 percent in the first couple minutes of trading.

Markets have also been buffetted by fears of where the virus is going as infections and deaths continue to mount and with European governments forced to impose fresh lockdowns.

Major US cities such as New York have also put strict containment measures in place and on Thursday California announced a curfew across almost all of the state.

Meanwhile, Tokyo has raised its virus alert to the highest level.

"There's the push-pull of short-term versus long-term and that's what investors are looking at right now," Chris Gaffney, at TIAA Bank, said. "There are some very serious risks in the short term, especially with the lockdowns."