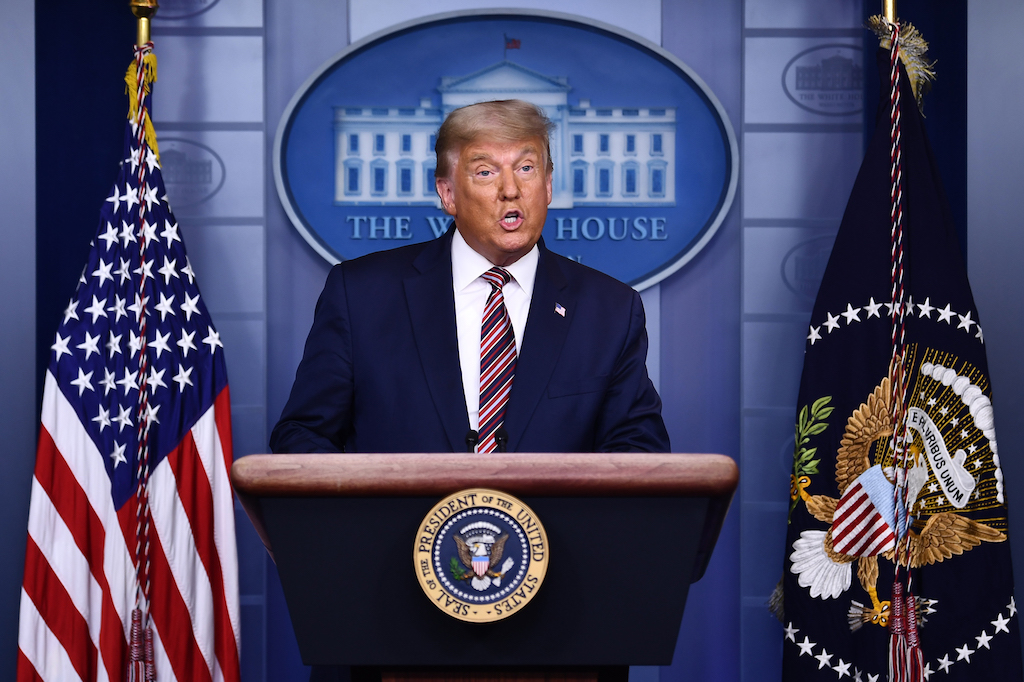 KUALA LUMPUR - US President Donald Trump attended an online Asia-Pacific summit Friday even as he challenged his election defeat, while China's Xi Jinping used the forum to counter American protectionism.

The Asia-Pacific Economic Cooperation (APEC) gathering, held virtually this year due to the Covid-19 pandemic, brings together leaders from 21 Pacific Rim economies, accounting for about 60 percent of global GDP.

China -- which came into the summit days after scoring a huge trade pact victory -- has become the main driving force behind the grouping after the United States began withdrawing from multilateral bodies during Trump's presidency.

But Trump made the surprise decision to take part in this year's event, after not participating at APEC since 2017, and appeared on Friday alongside other leaders via video link.

All of the leaders except one had an official APEC backdrop on their screens, which was blue and featured the enormous, green-domed Malaysian prime minister's office.

The exception was Trump, who appeared with a beige background under the US presidential seal.

A source involved in arranging the summit said Trump refused to use the official backdrop.

He delivered a speech to fellow leaders during the two-hour event, but it was not open to the media.

Analysts said Trump likely decided to appear at APEC this year to present himself as presidential as he pursues legal challenges against election winner Joe Biden.

His appearance was all the more striking as the United States broke with tradition by failing to send a representative to deliver a public speech at the forum ahead of Friday's official summit.

Trump's turn away from multilateral groupings like APEC has left the floor open for China to write the Asia-Pacific's rules of commerce, and Xi used his speech at Friday's summit to launch a strident defence of free trade.

"It is important that the Asia-Pacific should remain the bellwether in safeguarding peace and stability, upholding multilateralism, and fostering an open world economy," he said, according to Chinese state broadcaster CCTV.

"Free and open trade and investment cannot be achieved overnight."

His remarks will raise eyebrows however in capitals where Beijing has been accused of blocking trade amid diplomatic rows, and using its enormous economy as a bargaining chip to strongarm weaker rivals.

Xi also said China would also consider joining the Comprehensive and Progressive Agreement for Trans-Pacific Partnership -- a giant regional free trade pact that had once been championed by the United States under Barack Obama but then abandoned by Trump.

This year's APEC gathering came a week after China and 14 other Asia-Pacific countries signed another free trade pact, the Regional Comprehensive Economic Partnership (RCEP), which will be the world's biggest.

The deal, which excludes the US, has been viewed as a major coup for China and further evidence that Beijing is setting the agenda for global commerce as Washington retreats.

Signatories hope RCEP will help their virus-hit economies on the road to recovery, and many leaders at the APEC forum warned against turning inwards in response to the pandemic.

"We need to trade and invest our way out of the current economic downturn," Malaysian Prime Minister Muhyiddin Yassin said in his opening remarks at Friday's summit.

"We must come together and work constructively towards navigating the region along a path of robust, inclusive and sustainable economic recovery and growth."

At the end of the summit, the leaders released a joint declaration that pledged their determination to work together to recover from the pandemic.

Even agreeing a statement was progress compared with the leaders' previous summit in 2018, when they were unable to hammer out a joint communique due to escalating tensions between the US and China on trade.