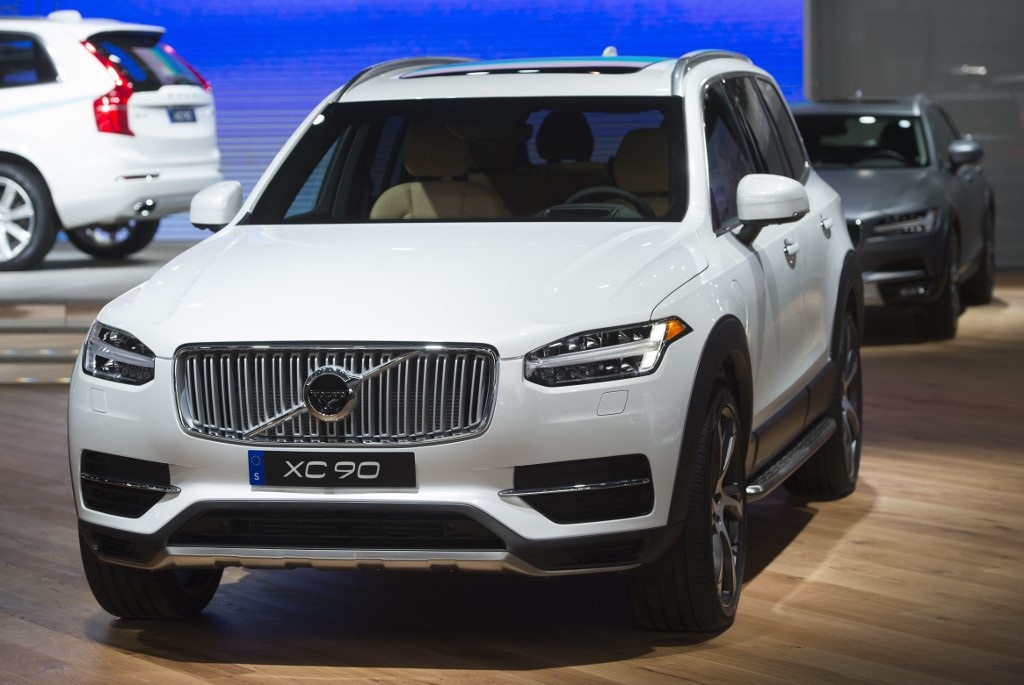 The Volvo XC90 SUV is seen during the 2017 North American International Auto Show in Detroit, Michigan.

WASHINGTON - Uber Technologies Inc unveiled its newest Volvo self-driving car in Washington on Wednesday as it works to eventually deploy vehicles without drivers under some limited conditions.

Uber said the new production XC90 will be assembled by Volvo Cars in Sweden and have human controls like steering wheels and brake pedals, but also with factory-installed steering and braking systems designed for computer rather than human control.

Uber Advanced Technologies Group chief scientist Raquel Urtasun showed off the company's artificial intelligence technology that allows it to drive autonomously for long distances on highways without maps and "on the fly" to plot its course and navigate construction zones.

"Our goal is get each one of you to where you want to go much better, much safer, cheaper," Urtasun said.

As the race to push out autonomous cars across the globe heats up, other companies are also working to deploy self-driving vehicles in limited areas.

The No. 2 US automaker also opened a research center in Tel Aviv, joining a growing number of major automakers and suppliers setting up shop in Israel's tech hub.

General Motors Co in January 2018 sought permission from US regulators to deploy a ride-sharing fleet of driverless cars without steering wheels or other human controls before the end of 2019, but is still struggling to win regulatory approval.

Alphabet Inc's Waymo unit is operating a robotaxi service in Arizona and said last month it is partnering with Lyft Inc to serve more riders.

South Korea's Hyundai Motor Co and Kia Motors Corp both said they would invest in the self-driving car software startup Aurora and speed up development of their respective autonomous vehicle technologies.

Carmakers have struggled to maintain profit margins faced with the rising costs of making electric, connected and autonomous cars. As a result, they are setting up alliances and lining up outside investors to combat spiraling development costs.

Previously, Uber had purchased about 250 Volvo XC90 SUVs and retrofitted them for self-driving use.

The new vehicles - known by the internal code number 519G and under development for several years - are safer, more reliable and will replace the older vehicles in Uber's fleet "soon," according to Eric Meyhofer, the head of Uber's Advanced Technologies Group.

"This is about going to production," Meyhofer said in an interview at an Uber conference in Washington on Tuesday.

The new vehicle also has several backup systems for both steering and braking functions as well as backup battery power and new cybersecurity systems.

Uber is not ready to deploy vehicles without human controls, Meyhofer said.

"We're still in a real hybrid state," he said. "We have to get there and we're not going to get to thousands of cars in a city overnight. It's going to be a slower introduction."

The new XC90 vehicles have an interior fish-eye camera to scan for lost items, Uber said. They also do not have sunroofs since the self-driving vehicles have large sensors on the roof and are equipped with auto-close doors to prevent an unsafe departure.

Uber, which has taken delivery of about a dozen prototypes of the new vehicle, but has not yet deployed them on public roads, said the car's "self-driving system will one day allow for safe, reliable autonomous ridesharing without the need" for a safety driver.

Asked if Uber will deploy self-driving cars without safety drivers in limited areas in the next few years, Meyhofer said: "Yes - way before that."

But he added that Uber wants to be in "the good graces of public trust and regulatory trust" before making the business decision to deploy.

In December, Uber resumed limited self-driving car testing on public roads in Pittsburgh, nine months after it suspended the program following a deadly accident in Arizona.

In March 2018, authorities in Arizona suspended Uber's ability to test its self-driving cars after one of its XC90 cars hit and killed a woman crossing the street at night in the Phoenix suburb of Tempe, then Uber's largest testing hub. The crash was the first death attributed to a self-driving vehicle.

In March 2019, prosecutors in Arizona said the company was not criminally liable in the crash and would not pursue charges. Uber has since ended testing in Arizona, but plans to eventually resume testing in Toronto and San Francisco, Meyhofer said.

The death prompted significant safety concerns about the nascent self-driving car industry, which is racing to get vehicles into commercial use.

Volvo Cars Chief Executive Hakan Samuelsson said in a statement that "by the middle of the next decade, we expect one-third of all cars we sell to be fully autonomous."

Volvo Cars, which is owned by China's Geely Automobile Holdings Ltd, will use a similar autonomous base vehicle concept for the introduction of its first commercially available autonomous drive technology in the early 2020s.

Volvo and Uber said in 2017 that the rideshare company planned to buy up to 24,000 self-driving cars from Volvo from 2019 to 2021 using the self-driving system developed by Uber's Advanced Technologies Group.

An Uber spokeswoman said on Tuesday that the company plans "to work with Volvo on tens of thousands of vehicles in the future."