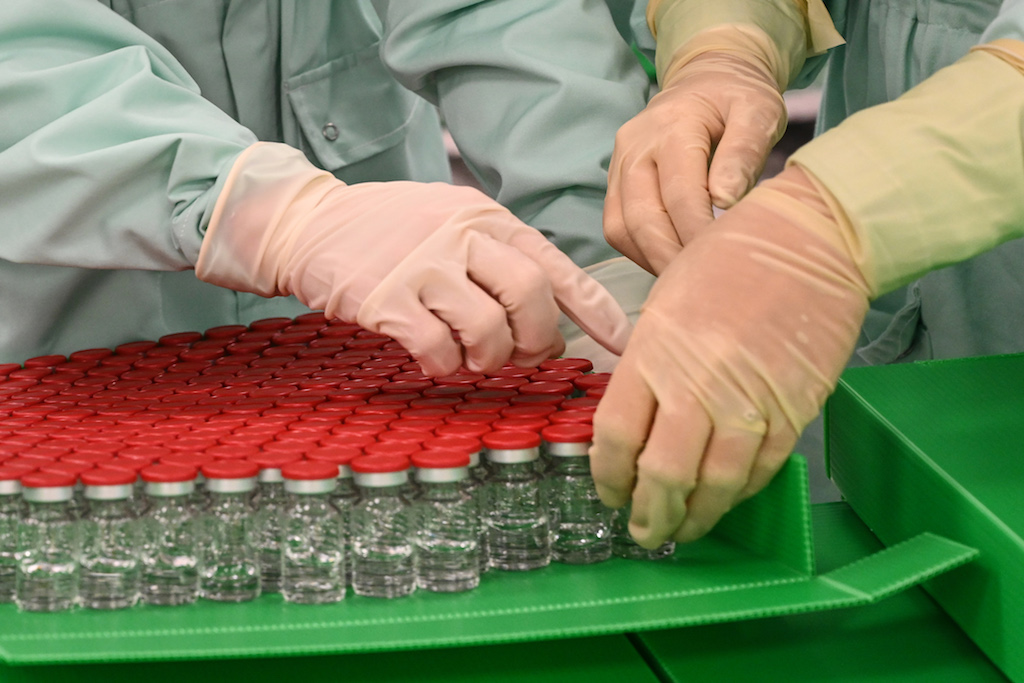 Laboratory technicians handle capped vials as part of filling and packaging tests for the large-scale production and supply of the University of Oxford’s COVID-19 vaccine candidate. Vincenzo Pinto / AFP

NEW YORK - Most stock markets in the US and Europe ended the week on an upbeat note Friday as coronavirus vaccine hopes outweighed worries over spiking infections in Europe and the United States, dealers said.

Asian bourses, however, took a hit as traders feared that another wave of Covid-19 lockdown measures will throw a shaky economic recovery off course.

In New York, the Dow index ended up 1.4 percent while the S&P 500 finished at a record high after making its own 1.4 percent gain. Most European markets also closed slightly higher.

London bucked the trend with the FTSE 100 index down by 0.4 percent on the back of a stronger pound, which hits share prices of multinational companies that earn their vast sums in US dollars.

That development "has raised speculation that the balance has tilted a little towards... a deal (rather) than no deal," said Fawad Razaqzada, market analyst with ThinkMarkets.

Despite the worrying trajectory of coronavirus infections in key economies, analysts say traders are taking heart from steady progress towards finding a vaccine.

US pharma giant Pfizer and Germany's BioNTech on Monday revealed that their candidate for a Covid-19 vaccine had been 90 percent effective.

Other companies working on vaccines also were believed to be close to announcing good news as well.

"The pandemic might not have the same negative impact on equities that it used to, seeing as there has been great progress made with respect to the drug that Pfizer and BioNTech are developing," said CMC Markets analyst David Madden.

But Oanda analyst Edward Moya noted that as the week wore on, investors nonetheless reduced "bullish bets, as virus lockdown efforts will likely remain in place throughout the holidays."

Meanwhile, markets in Hong Kong and Shanghai were hit by news that US President Donald Trump had signed an order banning investments in Chinese firms that could help the country's military and security apparatus.

The executive order, which takes effect on January 11, said Beijing obliges private firms to support these activities and through capital markets "exploits United States investors to finance the development and modernization of its military."