Zimbabwe will no longer accept foreign currency. The government today announced only Zimbabwean dollars will be valid for local transactions. Courtesy #DStv403

HARARE - Zimbabwe declared its interim currency to be the country's sole legal tender on Monday in a bid to stem black market demand for foreign currencies.

The RTGS (Real Time Gross Settlement) dollar was introduced in February as a first step towards a new currency by year's end, a key part of President Emmerson Mnangagwa's plan to stabilise an economy racked by inflation and widespread shortages.

"The British pound, United States dollar, South African rand Botswana pula and any other foreign currency whatsoever shall no longer be legal tender alongside the Zimbabwe dollar in any transactions in Zimbabwe," a government notice published on Monday said.

Zimbabwe adopted the US dollar as its official currency in 2009, when most Zimbabweans had already ditched the hyperinflation-wrecked Zimbabwe Dollar.

However the latest iteration of the domestic currency, the RTGS, has struggled to gain trust among large firms and ordinary Zimbabweans. Economic analysts fear 2009 may be repeating itself with the interim currency.

"They (government) are hoping that this will force generators of forex to sell their forex to make domestic transactions and thus create liquidity in the interbank market," said a bank executive in capital Harare who declined to be named.

"It might work if they can support the market with a large injection of liquidity to complement this. If they can’t, well then people will just hold onto their forex even more tightly than before," the banker said.

On the official interbank rate, the RTGS currency was pegged at 6.2 but on Monday it was trading between 11 and 12 against the dollar on the unofficial market.

Many Zimbabweans complain that goods and services are still priced in other currencies. While more than 80% of Zimbabweans earn RTGS dollars, goods ranging from bricks to rentals, car parts and many groceries have their prices pegged in US dollars.

Inflation has climbed to a decade high 97.86%, eroding salaries and savings and causing Zimbabweans to fear a return to the hyperinflation of 2008 when the rate reached 500 billion percent.

END_OF_DOCUMENT_TOKEN_TO_BE_REPLACED

Cosatu: ANC must deal with Magashule 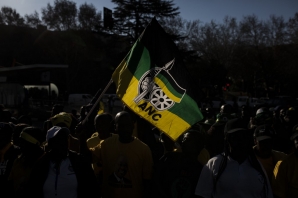