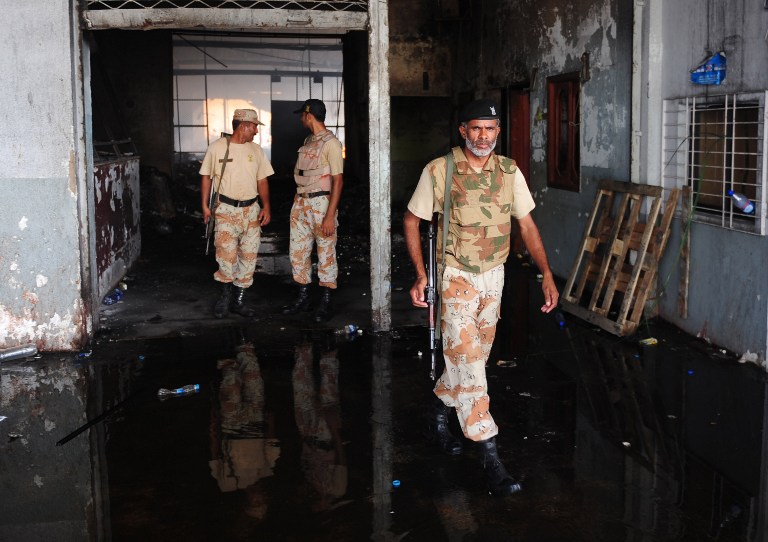 Pakistani Rangers in the fire-damaged premises of a cold-storage cargo facility at the Jinnah International Airport in Karachi where the charred bodies of seven airport workers who phoned their families as they hid in a cold-storage were recovered.

KARACHI - The charred bodies of seven Karachi airport workers who phoned their families as they hid in a cold-storage facility that was engulfed in flames during a brazen Taliban attack were recovered by Pakistani authorities Tuesday.

The deaths of the workers bring the toll from Monday&39;s all-night siege to 37. The victims&39; families had staged a protest on a main road in Karachi on Monday night demanding authorities find their relatives, saying they had been in contact via telephone during the attack.

The assault has all but extinguished a nascent peace process and raised questions about how the Taliban were able to penetrate the airport serving Pakistan&39;s economic hub.

The cold-storage facilities, which are normally kept at freezing point and are used to keep food, had lost power at the time of the attack, he said.

The facilities were adjacent to a hajj terminal for flights to Mecca which was one of the entry points used by the militants and caught fire during the assault.

Eleven airport security guards are confirmed dead, along with a paramilitary ranger and a policeman, 14 civilian workers and 10 militants.

It is now the biggest Taliban attack since two suicide bombers blew themselves up at a church in northwestern Peshawar last year killed 82 people, mainly Christians.

The attack took place just three kilometres from the Mehran naval base, which the Taliban laid siege to three years ago, destroying two US-made Orion aircraft and killing 10 personnel in a 17-hour operation.

The group also carried out a raid on Pakistan&39;s military headquarters in the garrison city of Rawalpindi in 2009, leaving 23 dead including 11 troops and three hostages.