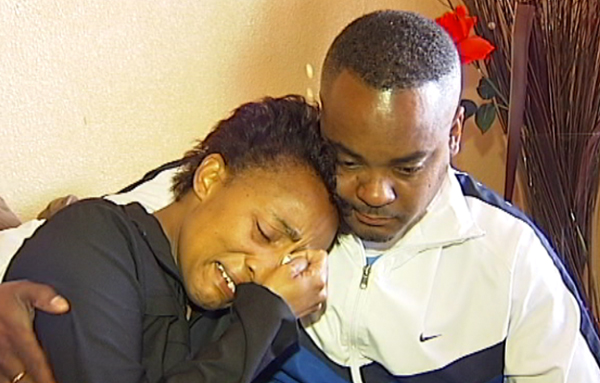 Reiger Park, Boksburg - The family of four-year old Taegrin Morris, killed during a carjacking this weekend, have today attended an identity parade in Brakpan.

JOHANNESBURG – Two recent violent hijackings in which children were snatched have triggered anger, fear and trauma in South Africans, who are battling to deal with the aftermath.

For six-year-old Mongezi Phike who spent five days in the care of the men who hijacked and severely beat up his father, the outcome was a happy one when he was reunited with his mother in the early hours of Monday morning.

But four-year-old Taegrin Morris - whose foot caught in a seatbelt when hijackers stole his mother’s VW Golf at gunpoint - ended up being dragged to his death in Reiger Park.

His desperate mother, Chantel Morris, pleaded with the robbers: “Take everything but let me take my child” as Taegrin called out “Mummy, mummy please help me”.

The gang of three ignored the pleas and fled in the car which was later found abandoned with Taegrin’s body still attached to the belt.

The two scenarios have sparked emotional reactions from South Africans, while the angry community in Reiger Park has called for the suspects to be handed over to them for street justice to be meted out.

Parents on social media have reacted to the nightmare events.

“Sad state of a society when your four year old comes home from school and explains to you how to unclip a seatbelt, listen to your mommy and get out of the car quickly. Not cool South Africa!” said one mother.

These reactions are normal and understandable said Dr Johan Burger of the Institute for Security Studies.

“It’s sort of a psychosis that happens. It’s almost natural because of high levels of violent crime in South Africa if you look at carjackings in general. If you put it in the context of a single incident, it doesn’t make sense. But when you have two cases close together and see it in context of general high level of violent crime, it becomes a more understandable or reasonable reaction,” Burger said.

“(The hijacking of a car with a child inside) is a rare phenomenon, but having two in succession, combined with a gruesome death, the average decent person will react emotionally. People will try to imagine being the mother in this incident, and feel absolute unimagineable helplessness,” he explained, showing why the savage reactions of Reiger Park residents were understandable.

Burger described this as “a huge drop”, especially as other violent crime continued to increase. But last year saw a spike in carjackings – up to 9,990 in the last year, indicating that the crime is once again increasing.

A more healthy reaction to the reports, Burger said, was for people to read safety tips, consider how they would react in an imagined scenario, and to teach their children how to unbuckle quickly and get out of the car in an emergency situation.

“Hijackers are nervous and worried about someone interrupting them, about getting caught, or injured or killed. If the victim is also nervous, there is an increased chance of something going wrong. But if you know to be extremely cautious and act slowly and show no threat to a hijacker, and don’t aggravate the situation – you reduce the chances of things going wrong,” he said.

Valdi Van Reenen-Le Roux, Executive Director of the Trauma Centre for Survivors of Violence and Torture in Cape Town, said that South Africans living in and being exposed to constant high levels of crime and violence tend to experience continuous traumatic stress.

“The reaction of some Reiger Park residents in the wake of four old Taegrin Morris’ horrific death may very well be linked to trauma triggers linked to their own past and present traumas. One typical response to trauma is that of fight or flight. Just as an individual or family responds to trauma, a community may respond in similar ways,” she explained.

Anger, aggressive behaviour, blame and fear were typical responses to trauma, and outrage may be a normal reaction to a heinous crime. However, choosing street justice to fight turned victims into perpetrators in conflict with the criminal justice system.

She said the answer lay in a victim-centred approach in which victims were offered remedy and reparation.

“Satisfaction that the crime is receiving priority by the criminal justice system is a fundamental need of survivors. Knowing that mechanisms to guarantee non-repetition are in place helps survivors to come to terms with the unjustifiable loss of a loved one. Similarly, compensation for the loss cannot be realised if the perpetrator is not apprehended and found guilty in a court of law,” said Van Reenen-Le Roux, explaining why victims needed to believe that justice would take place in order to come to terms with their trauma.

* Police on Tuesday doubled the reward offered for information that would lead to the arrest of Morris&39;s killers.

"We are confident that we will be making an arrest pretty soon," Kweza said.

She appealed to the public not to take the law into their own hands and co-operate with police in their investigation.