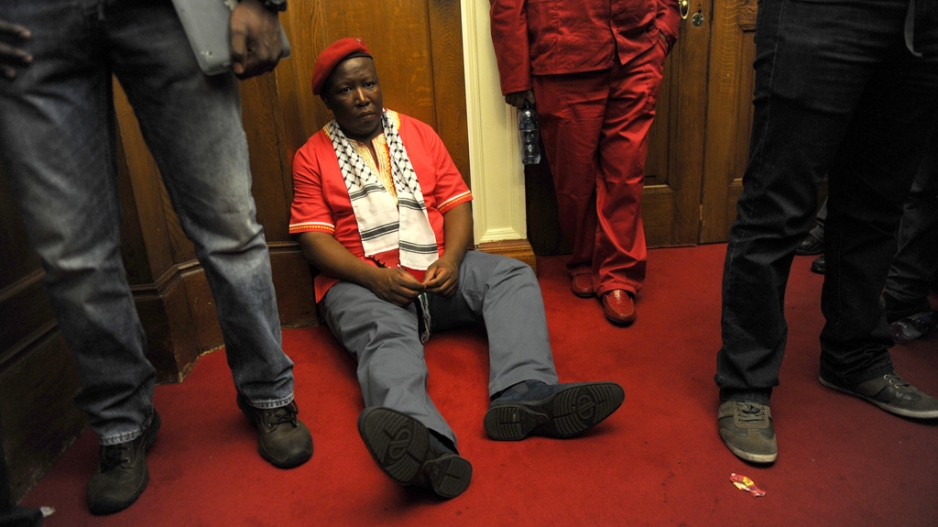 Economic Freedom Fighters leader Julius Malema sits on the floor after he was prevented from gaining access into the House at the Gauteng Legislature in Johannesburg on Tuesday, 22 July 2014.

In an interview with eNCA, Malema claimed that the police used live ammunition on EFF supporters outside the Gauteng Legislature in Marshalltown on Tuesday.

The SAPS resorted to firing upon the protesters with rubber bullets and stun grenades as the crowd allegedly became uncontrollable.

“Stun grenades were fired when the crowed got out of control,” said Dlamini.

Police are monitoring the CBD as reports claim EFF protesters are looting stores in the area.

Dlamini claimed only a few police were injured and no arrests have been made.

EFF members have been protesting against the removal of their MPLs for wearing red overalls during a sitting on July 1.

EFFMarch:scores of EFF members shot by police @the Gauteng legislature

As they plot their slaughtering of us weaponless CITIZENS. Of course it is an Afrikaaner police leading. pic.twitter.com/ZlrP5SbRvJ

EFFmarch .Damages must be costed and presented as a bill to EFF . Disgraceful unruly behavior makes a mockery of the institution (GP leg)

EFFGPMarch:why do u have to shoot at our members without any provocation?we are here to make a statement ,we are not going anywhere

Bloody thugs! RT @LeighMathys: The police have just Manhandled me and pulled me away from our Fighters pic.twitter.com/Yi8BIyIj3z