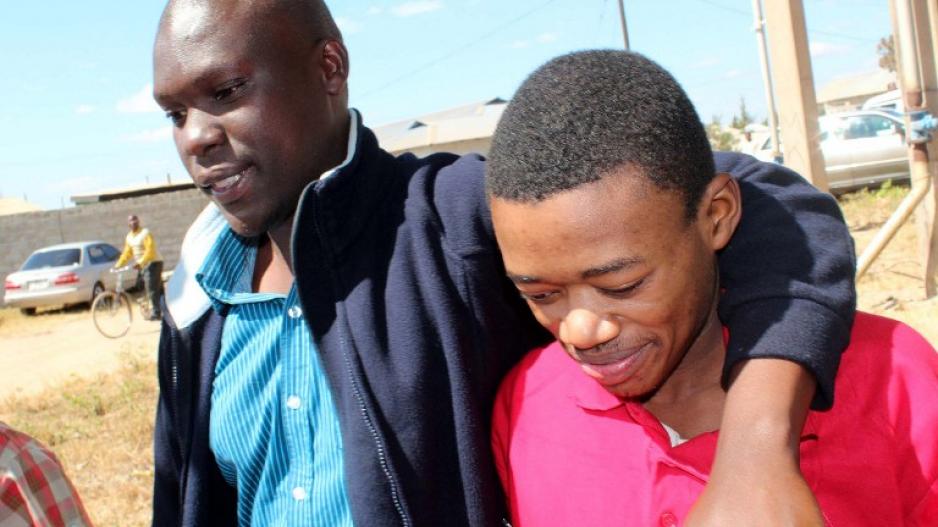 Accused of having relations "against the order of nature" James Mwape (R) is comforted by his relative after he was acquitted by the Kapiri Mposhi magistrate court on July 3, 2014.

KAPIRI MPOSHI - Two Zambian men charged with having consensual gay sex have been acquitted after magistrates said the state failed to provide sufficient evidence in the high-profile case.

Philip Mubiana and James Mwape, both in their early 20s, had been held since May last year and faced 15 years or more in jail for having sexual relations "against the order of nature".

The pair&39;s lawyer William Ngwira said it was a "welcome" ruling, but added: "We are only sad that our clients have been in detention for over a year."

The case had drawn the attention of rights groups and foreign governments, concerned that Zambia may be toughening its stance on gay rights following stricter new laws in Uganda and elsewhere in Africa.

In February, another Zambian magistrate acquitted top gay rights activist Paul Kasonkomona on charges of encouraging homosexuality after concluding that the prosecution failed to prove its case.

"The case should send a message to police, prosecutors and communities that it is not acceptable to witch-hunt people," said Anneke Meerkotter, a lawyer at the Southern Africa Litigation Centre.

"Actions driven by stigma and prejudice can cause immense suffering, not just of the people who were arrested, but also of their families."

Zambia&39;s tough anti-homosexuality laws date back to the British colonial era and public opinion remains strongly against gays and lesbians.

Mubiana and Mwape were arrested in 2013 after being reported to the police by one of Mubiana&39;s relatives.

As he left the court a free man, Mubiana said "I now want to go and study law."

But his grandmother, who was in court, said she was disappointed with the verdict.

Outside the court in Kapiri Mposhi, the small town 200 kilometres north of Lusaka where the trial took place, residents denounced Western governments for their support of the couple.

"Give us economic aid and not this rubbish. This is a Christian nation and we shall not allow same sex marriages. If you don&39;t want to help us go back" local politician Kelvin Mukuka shouted at a European diplomat.