Earthquake claims at least one life 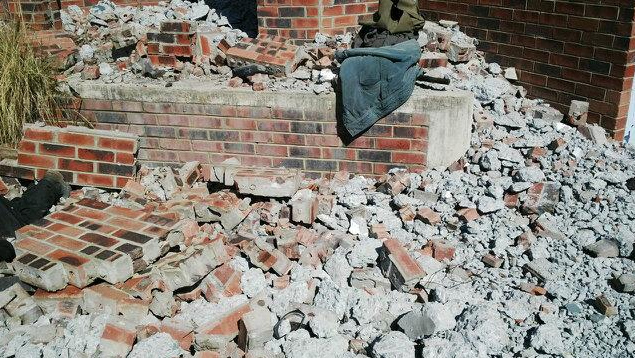 ER24Carltonville posted this picture to Twitter showing a collapsed wall near Okney, in the North West. On 5 August 2014 an earth tremor measuring 5.3 on the Richter scale is said to have originated in the area. [@ER24Ctonville]

ORKNEY - ER24 emergency personnel services in Carletonville have so far confirmed one fatality as a result of today&39;s earthquake.

ER24 spokesperson Luyanda Majija said a man reportedly died when the wall of a dilapidated building in the old Orkney mining area collapsed on him.

"A 31-year-old man was found deceased in an old mining village in Orkney, in the North West."

Emergency workers were at the mining village, searching for mineworkers presumed to be trapped in 11 shafts.

Majija could not immediately confirm the name of the mine.

A magnitude 5.3 eathquake struck the mining town of Orkney in the North West at approximately 12h25 on Tuesday, 10km deep at its epicentre.

Tremors were felt countrywide, in Botswana and Swaziland, and as far afield as Mozambique.

According to the US Geological Society, of all earthquakes measured in the past 24 hours, South Africa&39;s measures the highest.

The Orkney Emergency Medical Services (EMS) department says it is checking buildings in the area for structural damage following the earthquake.

EMS spokesperson in Orkney, Tommy Deysel, has reported however, that the situation in the area is under control.

Speaking to eNCA, Deysel has encouraged any people who need help to “come straight to the fire department.”

Deysel added that the fire department building has “some minor damage”, but is structurally sound.

He said the town has requested assistance from provincial traffic and housing authorities to help in Orkney.

Deysel added that the Potchefstroom municipality has also been asked for assistance.

The EMS department would also be in contact with mines in the area to confirm whether any workers have been affected underground, Deysel said.

The Sapa newswire service reported that some mineworkers were trapped underground in Orkney, but eNCA could not immediately confirm this.

Deysel encouraged Orkney residents to contact him direction on his cellphone on 082 803 5213.