Ebola victim on the run in Sierra Leone 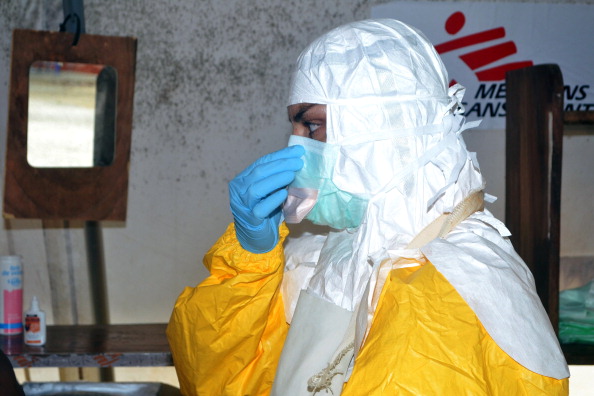 A member of Doctors Without Borders (MSF) puts on protective gear at the isolation ward of a Freetown hospital. The first known resident in the capital with Ebola is on the run.

FREETOWN - Sierra Leone officials appealed for help on Friday to trace the first known resident in the capital with Ebola whose family forcibly removed her from a Freetown hospital after testing positive for the deadly disease.

Radio stations in Freetown, a city of around one million inhabitants, broadcast the appeal on Friday to locate a woman who tested positive for the disease that has killed 660 people across Guinea, Liberia and Sierra Leone since an outbreak was first identified in February.

"She is a positive case and her being out there is a risk to all. We need the public to help us locate her."

Koroma, a resident of the densely populated Wellington neighbourhood, had been admitted to an isolation ward while blood samples were tested for the virus, Health ministry spokesman Sidi Yahya Tunis.

The results came back on Thursday.

"The family of the patient stormed the hospital and forcefully removed her and took her away," Tunis said. "We are searching for her."

Fighting one of the world&39;s deadliest diseases is straining the region&39;s weak health systems, while a lack of information and suspicion of medical staff has led many to shun treatment.

Meanwhile, more than 1,000 cases and over 700 deaths have been reported in Guinea, Sierra Leone and Liberia since the outbreak of Ebola earlier this year.

The World Health Organisation (WHO) is concerned that the disease will continue to spread due to a lack of resources as the hospitals in these countries don&39;t have enough equipment and drugs.

Health workers are ill equipped and many have contracted the disease. In Sierra Leone eight nurses and the doctor leading the fight against the disease have been infected.

"So this is an emergency, we are already in trouble, we are already fighting something that is very, very large, it is gone get a lot larger if we do not get a lot more resources," Chris Lane, World Health Organisation Epidemiologist said.

Experts say Ebola is difficult to fight because of stigma attached to the disease particularly in remote areas. Relatives and friends hide patients because they believe hospitalisation is a "death sentence".

Religious leaders in Sierra Leone blame this on lack of information and are urging the government to address these issues.