EFF kicked out of Gauteng Legislature 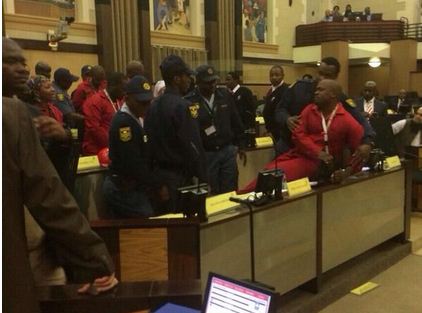 Police were called in to remove EFF MPLs from the Gauteng legislature on Tuesday.

JOHANNESBURG - Members of the Economic Freedom Fighters party were kicked out of the Gauteng provincial legislature on Tuesday because of their red overalls.

Police were called in to remove them following an order by the presiding officer.

An altercation broke out between the EFF members and SAPS after Gauteng speaker Ntombi Mekgwe ordered them to be forcibly removed from the legislature.

Mekgwe ruled that the seven members dressed in red overalls leave the House as their attire was inappropriate.

She found their red overalls inappropriate because they had the word &39;Asijiki&39; (We are not turning back) printed on them.

The party claimed that police assaulted two of their members.

"Our leader Benjamin Disolwane was manhandled and handcuffed incorrectly by the police. As a result he was injured and is waiting for the ambulance," said EFF Gauteng spokeswoman Omphile Maotwe.

Another member Mgcini Faku was taken to a doctor for "urgent" medical attention.

Gauteng police spokesman Lt-Col Lungelo Dlamini said he would respond to the allegations only once a case had been opened.

If the EFF doesnt disengage on this redness, they will not be part of any lawmaking process in SA. They will forever be kicked out...

Mxim, why did the ANC Gauteng try to make EFF change their red what whats, they know that wont happen. allow them to be stupid

After being bounced from the House, EFF members & supporters picketing outside the Legislature

“@EconFreedomZA:Police forcefully remove EFF MPLs, why - because they are dressed like workers. Really? pic.twitter.com/4RCO628MrP” EFF grow up!