EFF - Pay back the money 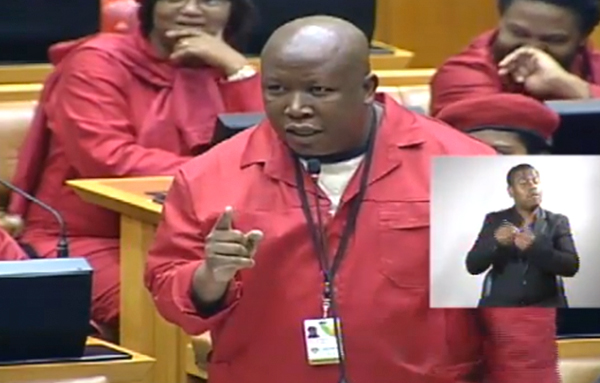 Parliament - EFF Leader Julius Malema refused to leave Parliament on Thursday before getting an exact date when President Zuma will pay back the money used for his Nkandla home.

* The uproar begins at about 40 minutes into the 53 minutes in the recorded proceedings above.
CAPE TOWN - Members of the Economic Freedom Fighters disrupted proceedings in the National Assembly on Thursday while President Jacob Zuma was answering questions.
EFF leader Julius Malema was not happy with how Zuma answered questions regarding the security upgrades at his Nkandla residence. He felt there was no clear directive on when he was going to pay back part of the money spent on R246 million security upgrades.
It initially started when Malema was not given permission to ask a subsequent question related to Question 3 as laid out in the question paper that had to do with the president’s response to the Public Protector’s report on the Nkandla upgrades.
Malema felt that the president’s response was not adequate and demanded an answer before he sat down. From here other members of the EFF stood up requesting further that the president adequately answer the question.
Their words became clear - “When are you paying back the money?”
Speaker Mbete soon thereafter requested that the disruptive members be removed from the gallery.
In response, EFF chief whip Floyd Shivambu shouted at Mbete, "You will not remove us."
Failing this, the sitting went into recess and the audio from the live parliament feed was turned off.
Viewers could see Parliament security attempting to turn off the visuals while members of the EFF could still be seen in their red overalls chanting &39;pay back the money&39;.