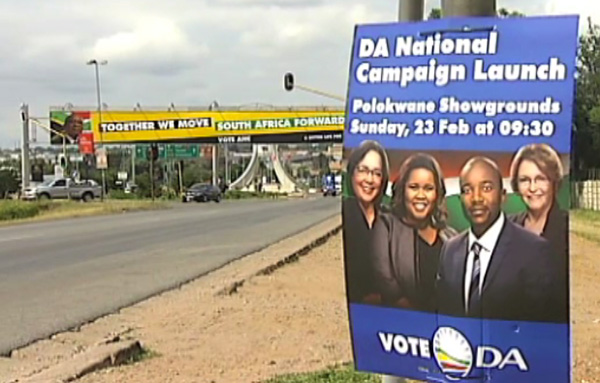 POLOKWANE - The Democratic Alliance says its manifesto launch in Polokwane on Sunday, is in line with its aim of reducing the ANC&39;s majority and winning at least three provinces.

The party expects up to 24,000 supporters to descend on the Polokwane showground, as it plans to reduce the ANC&39;s majority in Limpopo, to below 80%.

Limpopo has become a battle ground for the David vs Goliath electoral battle between the ANC and the DA.

But while the clash will be staged in Polokwane, it’ll be won and lost in the hearts and minds of voters across the province.

The DA speaks of the need to bridge the gap between economic insiders and outsiders. Impoverished communities like Matebeleng village, just outside Polokwane, perhaps personify the outsiders the party speaks of.

The challenge for the DA is to sell its message to communities like this one, across the country, something the it appears to understand.

The party has supplied solar powered lights to this village, just one of the ways it&39;s tried to woo voters like Moses Mamashila.

"We had not talked to the DA before. We only started engaging with the DA a few months ago," said Matebeleng resident Moses Mamashila.

"All along we&39;ve been with the ANC, and the ANC has been promising us electricity, houses and everything, but nothing has come of those promises."

This province&39;s shambolic administration over the past five years, is just the kind of broken governance system the DA says, has come to characterise the ANC.

"We intend to make sure that the ANC in Limpopo province gets pushed well below 80% and this whole election campaign here in Polokwane fits very nicely in with our national campaign in order to reach those targets on a national level," commented DA Limpopo leader Jacques Smalle.

The DA says its Limpopo support base has been swelling steadily since 2009 and it&39;s buoyed by recent victories, including those in predominantly black rural wards.

Just how far the blue wave will sweep in this province, though, remains to be seen.