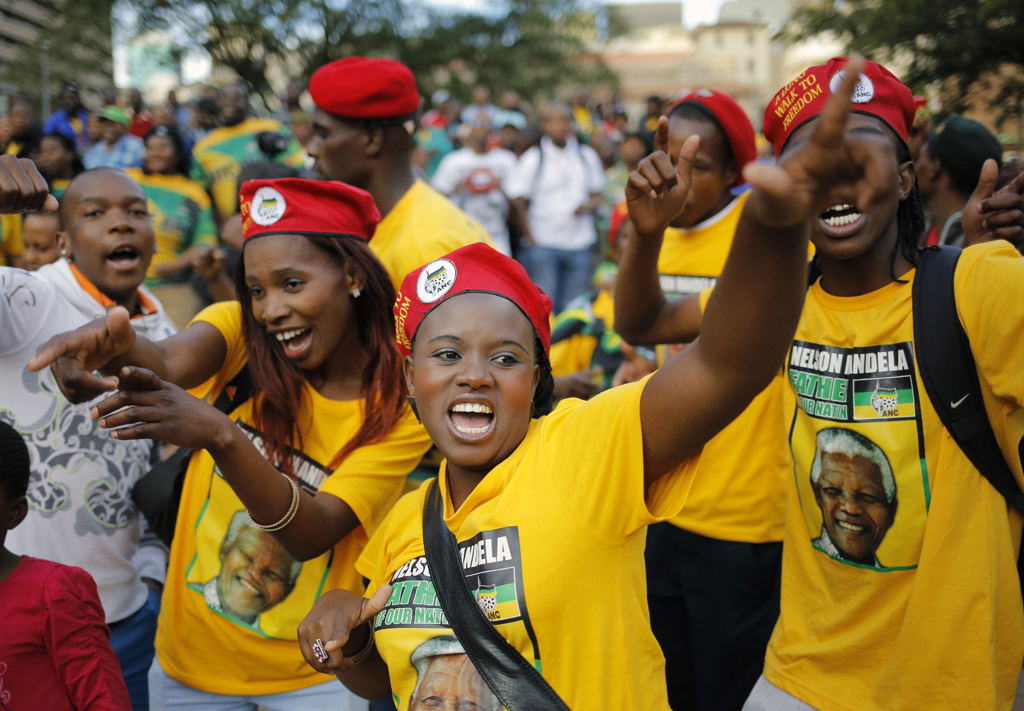 Some of the thousands of African National Congress (ANC) supporters celebrate their party winning the elections and gaining another five years in power, in Johannesburg, 10 May 2014.

JOHANNESBURG - The ANC&39;s majority shrank to 62.1 percent as won its sixth term in power this week, while the Democratic Alliance grew its vote share significantly to 22.2 percent, the Electoral Commission of SA (IEC) confirmed on Saturday.

Founded eight months ago, the far-left Economic Freedom Fighters came third in Wednesday&39;s elections with 6.3 percent after a campaign fought on promises to redistribute resources to the poor.

The ANC will hold 249 seats in Parliament -- 15 less than in the first term of the Zuma administration -- while the DA and EFF will respectively fill 89 and 25 seats in the legislature.

Declaring "the people are never wrong", President Jacob Zuma said the victory confirmed South Africans&39; deep loyalty to the former liberation movement and dedicated it to the memory of Nelson Mandela, who took the oath as the country&39;s first democratic president 20 years ago to the day.

"We dedicate our victory to Madiba&39;s memory, and pledge to continue taking forward his legacy," Zuma said in an acceptance speech at the result centre in Pretoria.

"This election victory has re-confirmed just how deeply rooted the ANC is in the hearts and minds of the overwhelming majority of South Africans. Let me express our profound gratitude to the more than 11 million people who voted for the ANC.

"It is strong sign of approval of the good work we have in the past 20 years in general and the last five years in particular in building a better life for all."

Zuma said his government would use the mandate to speed up service delivery and infrastructure development.

He also pledged to implement the National Development Plan, possibly suggesting he will pay less heed to the ANC&39;s leftist allies in his second term.

The president also thanked strife-torn communities, singling out those in Marikana, Bekkersdal and Springs, for voting peacefully and promised that the new government would give attention to their plight.

"No community in our country should live in a state of turmoil. The issues they have raised will be addressed by the new government."

Reading provincial results, IEC chairwoman Pansy Tlakula confirmed that the gap between the two main parties had narrowed in Gauteng with the DA securing 23 seats to the ANC&39;s 40.

Though the ANC maintained its outright majority, it shed more than 10 percentage points to finish at 53 percent, while the DA&39;s support grew by 40 percent.

Political analyst Aubrey Matshiqi commented that this development was a "tectonic shift" and showed that the province had become a key battle ground in South African politics, though the country remained in democracy, as it was under apartheid, one of dominance by a single party.

"In future elections, starting with this one Gauteng is going to be a highly contested place."

ANC supporters had earlier cheered and booed while watching the announcement of the final general election results on a big screen.

They ululated as the results were announced, but there was booing when the results of Julius Malema&39;s Economic Freedom Fighters were shown, followed by screams of "ANC!, ANC!".

They had braved chilly weather to attend the celebrations in the CBD and listened attentively to Zuma on the big screen.

Beforehand, thousands of party goers were singing and dancing, with fists and posters held aloft as musicians entertained the crowd. Some supporters climbed on top of walls to get a better view of the stage and two big screens on either side. Young children could be seen on their parents&39; shoulders as the festivities continued.

EFF leader Julius Malema said the ANC was putting a brave face on finding itself "reduced", particularly in Gauteng, and promised to select its MPs from the poorest of the poor.

"The material conditions on the ground [have] dictated we take such people to government...," he said.

Earlier in the day, DA leader Helen Zille said in Cape Town that she believed her party&39;s decision to focus much of its campaign efforts and resources on Gauteng had been vindicated.

"It was a completely worthwhile investment and we had a fantastic return on that investment."

Zille said she was thrilled that, according to the party&39;s calculations, it had secured the votes of 700,000 new black supporters.

"People used to say we are party of minorities. Well we got more than one million new votes and 700,000 of those votes are from black South Africans who have never voted for the DA before. We have broken the ceiling."

The DA widened its outright majority in the Western Cape to 59 percent, which will give it 26 seats in the provincial legislature compared to the ANC&39;s 14.

In total, 13 parties won seats in Parliament, with the IFP winning 10 and the Agang finally securing two after a fraught election effort marred by its failed merger with the DA.

IEC deputy chairman Terry Tselane thanked the 18.4 million South Africans who cast their ballots -- a turnout of 73.4 percent -- and said the election had been "the most efficient of all elections in our country&39;s short history".

He said voters waited on average for 16 minutes in the queues before voting.

Blade Nzimande: Those who say a party that got 6% got a lot of votes are practicing false mathematics @eNCAnews sinqobile

Zuma: What an overwhelming victory for the ANC. This campaign has seen many political parties bowing out of Parliament @eNCAnews

Zuma: Almost the whole of this 4th term there was a campaign against the ANC. Media put the ANC down as a failing organisation @eNCAnews

Zuma: The ANC introduced the fight against corruption in this country but this positive action was turned against us @eNCAnews

Zuma: The ANC prepared itself to address problems of the country not to respond to opposition or media @eNCAnews

Zuma: Some parties have no branches in provinces - they just have a mouth to talk negativity all the time @eNCAnews

Zuma: The overwhelming majority of this country says the ANC has delivered on its policies @eNCAnews

Zuma: Who can defeat us if we are with the people? Crowd responds "No one" @eNCAnews

Zuma: I said many times in Parliament be a constructive opposition, then people will listen to you but no one did @eNCAnews

Zuma: Because the opposition had nothing to say they spent more than a year talking about my homestead @eNCAnews

Zuma: When we campaigned door to door, our supporters didn&39;t have a problem with Nkandla, despite what the opposition said @eNCAnews