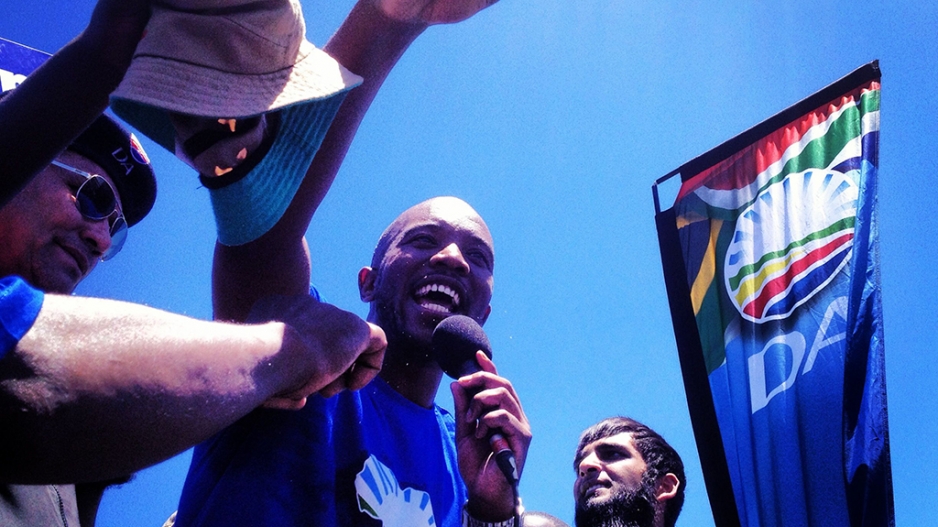 DA's Mmusi Maimane encouraging his party supporters after their Million Jobs march failed to deliver a memorandum to the ANC on Wednesday 12 February.

Mmusi Maimane may be one of the most hated figures in local politics.

His contemporaries think he is a sell out, his political foes regard him as a ‘yes man’ to the DA&39;s white woman (Helen Zille) and many among the rest of the black majority consider him sceptically.

Born in Krugersdorp 33 years ago on June 6, Maimane is one of the youngest leaders in South African politics today.

The official opposition party in Parliament, the Democratic Alliance, has Mmusi as its main man in the political struggle to control Gauteng. Maimane is the party’s premier candidate for the country’s richest province.

While he’s not campaigning for the DA, he is an active family man at home.

The Wits graduate is a father of two in a family of a black dad and a white mom in the surbub of Weltevreden Park, west of Johannesburg.

He sometimes takes his daughter, who is the eldest of the two offspring, to work when he can, to administer what could easily be perceived as political education.

“My kids must be engaged with issues that concern black South Africans. So I take my daughter, because she is able to now, on campaign trails. We go to informal settlements…I want her there. She must know, the world has multiple variants,” Maimane says.

The household orientated man who has been likened to the American president, Barack Obama, in his public speaking oratory style, emphasises the importance of being an insightful frame of reference to children.

“I want to model my kids to the new South Africa that we want to see, that they must be able to walk in any context and treat the human being as the human being. I teach my kids respect, not because it’s a black thing, but because it is a respect issue.”

When Maimane decided to marry his wife, Natalie, bringing her home meant a lot of work to defuse the inevitable cultural shock that comes with most cross cultural marriages.

He says however, his family was supportive in easing Natalie into the black family dynamics.

“We were at a funeral once. My wife and a cousin of mine stood in a line to get food after the processions. In the black culture, in events like funerals, all women have to be working either helping in the kitchen or anywhere there maybe a shortage of hands. My grandmother arrived to give both my cousin and my wife a tongue lashing, that they stood in the queue while everybody was working,” Mmusi remembers.

“That confirmed for me that they didn’t see her through the colour of her skin. But as a woman who is part of the family”

Mmusi Maimane will become Gauteng premier if the DA wins the most votes in the province after the May 7 polls.

*Watch a video of a frank interview with Maimane and footage, off the stage, in the gallery above.