Municipalities vs communities - why South Africans are angry 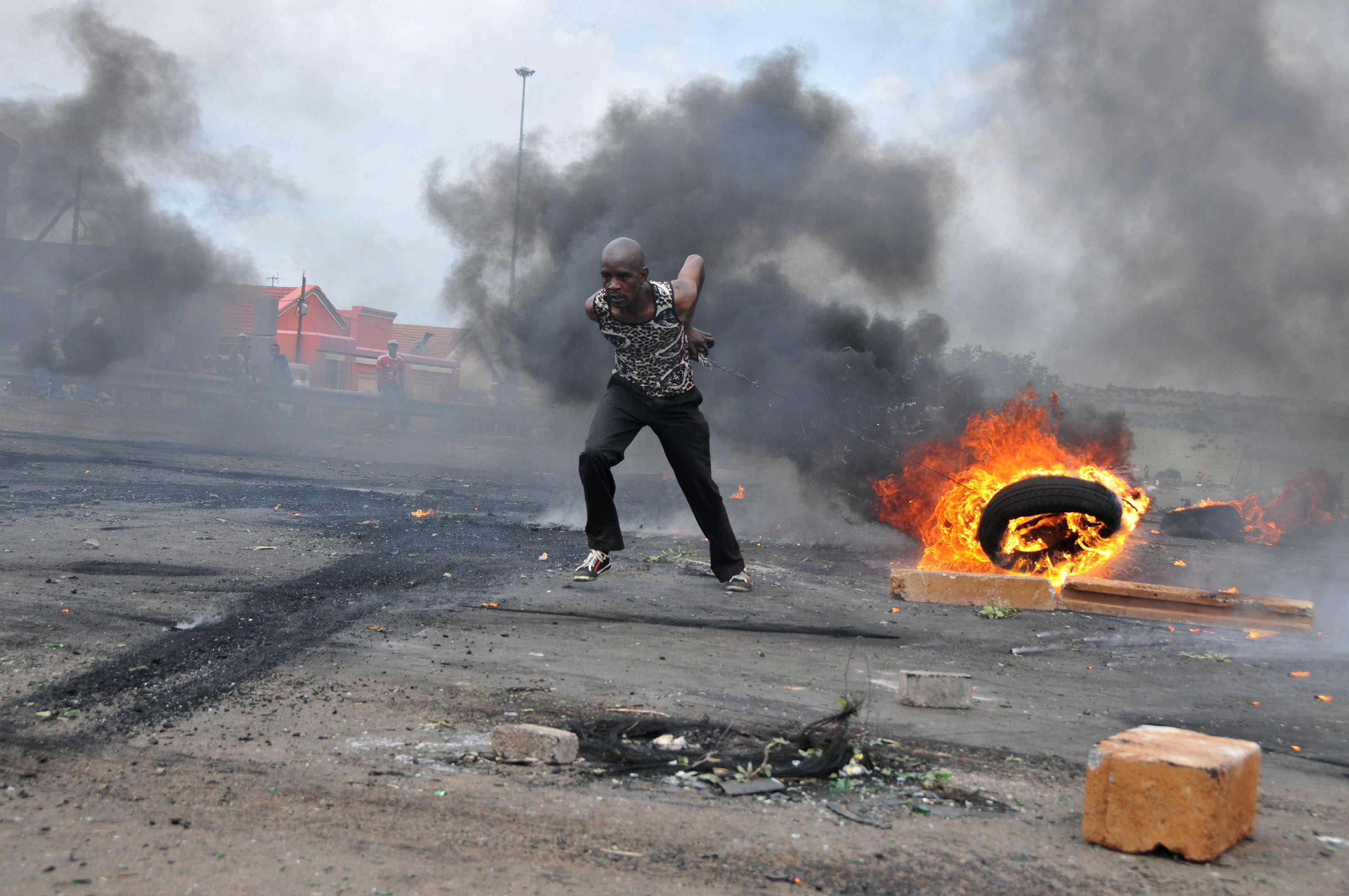 FILE: A protester pulls a burning tyre during a service delivery.

As South Africa celebrates 20 years of democracy, many communities countrywide are still without proper sanitation, access to water or a decent place to live. This has resulted in a rise in violent service delivery protests in recent years.

With the elections just weeks away – eNCA.com has gone back to some of the country’s most notorious hot spots. We asked if municipalities are battling to cope with a growing demand for services? Or are corruption, maladministration and a lack of skills in local government crippling service delivery?

On 13 February 2014 during his State of the Nation Address in Parliament, President Jacob Zuma laid the blame for a rise in service delivery protests on government success over the past 20 years.

“The dominant narrative in the case of the protests in South Africa has been to attribute them to alleged failures of government. However the protests are not simply the result of failures of government but also of the success in delivering basic services. When 95% of households have access to water, the 5% who still need to be provided for, feel they cannot wait a moment longer. Success is also the breeding ground of rising expectations,” said Zuma.

But on the ground, in hundreds of communities across South Africa, anger over services is resulting in violent protests. Topping the list of grievances is a lack of services, nepotism in municipalities and corruption.

Since 2012, thousands of residents of Sterkspruit, in the Eastern Cape, have taken their battle for running water and other basic services to the streets. They&39;ve also accused the Senqu Municipality of tender fraud and maladministration.

In March 2014, the Hawks arrested senior officials, including the municipal manager and the chief financial officer in that municipality, on charges of tender irregularities.

Over the past five years, a number of municipal officials have been arrested countrywide, for crimes ranging from financial mismanagement to tender fraud.

Last year, in his Municipal Audit Report, Auditor General Terence Nombebe painted a grim picture of the state of municipalities across the country.

As municipalities battle to keep their books in order, they’re also dealing with growing frustration among South Africans, but government says although there are challenges in some areas, there have been massive improvements in others.

“It is important that we also take a careful examination and acknowledging that since 1994 the integrated system of local government has delivered much serviced communities in the form of water, electricity, roads, local economic development and sporting facilities however many of our communities remain un-serviced and consciously true integrated development planning programme we are pushing the frontiers of delivery to make sure that those areas that were not  serviced indeed they get into the bandwagon of service delivery,” said South African Local Government Association (SALGA) CEO Xolile George.

He also added that “government success” could also be fuelling anger.

“So it is a number of areas where all it does to citizens, those that are serviced as new areas they become the ray of hope for those who are waiting, those who are waiting to say that we have registered for RDP housing we have indicated during the last IDP session that we need water and roads – when is it coming? So a toxic combination of these factors brings a lot of agitation to some of the citizens,” he said.

Hundreds of frustrated communities have now sought the intervention of Public Protector Thuli Madonsela. She’s had to investigate dozens of municipalities following complaints by community members.

“I think it is disrespectful of people to say that they are complaining because there has been successes at least some of the communities we have been to – its communities that are still without water not because the municipality is poor and therefore there is no water because there was an IDP that was done and then when it comes to implementation somebody changes the priorities and that’s sometimes where corruption comes in – where the plan is we are going to,” said Madonsela.

Whichever way the debate goes, in towns like Ermelo in Mpumalanga, residents are angry. They&39;ve been protesting against poor service delivery for years, claiming their pleas have fallen on deaf ears.

“I live in a squatter camp since 2006. We have no electricity, water we fetch from far, we don’t have toilets. They have been saying they will fix toilets and roads but they haven’t. Even the houses, we have been registering but nothing has happened,” said Ntomowa Nkabinde, Ermelo resident.

They have also accused their municipality of corruption. It&39;s a story all too familiar with the residents of Bekkersdal in Gauteng, who went on the rampage in 2013 over service delivery, accusing municipal officials of corruption.

In the last five years, nearly 40 municipalities have been placed under administration.

Is there a crisis in local government? Are communities losing faith in municipalities?

“There is common perception in the public discourse that local government as a whole is one big unmitigated disaster area which I think is far from the truth – there are many municipalities that do excellent work that I think are shining examples of good governance and service delivery,” said Andries Nel, Deputy Minister Cooperative Governance and Traditional Affairs.

The deputy minister said South Africa’s past has resulted in many problems that are taking longer to resolve.

“The whole term of service delivery protests I think it is in many ways one that is not very helpful because if one looks at South African society we are a society that comes from a very divided past we have inherited terrible problems and we have done a lot over the past 20 years to solve those problems but many those problems are still with us. Problems of poverty, of inequality of unemployment and those things feed frustration and discontent,” he said.

It’s not all bad news though. In some areas, demonstrations have resulted in improvements in areas like Ficksburg in the Free State, where violent service delivery protests erupted in April 2011.

This is where Andries Tatane was shot and killed by police, when thousands of protesters from Meqheleng township took to the streets over water shortages and housing. Four years later, many residents are happy with the progress made.

“I used to have a shack and they built a house for me and the house was not properly built and it was demolished and this one was built and I even got a title deed,” said Sara Tlali.

The 72-year-old now has a house with running water.

Ficksburg now has a good story to tell but it came at a high price. With elections looming, citizens in Bekkersdal, Mothutlung, Khayelitsha and many other townships around the country, have the power to speak, through their votes on May 7th.