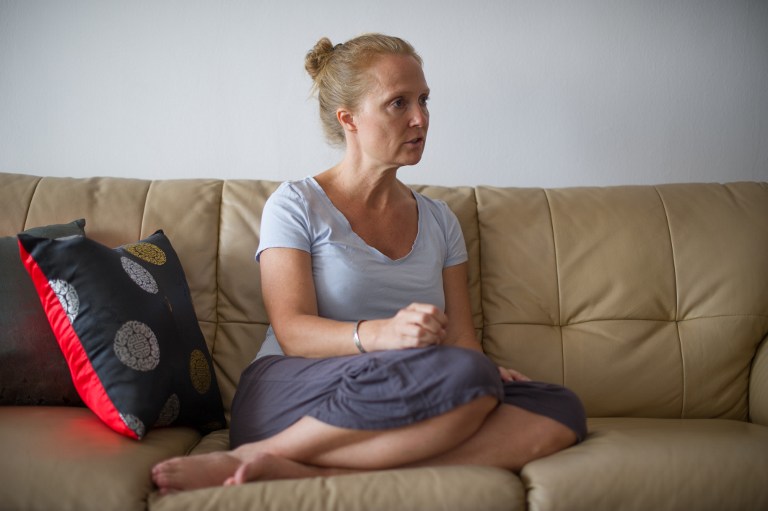 Sarah Bajc, an American, whose partner, Philip Wood, was on flight MH370, speaks to AFP in Kuala Lumpur on July 15, 2014. She is one of hundreds of relatives channeling their grief in a cross-border, social-media campaign to solve the aviation mystery.

He is one of hundreds of relatives who -- desperate to learn the fate of their loved ones -- are channeling their grief in a cross-border, social-media-enabled, but so far frustrating citizen campaign to solve aviation&39;s greatest mystery.

"Malaysia Airlines and others are not doing their jobs so we have to organise," Wang, who abandoned graduate studies in Sweden to be with his grieving mother, said via Skype from his home in the city of Anyang.

"I cannot live the rest of my life in questions."

Through Chinese micro-blogging site Weibo -- 153 Chinese were aboard MH370 -- a closed Facebook group, and Skype "meetings" of up to dozens of people, participants exchange findings, discuss the latest theories, and proposals for group action.

The group, calling itself Voice370 with some 300 members, receives and debates advice from aviation, legal and other experts, while similar groups formed after previous disasters such as the 2009 Air France crash offer support.

While some face-to-face meetings have been held, most exchanges are conducted via webcam or extensive email strings, with members voting on strategies for pushing Malaysia Airlines and governments involved in a still-fruitless search for more information.

In doing so, they juggle time zones and language barriers -- "meetings" are held mainly in English, with bilingual Chinese translating for their countrymen.

"It&39;s really quite a community," said Sarah Bajc, an American whose partner Philip Wood was on the flight.

"I feel compelled to do everything in my power to find Philip. We owe it to them."

No trace has been found despite an extensive, Australian-led search in the southern Indian Ocean.

Some next of kin have sharply accused the airline and Malaysian authorities of a bungled response -- its military tracked MH370 on radar after it mysteriously diverted, but did nothing -- and withholding data from the public.

Yet despite their efforts, families have seen only modest success.

In an open letter to authorities in Malaysia, Australia and China in May, a skeptical Voice370 demanded to see satellite and other data that Malaysia says indicates MH370 went down in the Indian Ocean.

The information was eventually released but shed little light on what happened.

In June, several families, including Bajc, launched a drive to raise $5 million for any whistle-blower with information on the jet&39;s fate. Only $100,500 has been raised.

Families denied AFP&39;s request to sit in on meetings.

The airline and Malaysian government deny charges of a cover-up and insist they will leave no stone unturned.

"We would like to assure the next of kin of MH370 that our commitment to the search for this flight has remained consistent and has strengthened," Transport Minister Liow Tiong Lai said in an August 9 statement.

The government is yet to announce any findings of its investigations into MH370.

Its attention is now diverted by the July 17 downing of another Malaysia Airlines passenger jet, MH17, over war-torn eastern Ukraine, a tragedy that also ripped open emotional wounds for many MH370 next-of-kin.

But she and others admit resignation is setting in.

Bajc no longer joins the video meetings, as she and others look increasingly for other ways to pressure authorities, such as mulling possible lawsuits against the airline or Boeing to reveal more.

No significant lawsuits have been filed yet. Some families, however, say they are sifting through the complexities of where and how best to file a case in such an unprecedented disaster.