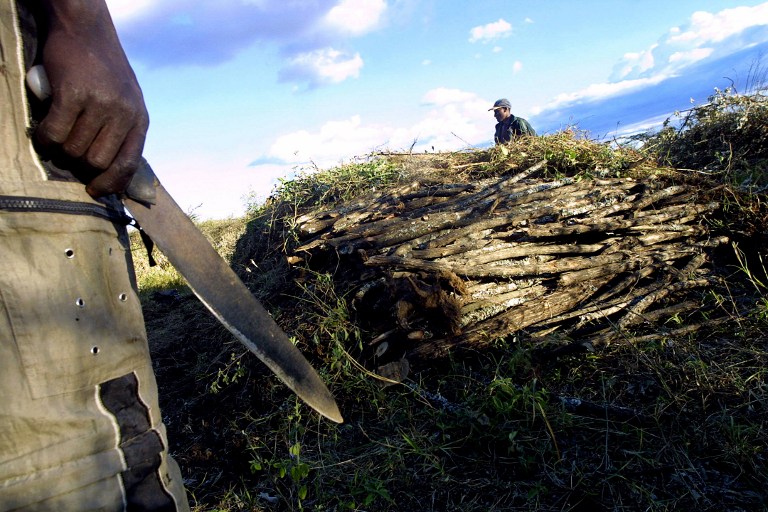 Kenyan charcoal makers pile wood before baking it into charcoal under an earth mound. Charcoal making is partly to blame for Africa's diminishing forests where the use of traditional forms of fuel like charcoal is still widespread.

KASIGAU, Kenya - When 61-year old Mercy Joshua was young, the vast forests of southeastern Kenya teemed with wildlife, but decades of unchecked deforestation by locals have devastated the land.

She watched forests dwindle and rivers dry up across her homeland of Kasigau -- a semi-arid savanna grassland dotted with shrubs, woodland and small rugged hills -- as people cut down the trees to scratch a living by selling them for firewood.

But now, after decades of degradation, a local project has found a way to preserve the forests and support the community by getting international companies to pay to plant trees.

"We were losing everything, but thanks to the project we have learnt even how to live with the wild animals," said Joshua, a mother of four.

The project has breathed new life into Kasigau, a 200,000 hectare dryland forest 330 kilometres southeast of the capital Nairobi that connects the two halves of Kenya&39;s renowned Tsavo national park.

Founded in 2009, it is part of a UN-backed carbon credit scheme aimed at stopping 54 million tonnes of carbon dioxide being released into the atmosphere over the next 30 years, equivalent to 1.2 million tonnes a year.

Leading buyers of the credits include Microsoft, Barclays Bank and Kenya Airways, which have invested $3.5-million each since the project started.

These companies buy carbon credits by paying to conserve existing trees and plant new ones.

The forests soak in carbon from the atmosphere, helping to reduce carbon dioxide levels in the air and so offset what the companies release themselves.

The Kasigau scheme has also created a new source of income for impoverished local communities where most people scrape a living by hunting animals for meat or illegal charcoal production.

"There are no jobs here, no water, and I have a family to feed," said Matthew Mutie, a 40-year-old father of three who supports his family by making charcoal for around $3 a sack.

"Most of the people in this area are subsistence farmers and in most cases their crops fail due to poor rainfall," added Rob Dodson from Wildlife Works, which oversees the Kasigau project.

In a deeply poor region where many people live on $1 per day, the project has made a major impact, bringing in an average of $270 per person a year -- about a quarter of Kenya&39;s GDP per capita.

Deforestation accounts for roughly 15 percent of global greenhouse gas emissions every year, pumping more carbon dioxide into the atmosphere than the global transportation sector, according to Wildlife Works.