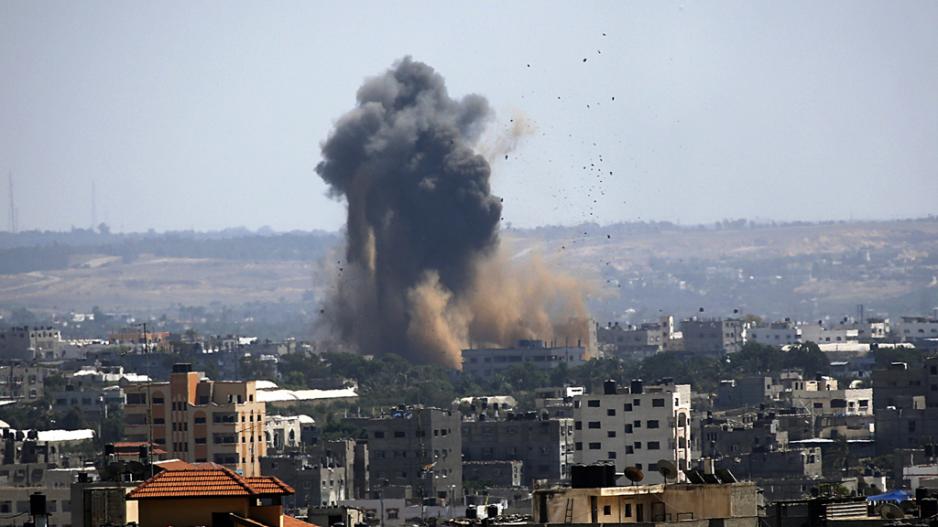 Smoke rises after an attack on Gaza City, 15 July 2014. Israel resumed airstrikes on the Gaza Strip, six hours after it unilaterally accepted a truce while armed groups in Gaza continued firing rockets.

Israel accepted Cairo&39;s plan, but warned it would strike Gaza even harder than it has so far - if Hamas didn&39;t abide by the proposal as well.

The Islamic militant group didn&39;t close the door to truce talks, however.

It appeared instead to be holding out for better conditions, with senior officials saying the Egyptian plan offers no tangible achievements, particularly on easing a border blockade of the coastal strip, which has been enforced by Israel and Egypt for the past seven years.

The situation remained volatile, suggesting Egypt&39;s efforts to end a week of fighting could quickly run aground.

Third round of hostilities

Since the outbreak of cross-border fire on July 8, more than 190 Palestinians have been killed and millions of Israelis have been exposed to rocket fire.

It is the third major round of hostilities between Israel and Hamas in just over five years - but also one in which the impact on Israel has been much mitigated by the success of its &39;Iron Dome&39; air defense system in shooting down Hamas&39; rockets and preventing Israeli fatalities to date.

The previous bout, in 2012, eventually ended with the help of Egypt, at the time seen as a trusted broker by Hamas.

However, Hamas deeply distrusts Egypt&39;s current rulers, who ousted a Hamas-friendly government in Egypt a year ago, and have tightened the border blockade on Gaza.

Under the Egyptian plan, proposed late Monday, a 12-hour period of de-escalation was to begin at mid-morning on Tuesday.

Once both sides agree to halt hostilities, they would negotiate the terms of a longer-term truce.

Israel accepted the proposal at a Cabinet meeting on Tuesday.

However, Israeli Prime Minister Benjamin Netanyahu warned that "if Hamas rejects the Egyptian proposal and the rocket fire from Gaza does not cease, and that appears to be the case, we are prepared to continue and intensify our operation."

Gaza militants fired at least 35 rockets at Israel after mid-morning Tuesday, hours past the Egypt-proposed time for de-escalation.

The Israeli military said several rockets reached deep into Israel, including near the northern port city of Haifa. Sirens also went off in the towns of Hadera and Zichron Yaakov, more than 100 kilometers (60 miles) north of Gaza.

The military wing of Hamas, which has been responsible for most of the hundreds of rockets launched at Israel in the past week, said the Egyptian plan "wasn&39;t worth the ink it was written with."

Later on Tuesday, a Hamas police spokesman reported an Israeli air strike on an apartment in north-eastern Gaza, but the Israeli military denied it had attacked targets in Gaza at the time.

Hamas officials, meanwhile, complained that they hadn&39;t been consulted by Egypt about the cease-fire plan.

They said they need detailed assurances that Gaza&39;s borders will be opened, particularly the Rafah crossing between Gaza and Egypt, the territory&39;s main gate to the world.

Egypt has sharply curtailed travel in and out of Gaza over the past year, following last year&39;s ouster of the Hamas-allied Muslim Brotherhood from power by the Egyptian military.

Hamas also wants to be recognized by Egypt as a partner in any truce efforts. "We did not receive any official draft of this Egyptian proposal," said Sami Abu Zuhri, a senior Hamas official in Gaza.

He said the Egyptian plan, as is, is "not acceptable."

Hamas officials are wary of promises by Egypt and Israel to ease the border blockade.

Such promises were also part of a truce that ended more than a week of fighting in 2012, but were not fully implemented as the strip remained under blockade.

An easing of the blockade of the coastal strip is key to the survival of Hamas.

Before the outbreak of the latest round of fighting, the militant group found itself in a serious financial crisis because a particularly tight closure by Egypt had prevented cash and goods from coming into the strip through hundreds of smuggling tunnels under the Gaza-Egypt border.

In Israel, the decision to accept the cease-fire was praised by the centrist Israeli opposition, but elicited strong criticism from lawmakers and members of Netanyahu&39;s hawkish Likud party, who said the assault did not succeed in halting Hamas&39; rocket-firing capabilities.

"In the circumstances that have been created we could have achieved a lot more. The threat of rockets has not been removed and the Hamas leadership has not been eliminated," Israel Katz, a Cabinet minister wrote on his Facebook page.