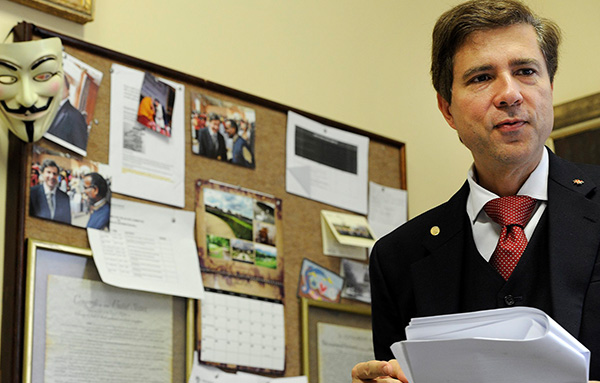 CAPE TOWN, SOUTH AFRICA - OCTOBER 11: Ambrosini was a member of parliament on behalf of the Inkatha-Freedom party. He was diagnosed with stage 4 lung cancer in April 2013, and travelled abroad to seek help from scientists.

JOHANNESBURG - A statement released by the family of Mario Oriani-Ambrosini on Monday evening confirmed to eNCA that the controversial and colourful IFP MP took his own life.

"Mario was in the last stages of terminal lung cancer and decided to end his long battle of suffering," his family said in the statement.

"This was a positive and very conscious decision on his part. He did not want to suffer anymore, nor did his family too."

Weekend reports suggested that he died in the early hours of Saturday morning at the age of 53, after a protracted battle with cancer.

"He decided to end his suffering," his family said, adding: "This choice was made not out of weakness, fear or despair, but from his courage or determination to be the final decision maker concerning his own fate."

Oriani-Ambrosini announced last year that he had been diagnosed with stage four lung cancer.

At the time, he said his doctors did not expect him to see Christmas 2013.

Oriani-Ambrosini said he had rejected chemotherapy as a treatment option, as it would extend his life expectancy by only a few months and would cause severe side-effects. He had opted to pursue treatment based on "different science".

In February this year, he tabled legislation to decriminalise the medical use of dagga.

Oriani-Ambrosini, who had just returned to the National Assembly after months of absence, made an impassioned plea to President Jacob Zuma and his government to decriminalise "medical marijuana".

His family said he had many battles in life but his battle with cancer was his toughest.

"Nonetheless, he continued to fight, not only for his own sake, but on behalf of the countless people who face this same battle.

"His contribution to the fight against cancer will be remembered forever with appreciation and his work will be continued through the Cancer Treatment Campaign, which he started early this year," the family said.

Family of IFP Mario Ambrosini have confirmed he took his own life. It was a conscious and meaningful decision . More on @eNCAnews

Ambrosini had final stages of lung cancer. Was in a lot of pain @eNCAnews

Mario Ambrosini did not did of natural causes. Family statement to follow. @eNCAnews