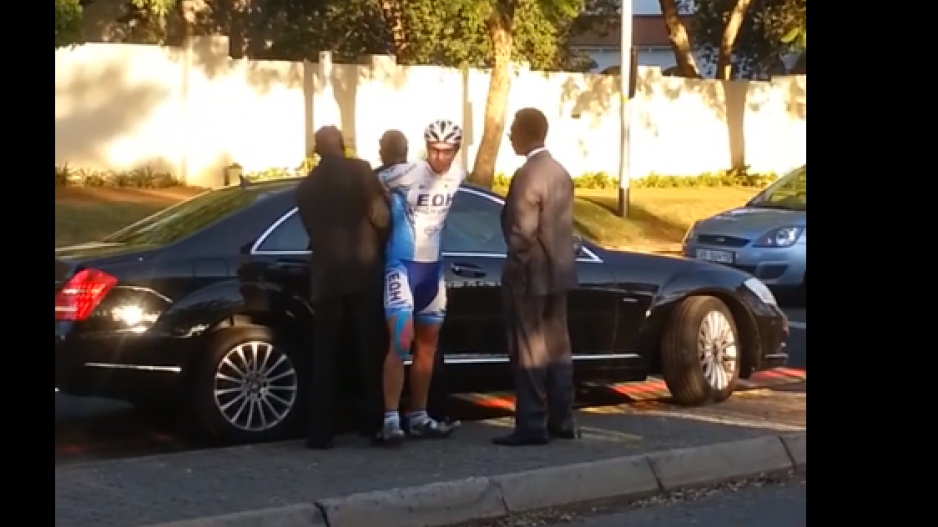 Unknown cyclist is manhandled by what is believed to be diplomatic personnel on Roper Street in Pretoria. Picture:

PRETORIA - Cyclist, Hein van der Merwe, who was manhandled by unidentified diplomatic security officials in Pretoria on May 8, 2013, has handed a personal account of the incident to eNCA.com.

What follows is the report, in his own words.

"On Wednesday, the 8th of May, while out on a training ride (bicycle) I was nearly hit by a Black Mercedes Bends on the corner of Roper (road leading out of University of Pretoria) an brooks, the vehicle drove down Roper street and didn’t attempt to slow down or stop at the stop street, and preceded to cut in front of me, traveling North on Roper with me having right of way. In my attempt to get the drivers attention by cycling next to the driver sides door/window repeatedly shouting and in a final attempt to get his attention, hitting down twice on his side wing mirror (which was completely un damaged), the vehicle deliberately tried to run me over by swerving into me right outside Pretoria Boys High and the 3 way stop street on the c/o Roper and Anderson, in a manner that also nearly caused a traffic accident as the vehicle nearly collided with another vehicle travelling south on Roper. It then became evident by registration of the car that it is a DIPLOMATIC vehicle. [key to note here is that a short while later the Driver 1. Admitted that he saw me at the previous intersection and felt he didn’t have to stop and that I will have to take evasive action to counter act his driving decisions, 2. The driver also stated that the second incident of deliberately trying to run me down was by instruction of the Diplomat sitting in the car, he also told this to the police officer who was on scene, when the police officer asked him why he broke protocol by not driving to the embassy.]

After an exchange of words/ heated argument, where I told the driver after him asking me why I was throwing such a scene was that I wanted him to apologies as it is drivers like him that hit and seriously injure cyclists using our public roads  (mostly captured on video) the driver of the car (who broke diplomatic protocol by instruction of the Diplomat in the car) threatened to brake my neck (this has been admitted by the driver to witness and there is a recording of him saying that he himself did say it) , along with this the driver tried to prove that he will act out his threat as in the process of stating it, he removed his jacket and tie in an attempt to intimidate me. He tried to tempt me to hit him by telling me to, but I refused as I knew everything was being taped, and that I have not done anything wrong and wanted to keep my side of the story clean.

I repeatedly tried to obtain the nationality of the diplomat;

2ndly I attempted to ask the diplomat directly through the drivers open window where the diplomat himself directly threatened me and told me I was going to go to jail and that he will see to it, the driver then pulled up the window.

The situation went calm as we where waiting for the police to arrive,  the driver/diplomat had called them. Minutes before the police arrived the diplomat turned down the window opposite to him, I used this opportunity to take a photo of him as no one wanted to tell me the nationality of the diplomat. The body guard saw this, and the driver the preceded to hit my phone out of my hand cracking the glass of the phone, and took the phone after the body guard openly assaulted me while I was screaming for help (captured on tape by n school boy who&39;s details I have and will receive the video).

After practically being rescued by passers by and parents of student, the police (Diplomatic police) arrived, I told them what happened, that I wanted to press charges, and required their assistance. They where rude (the police) and arrogant, took down only my info, address, cell etc. and got into their car and everybody drove off as of nothing happened.

Apart from minor help received from the police they forced me to delete any footage taken of the people involved, and also intimidated and harassed a school child who was taking the videos, and he was forced to delete some footage, of after the police arrived.

I then went to the Brooklyn police station to press charges and open a docket where they told me "they cannot open a case and that I have to go to some headquarters in troy street. As it involves diplomatic police and foreign diplomats”