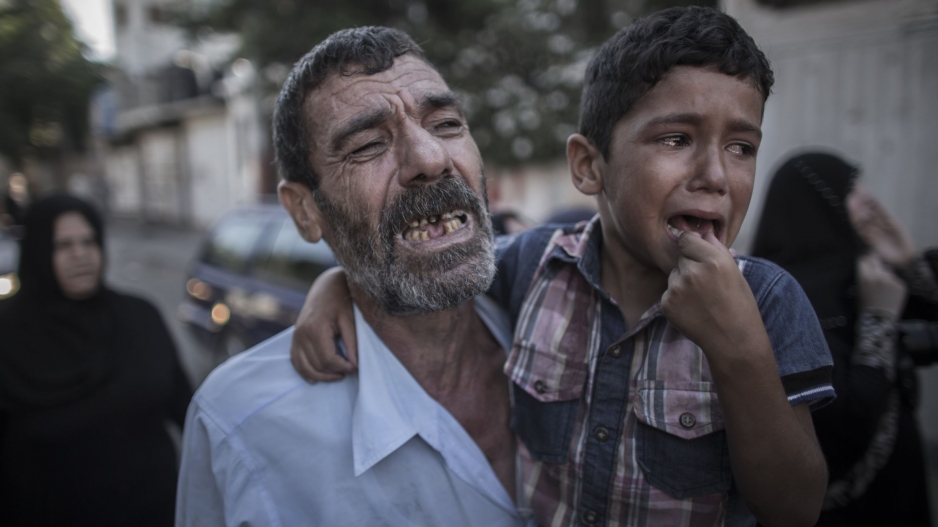 The father and brother of two of the boys who got killed by an Israeli naval bombardment in the port of Gaza cry during their funeral in Gaza City, 16 July 2014.

GAZA CITY - Israel and Hamas have agreed to a UN request to halt hostilities for five hours on humanitarian grounds on Thursday, while efforts continue to broker a longer-term truce.

The sides announced the temporary lull in fighting across the Gaza border after an Israeli strike killed four children on a beach in the coastal strip on Wednesday.

Israel&39;s campaign, which entered its 10th day on Thursday, has killed 224 Palestinians so far, with a Gaza-based human rights group saying over 80 percent of them were civilians.

Since July 8, militants have fired more than 1,200 rockets at Israel. They claimed their first Israeli life on Tuesday.

The army said early on Thursday that 82 rockets had hit Israel during the course of Wednesday and more than 30 were intercepted by Israel&39;s missile defences.

Hamas had rejected initial Egyptian efforts for a full ceasefire, saying it had not been included in the discussions.

The Israeli army announced it would halt its bombardment of Gaza between 10:00 am and 3:00 pm (0700 to 1200 GMT) Thursday, following a UN request for a humanitarian truce.

"The Palestinian factions agreed to accept the offer from the United Nations for a cooling-down on the ground for five hours starting from 10 in the morning," spokesman Sami Abu Zukhrisaid.

But in the small hours of Thursday Israeli air strikes continued to shake Gaza and rockets kept flying into Israel, each side said.

"Over the next 24 hours, we&39;ll continue to stay in close contact with our friends and parties in the region, and we will use all of our diplomatic resources and relationships to support efforts of closing a deal on a ceasefire."

Obama said that while he and the world were "heartbroken" by the deaths of civilians in the Gaza Strip, US ally Israel had the "right to defend itself from rocket attacks that terrorise" its population.

In addition to the four children who died on the Gaza seashore, several people were also wounded in an apparent Israeli naval bombardment, medics said.

The strikes appeared to be the result of shelling by the Israeli navy against an area with small shacks used by fishermen.

Several children ran inside a hotel where at least three had shrapnel injuries.

Several hours after the strikes, the Israeli military described the deaths as "tragic" and said it was investigating the incident.

"Based on preliminary results, the target of this strike was Hamas terrorist operatives," the military said in a statement.

"The reported civilian casualties from this strike are a tragic outcome."

The Israeli military dropped flyers and sent text messages Wednesday warning 100,000 people in northeastern Gaza to evacuate their homes ahead of an air campaign targeting "terror sites and operatives" in Zeitun and Shejaiya, two flashpoint districts east of Gaza City.

An identical message was sent to Beit Lahiya in the north.

But for patients at Al-Wafa hospital in Shejaiya, the warning simply provoked even more fear.

"There is no place safe in Gaza," director Basman Alashi told AFP, adding that most of his patients were completely incapacitated.

"If a hospital is not safe, where is?" he said as the sound of nearby shelling rattled the windows.

Hamas dismissed the warning as a scare tactic, telling residents there was "no need to worry."

Prime Minister Benjamin Netanyahu vowed on Tuesday to step up the military campaign after Hamas dismissed an Egyptian ceasefire proposal, firing scores of rockets over the border despite the army holding its fire for six hours.

"This would have been better resolved diplomatically... but Hamas leaves us no choice but to expand and intensify the campaign against it," he said.

His security cabinet authorised the call-up of another 8,000 reservists, media reports said, joining 43,000 reserve troops who have already been mobilised.

Azzam al-Ahmad, a senior member of Abbas&39;s Fatah movement, said a Hamas official was in Cairo to hold talks with Egyptian officials.

Ahmad expressed hope that the talks in Cairo would "crystallise a definite formula for an Egyptian initiative" or clarify its initial plan, which had proposed an end to hostilities from Tuesday.

Abbas himself later arrived in Cairo to join the diplomatic efforts and was slated to travel to Ankara on Thursday in search of regional support for an immediate end to the fighting.

Egypt&39;s initiative was designed "to allow all the issues that are at the heart of this problem... to be dealt with in a thorough and proper way," Blair said.