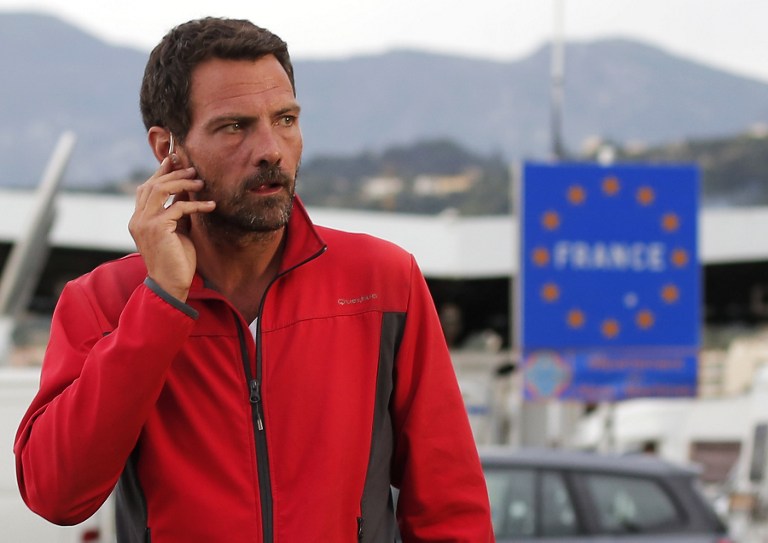 Former trader Jerome Kerviel speaks on the phone near the French border. Kerviel, facing prison on his return to France, dramatically announced today that he would be staying in Italy for the time being.

VENTIMIGLIA - Rogue trader Jerome Kerviel on Sunday demanded an audience with President Francois Hollande as he defied a deadline to return to France to begin a three-year prison term.

The 37-year-old, who brought one of Europe&39;s biggest banks to the brink of bankruptcy in 2008, has spent the last two months on a walk from Rome intended to raise awareness of what he regards as his unfair treatment by the courts.

Ordered to present himself at a French police station by Sunday to start serving his sentence, the former Societe Generale trader said he would not be crossing the border until he heard back from Hollande on his case.

"I am staying here for now," Kerviel told reporters outside a hotel in the Italian border town of Ventimiglia, where he spent the past two nights. "I am waiting to hear the position of the president of the republic."

The Paris state prosecutor said that Kerviel would be considered a fugitve from justice as of midnight (1000 GMT) and that a European arrest warrant would be issued against him in the coming days.

Kerviel says he wishes to detail to Hollande "the serious failings" that led to his conviction, following the loss of nearly five billion euros through wildly risky trades.

The former Societe Generale trader says he is not seeking a pardon, but has asked Hollande to grant immunity to potential witnesses who could testify in his favour.

Kerviel continues to maintain that the bank was just as much at fault as he was.

He insists, however, that he is ready to serve his sentence and his lawyers said they would be heading to Paris Sunday evening and would be "available" to discuss the case with the president or his staff.

Contacted by AFP, Hollande&39;s office said no meeting was on the agenda and stressed that the president would "respect the decisions taken by French courts."

Kerviel was tramping through Tuscany when France&39;s top appeals court in March upheld his 2010 conviction for breach of trust, forgery and entering false data in relation to unauthorised deals that brought his former employer to the brink of collapse.

The ruling left Kerviel, who served 41 days in pre-trial detention in 2008, liable to be imprisoned at any time within five years of the verdict.

Kerviel&39;s defence asked the state prosecution to suspend the application of his sentence.

"There is no urgency in jailing him, other than to silence him," said the statement.

The ex-trader has become something of a cause celebre in France, winning support from prominent left-wingers and leading figures in the Roman Catholic Church who believe he has been unfairly scapegoated for the shortcomings of the entire banking system.

One of his supporters, the priest Patrice Gourrier, who has been walking at his side, has said he would fast until the sentence was suspended.

Although the March ruling upheld Kerviel&39;s prison sentence -- five years of which two were suspended -- it cancelled an order for the former trader to pay back the money he lost and ordered a review of the damages award.

Kerviel&39;s lawyers argue that this decision means the bank will effectively be put on trial over the failure of its supervisory system. His supporters say it is unfair for him to go to prison while the courts have not resolved that issue.

By staying in Italy, though, Kerviel risks further charges over his defiance of a judicial system that had appeared lenient in not insisting on him returning to France immediately after his conviction.