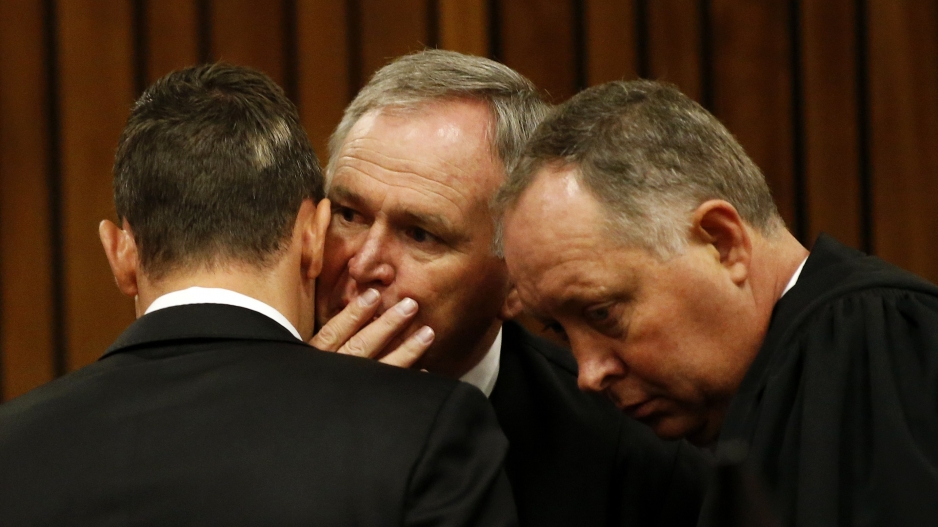 Olympic and Paralympic track star Oscar Pistorius (L) listens to his lawyer Barry Roux (C) ahead of his trial for the murder of his girlfriend Reeva Steenkamp, at the North Gauteng High Court in Pretoria, March 5, 2014.

PRETORIA - Lawyers for murder-accused Paralympian Oscar Pistorius are taking legal action over footage that emerged on Saturday of him re-enacting the night he shot his girlfriend Reeva Steenkamp.

"We are busy taking action against the Australian media house [that has the video]," said his attorney Brian Webber.

"They have no right to broadcast the video. We will deal with it accordingly."

The promotional video by Australian current affairs programme "Sunday Night" shows Pistorius walking on his stumps with an imaginary gun in his hand.

In another scene, Pistorius is seen carrying a woman out of his bathroom.

The website for the current affairs show said the video was "never before seen footage of Oscar Pistorius re-enacting the night he killed Reeva that convinced a top forensic expert he is innocent".

The video was scheduled to air on Sunday.

National Prosecuting Authority spokesman Nathi Ncube said it was not commenting on the video.

Pistorius&39;s family spokeswoman Anneliese Burgess said the legal team was investigating the matter and "have asked for urgent clarification from Channel 7 in Australia".

He claims he shot Steenkamp by accident through the locked door of his toilet in his Pretoria home on February 14, 2013, thinking she was an intruder.

The State argues he killed her during an argument.

Pistorius testified that he was on his stumps when he shot though the toilet door.

However, he said he put on his prosthesis before breaking down the door to get to Steenkamp.