A degree with a difference: using SA sign language instead of the written word 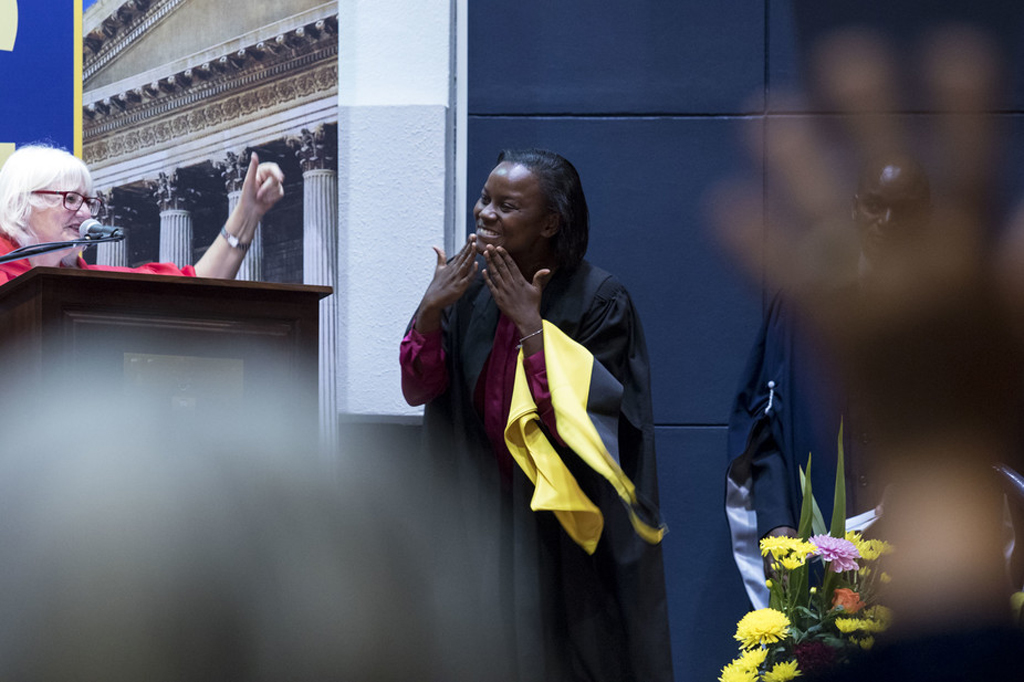 Nyeleti Nokwazi Nkwinika acknowledges the applause after graduating with her Masters degree.

Nyeleti Nokwazi Nkwinika was a year into her Master’s dissertation in English, and she was struggling. This has nothing to do with her work ethic: the problem lay with her hearing. Nyeleti was born deaf and like many others in her situation, she battles with written language.

Most deaf people are born into hearing families who don’t have any skills in Sign Language. In Nyeleti’s case, she only learned to use South African Sign Language fluently at school. When she got to high school she attended a mainstream hearing school with several other top performing deaf pupils from her previous school.

By then, she had missed out on too many years of access to English. South African Sign Language and English are differently structured. This can make it hard to learn for deaf people who’ve only ever used sign language to communicate. It’s also very difficult to learn written English when one has never heard the language or used it for conversational purposes.

Nyeleti was so frustrated and disheartened by the end of 2014 that she considered dropping out. Instead, we came up with a radical idea that would put Nyeleti, ourselves as her supervisors and a number of university structures to the test: she would submit her proposal and, ultimately, her dissertation, entirely in South African Sign Language.

In November 2016 Nyeleti graduated with her Masters degree. Her achievement is remarkable. It sets a precedent in South Africa and is one of only a few in the world – other signed postgraduate degrees have been completed in the UK, Japan and the US. We hope our experiences might offer some ideas and lessons to universities that wish to be truly inclusive.

Once we’d decided to go ahead with this ambitious plan and Nyeleti’s proposal had been approved by the external reader, we put together a video proposal for the university’s ethics committee. This body approves all postgraduate research proposals.

We arranged for Nyeleti to submit a DVD of her proposal as well as the standard written ethics application form. Initially the committee asked for an English translation of the proposal. It didn’t specify if this should be written by Nyeleti or spoken by someone else. We agreed to organise this – on condition that the committee paid the bill, which would have come to at least R2 000.

They let it go. Nyeleti’s ethics application was approved on the basis of her written abstract and completed forms.

Then the real work began.

It came with challenges we couldn’t have anticipated, like the length and nature of supervision sessions; the need to have an interpreter at each session and how best to film Nyeleti as she presented her work in South African Sign Language. Later on, we had to find a suitable external examiner and work out how best to present footnotes. And what about organising data into tables?

We suggested that Nyeleti initially create her tables with written words for signs on a flip chart and then sign each row while standing next to the flip chart. This was very lengthy (four hours of filming) and we later suggested she move these signed tables into the appendix and insert word document tables into the video with a short summary explanation of her findings while cross referencing the appendix.

The challenges all three of us faced along the way may offer valuable lessons for others in future. Deaf people still represent a tiny fraction of South Africa’s university students. There are no hard figures, but an informal survey among our colleagues at other institutions suggests there are around 24 SASL students – those who cannot hear enough to access spoken language – and around 44 non-signing oral deaf students who have sufficient hearing through hearing aids or cochlear implants to access spoken languages.

Hopefully these numbers will climb at all universities in future. South African Sign Language was introduced as a school subject for Deaf learners in 2015. The first Grade 12 cohort will write their final year exams in 2018.

Nyeleti’s success comes down to a number of factors. She showed extraordinary resilience and perseverance. The supervision process was non-conventional, but it was also team based, which added valuable support to a tough process.

Those who want to follow a similar path should bear in mind how important it’s to have a person with an academic background or an academic interpreter present during filming. Deaf students who want to take this approach also need more sophisticated editing training.

It’s also crucial to have engaged, understanding university departments involved. The involvement and understanding of different university departments in how to deal with a South African Sign Language proposal such as the ethics committee and the library in terms of uploading the completed filmed dissertation has also been highlighted. There’s also the time factor to consider – the supervisors need to be willing to put in the increased time needed and recognised for this at department and school level.

We had discussed the issue of signing rather than writing an MA before and the other side of the debate was that using South African Sign Language as the language to document research narrows the number of people who then have access to the research. It’s too expensive to get a translator to translate the sign language version into a written version. We are not sure it’s even possible as the translator would have to have an in-depth knowledge of the topic at hand.

Our response to this issue is that we as supervisors will co-publish a journal article with Nyeleti about her research.

Authors’ note: Deaf with a capital ‘D’ refers to being culturally Deaf while small ‘d’ deaf refers to audiological deafness. Oral deaf people are referred to with a small ‘d’ as they don’t use any sign language.