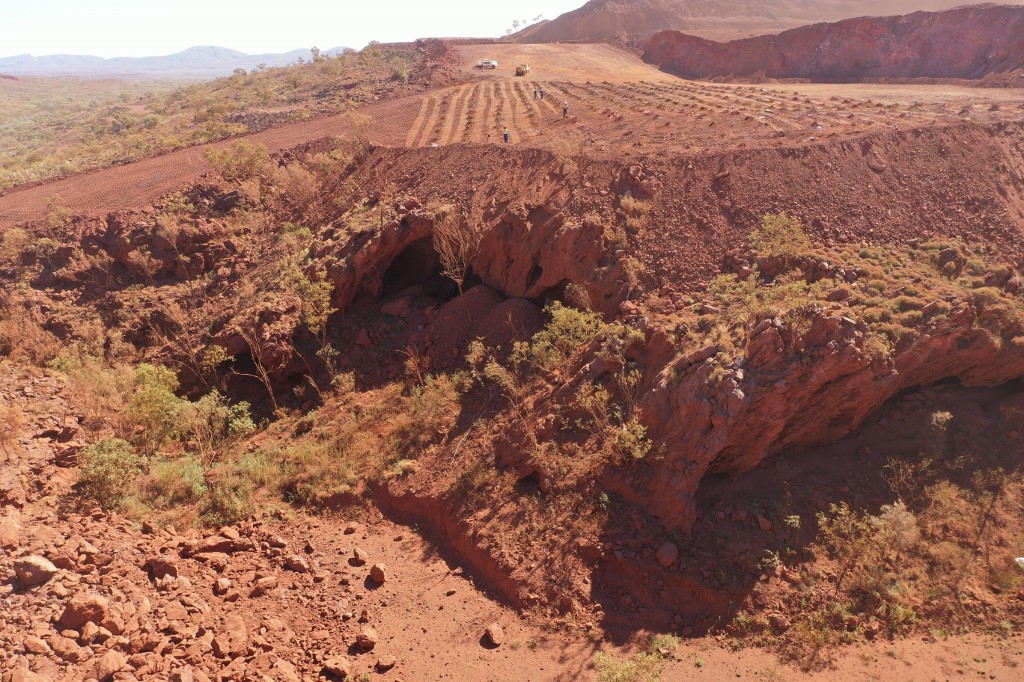 This handout file photo taken on May 15, 2020 and released by the PKKP Aboriginal Corporation and received by AFP on May 27, 2020 shows Juukan Gorge in Western Australia -- one of the earliest known sites occupied by Aboriginals in Australia. Rio Tinto announced the resignation of its CEO and two top lieutenants on September 11, 2020 over the mining giant's destruction of a 46,000-year-old Aboriginal site to expand an iron ore mine in Australia. The Anglo-Australian firm faced a growing investor revolt over the destruction of the sacred site in the Juukan Gorge in Western Australia's remote Pilbara region -- one of the earliest known locations inhabited by Australia's indigenous people.

SYDNEY - The traditional owners of an ancient Aboriginal site in Australia blown up by Rio Tinto accused the mining giant of a "shocking act of corporate vandalism" Friday in their first public comment on the incident.

The Puutu Kunti Kurrama and Pinikura (PKKP) people of Western Australia said Rio Tinto ignored their warnings against its plans to blast in the Juukan Gorge area of the ore-rich Pilbara region.

The operation in May, to expand an iron ore mine, destroyed a 46,000-year-old site that contained some of the oldest Aboriginal artefacts found in Australia and was considered sacred by the PKKP.

A public outcry and investor revolt sparked by the destruction led to the resignations earlier this month of Rio Tinto's CEO and two top lieutenants.

But the PKKP, in a submission Friday to a parliamentary inquiry into the incident, said more needed to be done to prevent mining companies from destroying more heritage sites.

"Transformational change is needed into how mining companies and Aboriginal communities interact," they said in a summary of the submission released to the public.

"We hope our submission provides a better understanding of our position in relation to the desecration of the Juukan Gorge sites and how this tragedy has deeply affected us," said PKKP Aboriginal Corporation chair John Ashburton.

"We believe it will provide some clarity about the events leading up to this shocking act of corporate vandalism to our very sacred site, as well as countering some of the information presented by Rio Tinto, which in our view is, at best, incomplete."

Although Rio Tinto had permission from the Western Australia state government to blast in the area, the PKKP said it had "raised alarm" that the placement of some explosives would destroy the heritage rock shelters and that the company could have protected the sites.

The PKKP cited a "deep-seated and systemic culture of 'minimum compliance'... and maximisation of profit" within Rio Tinto, a stance it said characterised a majority of mining proponents in Western Australia.

It also criticised the state government for failing to enact a "more rigorous and equitable" implementation of laws designed to protect heritage sites.

"Aboriginal communities are living with legacy agreements which have disadvantaged them and do not reflect provisions of the United Nations Declaration on the Rights of Indigenous Peoples."

The parliamentary inquiry is due to issue a report by December 9.

The cultural importance of Juukan Gorge was confirmed by an archaeological dig carried out at one of the caves -- known as rock shelters -- a year after Rio Tinto obtained approval to blast in the area.

The dig uncovered the oldest known example of bone tools in Australia -- a sharpened kangaroo bone dating back 28,000 years -- and a plaited-hair belt that DNA testing linked to indigenous people still living in the area.