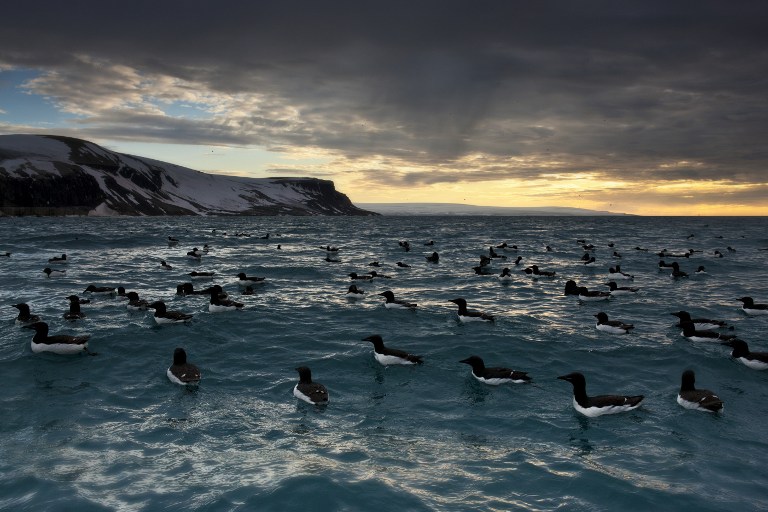 Brunnich's Guillemots on the water off the colony Svalbard.

Oslo - The Arctic ecosystem, already under pressure from record ice melts, faces another potential threat in the form of rapid acidification of the ocean, according to an international study published on Monday.

Acidification, blamed on the transformation of rising levels of the greenhouse gas carbon dioxide from the air into carbonic acid in the sea, makes it harder for shellfish and crabs to grow their shells, and might also impair fish reproduction, it said.

Cold water absorbs carbon dioxide more readily than warm water, making the Arctic especially vulnerable. The report said the average acidity of surface ocean waters worldwide was now about 30% higher than at the start of the Industrial Revolution.

"Arctic marine waters are experiencing widespread and rapid ocean acidification," said the report by 60 experts for the Arctic Monitoring and Assessment Programme, commissioned by the eight nations with Arctic territories.

"Ocean acidification is likely to affect the abundance, productivity and distribution of marine species, but the magnitude and direction of change are uncertain."

At almost 400 parts per million (ppm), there is now 40% more carbon dioxide in the atmosphere than before the industrial era began. Almost all experts say the rise is linked to the burning of fossil fuels.

With global surface temperatures rising, the Arctic sea ice shrank in 2012 to the smallest area since satellite records began, disrupting the hunting livelihoods of indigenous peoples and opening the region to more shipping and oil and gas exploration. As yet, the consequences of acidification are harder to predict.

Experiments with the eggs of brittlestars, which are related to starfish, showed that they died within days when exposed to the levels of acidification likely in coming decades, said Sam Dupont, one of the report&39;s authors from the University of Gothenburg in Sweden.

That would have knock-on effects on creatures that prey on them, such as crabs and fish.

The report said adult and juvenile fish were likely to cope with levels of acidification likely in the coming century but fish eggs and young larvae might be more sensitive.

In general, the report said, fish stocks might be more "robust to ocean acidification" if the other stresses they are already subject to, such as overfishing or habitat degradation, were minimised.

A warming of Arctic waters means that plankton are growing further north, providing a new source of food for fish such as cod and salmon, but Dupont said acidification would "constrain the positive effects of warming" for some species.

Meanwhile some types of seagrass seem likely to thrive with acidification.

Overall, Dupont said, acidification was "an additional stressor on a system that is already quite fragile".

The report will be presented to Arctic governments at a meeting in Sweden next week attended by U.S. Secretary of State John Kerry and Russian Foreign Minister Sergei Lavrov, among others.