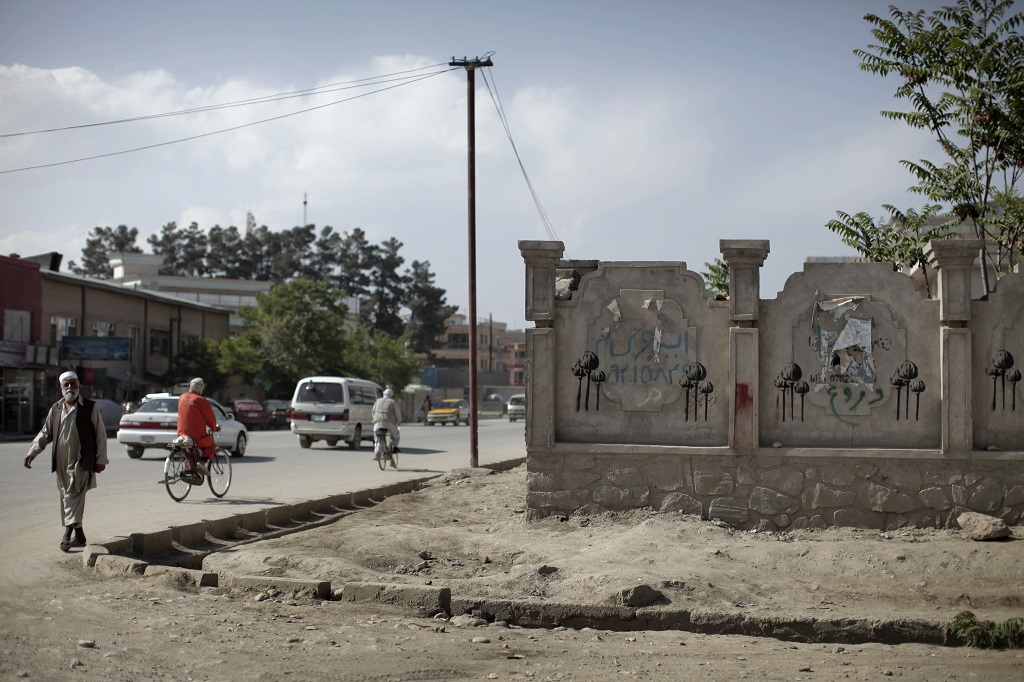 A man walks by a wall spray-painted with grafitti of poppy flowers in Kabul on 25 April 2010. On walls around Afghanistan's scrappy capital anonymous grafitti artists are daubing their disapproving take on the devastating cost of war.

KABUL - For days Hamida Barmaki&39;s smiling face stared out over traffic in Kabul, painted in a towering mural near the home of the warlord blamed for her death before it was mysteriously covered over in white.

The short-lived image on a concrete blast wall marked the beginning of a provocative campaign by social activist group ArtLords, whose artists are calling out Afghanistan&39;s most powerful by depicting people killed by warlords in giant murals in public places.

They have been threatened on social media, branded infidels, and told by gunmen and mullahs to stop painting -- but are unrepentant.

"This was a warning shot to everyone that we will not let you sleep at night, we will come after you, we will paint in front of your homes," ArtLords co-founder and president Omaid Sharifi told AFP at his studio in the Afghan capital.

Rather than seek justice for the countless victims — something that is not realistic given the huge number of them and the country’s weak judicial system — the group hopes to pressure warlords to acknowledge their past actions and apologise, Sharifi, 31, said.

Barmaki&39;s portrait was near the home of Gulbuddin Hekmatyar, one of the most notorious warlords in Afghanistan&39;s history.

His group carried out the 2011 suicide attack on a Kabul supermarket that killed Barmaki -- a prominent law professor and human rights activist -- as well as her husband and their four children.

Hekmatyar, whose spokesman declined to comment on the mural, is one of several infamous warlords that Kabul has sought to reintegrate into the mainstream political system in the post-Taliban era.

A two-time prime minister, he is accused of killing thousands of people during Afghanistan&39;s bloody 1992-1996 civil war.

Other such figures include General Abdul Rashid Dostum, a powerful ethnic Uzbek linked to multiple human rights abuses in Afghanistan who is now the country&39;s first vice president, and Atta Mohammad Noor, the former governor of Balkh province who is seen as a potential presidential contender but has been accused of having links to people involved in kidnapping and other crimes.

You&39;re not going to heaven

The murals -- which are typically several metres high and wide -- will put faces to the victims, Sharifi says, and send a message to warlords that "we have not forgotten... what they did in this country".

Over the past four years, ArtLords has turned Kabul&39;s grey maze of concrete barricades -- shaped like a wide-based inverted &39;T&39; to provide protection from bomb blasts -- into a canvas to tackle issues such as rampant corruption and abuse of power.

READ: Jo&39;burg by night: A time for dreamers, graffiti artists, lovers and dancers

With permission from local authorities, businesses and institutions, the group&39;s artists have painted more than 400 murals on blast walls and other prominent places in around half of Afghanistan&39;s 34 provinces.

Sharifi said the latest campaign would also target violent extremism of the Taliban and other militant groups now terrorising the country.

It is risky work for the group&39;s 45 artists, who are paid for their efforts.

Sharifi said he rarely goes out and is careful to use different routes when he does.

"The threat is very real. At any moment anything can happen, a bomb can go off," Sharifi said.

"Despite all these challenges... we have to take responsibility. Somebody has to do it."

The mural of Barmaki has changed the "narrative of street art in Afghanistan" and people were now recognising art as a "powerful tool" for social change, he said.

It has also galvanised other socially conscious artists around the country to use street art to send "very harsh messages to these people".

While ArtLords receives widespread support from Afghans and the international community for its work, the reaction on social media to the Barmaki mural has been mixed.

Some have applauded the group&39;s "courage and guts" while others have accused them of bias and exacerbating discord in the country.

"Use your art to promote unity and serve Afghanistan, do not use it to spread division," Facebook user Yaser Baburi wrote.

Sharifi admits the new campaign will upset people "because we will remind them of all these crimes".

"But I think this is the way to continue this discussion and force these people to come out and apologise for what they&39;ve done."

With the help of the public, ArtLords is compiling a list of warlords and people allegedly killed by them, who will be the faces of the next murals.

"We will have faces of these victims in front of their (warlords&39;) houses or the streets they are passing by," Sharifi said, without disclosing who will be targeted.

"There are a lot of names that come to mind."