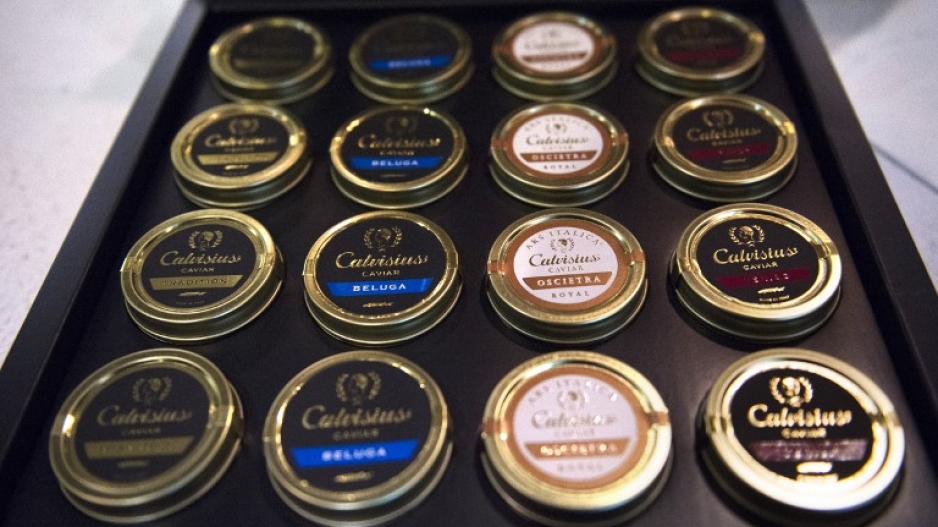 Different varieties of caviar like beluga and oscietra from Italy are displayed at the SIAL.

RUS, Poland - Foodies, take note: After flooding the global market with its vodka, apples and berries, Poland has gone gourmet and is trying its hand at making black caviar.
Dressed from head to toe in sterile clothing, a worker leans over a sieve containing roe from Russian and Siberian sturgeon. She uses tweezers to remove any leftover bits from the ovary sack -- anything to ensure the quality of the caviar.
Nor is hygiene to be trifled with at the fish farm in the northern Polish village of Rus.
"We produce unpasteurised, fresh caviar, so we have to make sure it doesn&39;t come in contact with even the smallest speck of bacteria," says farm head Marek Szczukowski.

"The taste of caviar largely depends on the quality of the air, the water, its temperature, the feed, but also the method used to obtain the eggs."

Everything here is up to hospital standards. Employees handle the precious eggs, whose colours vary from a golden brown to olive to black, in a room fit for surgery.
All the equipment, the walls, the floor and even the ceiling are stainless steel. As for the staff: no shower, no entry. The same goes for anyone without a hygiene mask, nurse cap and scrubs.
The air is swapped out 20 times an hour, and the room is sterilised for six hours every night.
Crystal clear water
Outside, thousands of sturgeon swim around in fish canals fed by the crystal clear water of the Lyna River. The fish are slim and muscular, with a pointed mouth for the Siberian sturgeon and a rounder one for the more coveted -- and expensive -- Russian variety.
Each female weighs between 10 and 20kg and carries roe totalling around 12 percent of its weight. Before winding up in Rus, the sturgeon spend the first seven or eight years of their lives on a parent farm in Goslawice, central Poland.
It extends across 2,000 hectares of lakes and 500ha of ponds heated by a nearby power plant.
"We are the biggest fish farm in Poland and one of Europe&39;s three main sturgeon producers," says marketing and sales manager Agata Lakomiak-Winnicka.
"We began farming sturgeon in 1992 and have been supplying Europe&39;s top caviar producers with it since 2008," she tells AFP.
"They&39;ve been a huge hit, so it was just a matter of time before we launched our own brand, Antonius."
Today, the two farms have more than 1,000 tons of sturgeon swimming throughout their waterways.
No ready-made recipe
Traditionally, caviar was made from eggs from wild sturgeon in the Caspian and Black seas with the best known producers in Russia and Iran.
Years of overfishing and pollution have left the sturgeon at risk of extinction.
The fish is protected under the 1973 Convention on International Trade in Endangered Species of Wild Fauna and Flora (Cites). Yet demand continues and caviar prices have skyrocketed, now retailing from around €1,700 (R24,000) a kilo and prompting many a country to try to cash in on the luxury food.
In 2012, caviar producers made 260 tons of the fishy delicacy in countries including France and Italy but also Israel, Uruguay and even Vietnam, according to the World Sturgeon Conservation Society.
The trickiest part of the production process is seasoning the eggs.
Many years of experience go into determining just the right amount of salt.
"Making caviar is an art. There&39;s no ready-made recipe," Szczukowski says.
The whole operation takes no more than 15 minutes: from carving out the roe-filled ovaries to vacuum packaging the caviar in elegant black and white boxes with the Antonius label.
"We want Poland to have its own caviar brand recognised around the world," says Lakomiak-Winnicka.
The potential is there, says French chef Michel Moran, who has lived in Poland for 15 years.
"Poland makes really good vodka, for example. We&39;re able to raise great quality livestock, we have great fish," says the chef at Warsaw&39;s Bistro de Paris.
"I don&39;t mean the Baltic Sea unfortunately, but if we get our fish from fresh water, we&39;re able to raise some really good stuff," he tells AFP.
"And now, a caviar like this, I&39;m convinced there&39;s a place for it on the market."