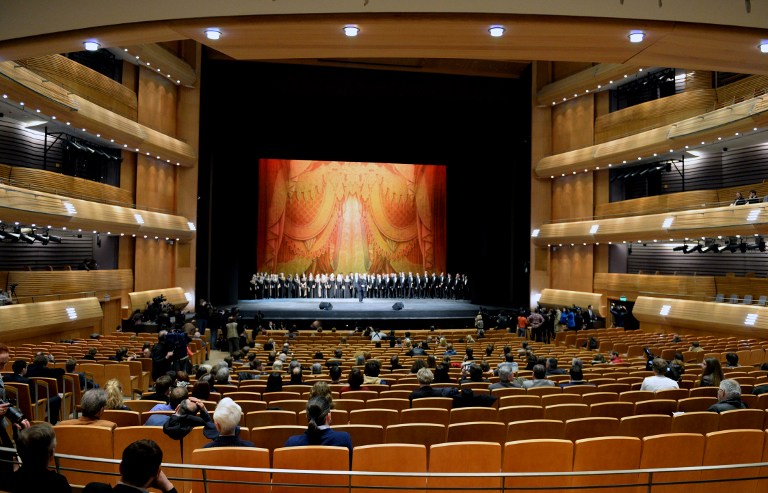 Viewers during the acoustical testing of the new stage at the State Academic Mariinsky Theater in St. Petersburg.

St Pertersburg - The hugely ambitious and well-connected director of Saint Petersburg&39;s Mariinsky Theatre will on Thursday oversee the opening of a controversial new ballet and opera house, one of the biggest cultural projects in post-Soviet Russian history.

The new "Mariinsky-2" theatre will open with a gala on Thursday night conducted by director Valery Gergiev with great performers from across the world and expected to be attended by President Vladimir Putin.

The new theatre lies just behind the historic Mariinsky Theatre in Saint Petersburg, which was founded in the 18th century and was the birthplace of the great ballets of Tchaikovsky like "Sleeping Beauty" and "Swan Lake".

"Russia has built a new theatre and this is just as much a huge event for the country as the Winter Olympic Games in Sochi (in 2014)," Gergiev, who turns 60 on Thursday, said in an interview with government daily Rossiiskaya Gazeta.

After years of false starts, the new theatre has taken years to build and some have already criticised its cuboid-shaped design as a blot on the historic city&39;s landscape.

The architectural competition was first launched in 2003 and the project, designed by Canadian firm Diamond and Schmitt Associates, has a total price tag of 21.6 billion rubles ($700 million, €500 million).

The initial design chosen in the competition - a much more daring project by French architect Dominique Perrault - was rejected in 2007 by the Russian authorities, who raised doubts on the stability of the future building.

But several prominent Saint Petersburgers - including the director of the Hermitage art museum, Mikhail Piotrovsky, and prize-winning filmmaker Alexander Sokurov - have queued up to denounce the new theatre&39;s design.

Gergiev however said that the theatre should be judged on its acoustic qualities above all and lashed out at the "self-promotion" of its critics.

The theatre is the centrepiece of Gergiev&39;s vision of making Saint Petersburg an international capital for music, which has already seen the creation of a brand new Mariinsky concert hall nearby.

Gergiev, currently also chief conductor of the London Symphony Orchestra, openly acknowledges that none of the plans would have been possible without the support of strongman Putin, whom he has publicly backed for restoring stability in Russia.

While rarely showing a personal interest in high culture, Putin clearly recognises its value as a calling card for Russia.

"If the president had objected, it would have been hard for us to talk about boosting the facilities of the theatre," Gergiev said.

The maestro appeared in videos ahead of 2012 presidential elections explaining why he would vote for Putin in his ultimately successful race to win a highly controversial and unprecedented third Kremlin term.

A pillar of Russian musical life for almost three decades, Gergiev conducted his first opera at the Mariinsky in 1978, when it still went by its Soviet name of the Kirov, in honour of the city&39;s former party boss.

After the collapse of the Soviet Union, the theatre regained its former name "Mariinsky", an adjective formed from the name of Empress Maria Alexandrovna, the wife of Tsar Alexander II.

The theatre rapidly, in the eyes of most critics, surpassed the artistic standards of the Moscow Bolshoi in opera and ballet, regaining its imperial-era supremacy in Russian cultural life.

Performers at the gala will include the great Spanish tenor Placido Domingo and the Russian soprano Anna Netrebko, whose early career at the Mariinsky catapulted her to international stardom.

Among the ballet dancers performing will be the supreme Russian ballerina of modern times, Ulyana Lopatkina, and the much-admired Diana Vishneva, in a gala that the theatre clearly hopes will outdo the reopening of Moscow&39;s Bolshoi in October 2011 after a major refit.

The event, which is being broadcast live on Russian state television, will begin at 1600 GMT and kick off a glittering array of events later in the week.