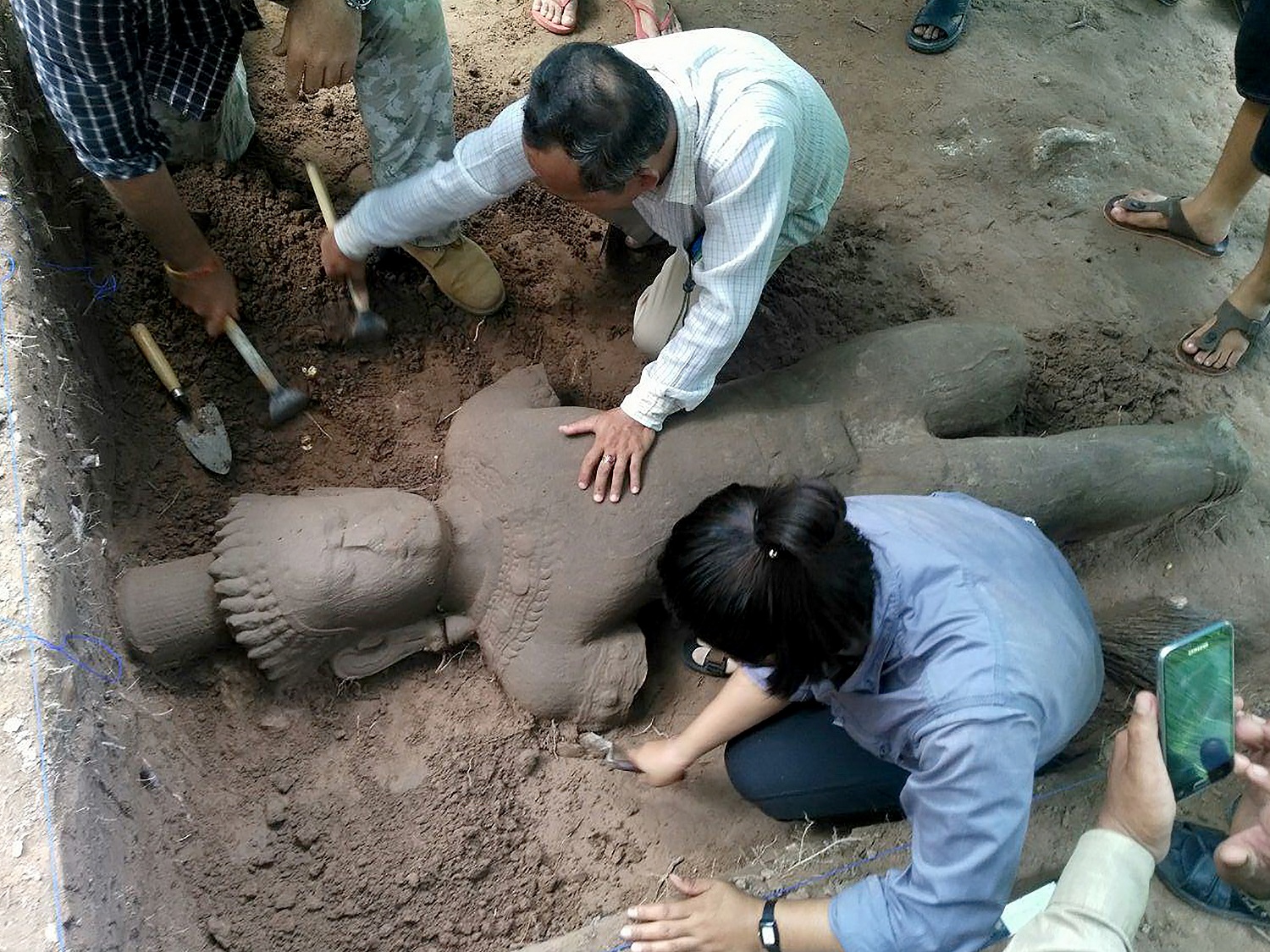 This handout photo taken on July 30, 2017 and released on August 1, 2017 by the Apsara Authority -- the state agency charged with managing the Angkor temple complex, shows archaeologists excavating a statue from the ground at the complex in Siem Reap.

CAMBODIA – Archaeologists unearthed a large, centuries-old statue that is believed to have once stood guard over an ancient hospital at Cambodia's world-famous Angkor temple complex.

The nearly two-metre-tall artwork, which is thought to date from the late 12th to the early 13th century, was discovered during a dig on Saturday, said Long Kosal, a spokesman for Apsara Authority - the state agency charged with managing the complex.

The new find is the most significant statue discovery at Angkor since two giant Buddha carvings were unearthed in 2011, he added.

The Angkor Archeological Park, a world heritage site, contains the remains of the different capitals of the Khmer Empire, dating from the ninth to the 15th centuries, and is Cambodia's most popular tourist destination.

At the height of its power, the city and its hundreds of temples boasted more than a million inhabitants, making it one of the world's most populous pre-industrial centres.

Huge swathes of the park have been excavated over the decades, creating a walkable archaeological wonder that attracts more than two million visitors a year.

But the complex continues to yield new finds.

Cambodian archaeologists and experts from Singapore's Institute of Southeast Asian Studies found the statue buried 40 centimetres underground during an excavation of an Angkor-era hospital built during the reign of King Jayavarman VII.

The Apsara agency said the sandstone statue's arms and legs had broken off but the carving on the body and head remain beautiful despite the passage of time.

They said the statue was likely to have been a symbolic guardian of the hospital.

Visitors to the Angkor complex encounter a dizzying array of temples, the earlier ones from when Hinduism was the dominant religion of the Khmer Empire and later ones after Buddhism had taken hold.

Archaeologists every year discover fresh data on the remarkable site. New recent research based on aerial laser scans has confirmed the existence of Mahendraparvata, an ancient temple city near Angkor Wat that has barely been excavated.

Updated scans published last year have uncovered iron smelting sites and complex waterways as well as temple foundations that are still to be explored.

The same year archaeologists also uncovered the remains of a 12.8-metre-long boat from the Angkor era which had been carved from a single tree trunk.

Archaeologists are particularly excited by the discovery of Mahendraparvata because they believe much of what remains of the jungle-covered ancient city has not been looted.

During French colonial rule and the brutal Khmer Rouge regime (1975-79) many of Cambodia's most priceless statues and archaeological treasures were looted, including those from Angkor.

The Cambodian government has spent years trying to trace the missing items, some of which have since been returned from museums in Europe and the United States.