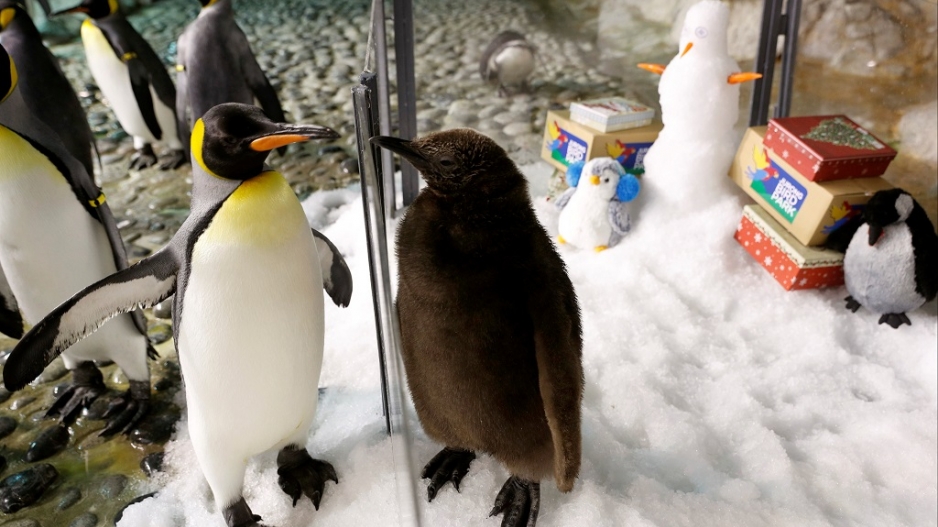 aru, a two-month-old King Penguin chick and the first successful hatching by the Jurong Bird Park in almost a decade, looks on from a Christmas theme enclosure in the Penguin Coast exhibit at the park in Singapore on December 13, 2017.

SINGAPORE - A baby king penguin waddled into view at  Singapore&39;s bird park on Wednesday, the first of its kind to be born there in almost a decade.

Maru, which means "round" in Japanese, came from parents Zoro and Sora, two of the king penguin herd in the Jurong Bird Park&39;s penguin exhibit.

To maximise survival chances, keepers retrieved the egg and incubated it until it hatched in October.

Weighing just 200g at birth, the hatchling was raised by keepers away from the colony on a blended fish diet and has now progressed to eating herring fillets and capelin. At 6kg, it is now 30 times its original weight.

At two months old, keepers decided it was time to introduce it to the adult group, which curiously surrounded the baby&39;s pen as it flapped its flippers and called out to the group.

The youngster will lose its brown down in about nine months for its adult plumage.

With a collection of nearly 5,000 birds, the Jurong Bird Park is Asia&39;s largest avian park.

In the wild, rising temperatures as a result of climate change have forced king penguins to travel further for food, which researchers say could cut their breeding season and hamper repopulation.