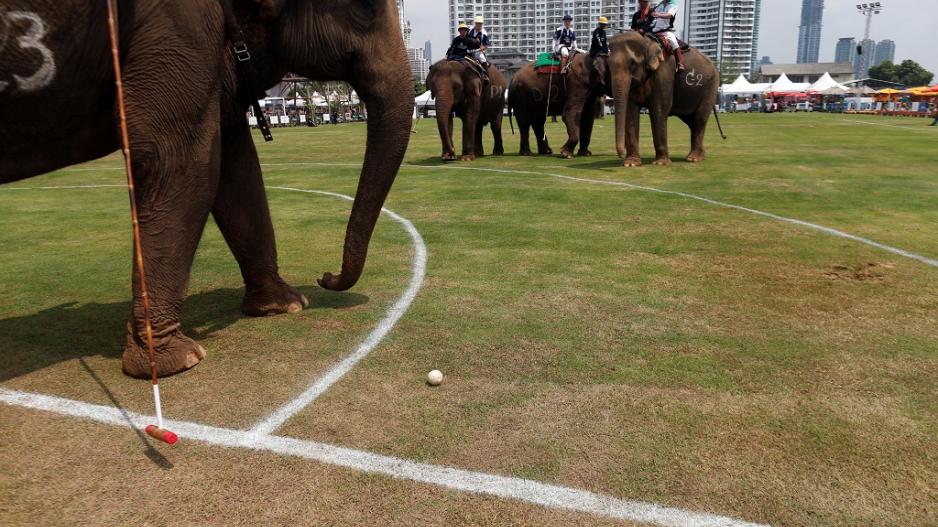 Elephants are seen during a match at the annual King's Cup Elephant Polo Tournament at a riverside resort in Bangkok, Thailand 8 March 2018.

BANGKOK - Elephants tromped across a manicured pitch in Bangkok on Thursday in the kick-off of a polo tournament that raises money for the animals, who are celebrated as a national symbol but are abused.

Dozens of elephants were trucked down to the Thai capital for the four-day King&39;s Cup Elephant Polo Tournament, an annual charity event that brings players from around the world to a field on the banks of the Chaophraya River.

The cup, now in its 16th year, has raised $1.5-million (about R17.8-million) for charities that help Thailand&39;s wild and domesticated elephants, according to event host Anantara Hotel.

The tournament has faced criticism in the past from animal rights activists, who say mahouts must inflict pain on the elephants to manoeuver them around the pitch and provoke crowd-pleasing roars.

But event organisers insist the competing elephants -- which include both animals who work in the tourism industry and others who are domesticated but unemployed -- receive plush treatment and plenty of time to rest.

"They are elephants that may normally work in camps somewhere ...and our aim is to bring them here for a week of vacation so to say. We have our vets here, they are being well fed, they&39;re having a very good time," Tim Boda, one of the event&39;s organisers, told AFP.

"They come and play maximum about 35 minutes per day," he added.

The money raised from last year&39;s competition was donated to training of mahouts and vets, plus projects aimed at mitigating the conflict between wild elephants and Thai villagers, according to event organisers.

A 2017 report by World Animal Protection found Thailand to be the global epicentre of the elephant tourism industry, in which businesses charge visitors for a chance to ride and bathe the beasts.

The kingdom employs twice as many pachyderms -- 2,198 -- in its tourism sector as the rest of Asia combined, with most of the animals kept in poor conditions, the report said.

Animal rights groups have long criticised the lucrative industry as inhumane, with many elephants relegated to lives on the end of a chain.