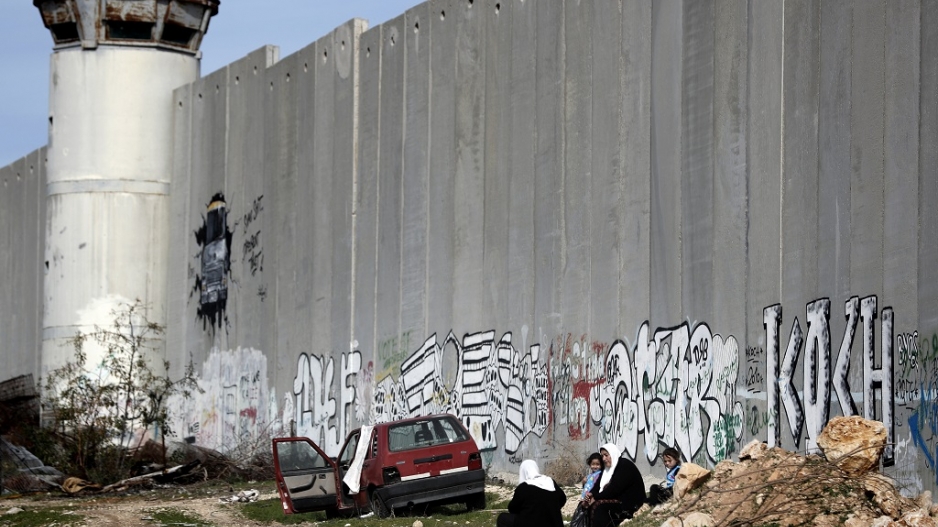 Palestinian women and girls sit in front of Israel's controversial separation barrier between the West Bank city of Bethlehem and Jerusalem on January 17, 2017.

BETHLEHEM - Secretive British street artist Banksy opened a hotel next to Israel’s controversial separation wall in Bethlehem on Friday, his latest artwork in the Palestinian territories.

The 10-room Walled Off Hotel fits in with the artist’s dystopian work, with rooms facing out onto the grim view of the wall, which cuts through the occupied West Bank.

Banksy's spokespeople insisted the building was not merely an artistic statement but also an active hotel, with rooms to be rented out later.

While it is forbidden for Israelis to visit most Palestinian cities in the West Bank, the part of Bethlehem where the hotel is located is under Israeli control, meaning Israeli tourists seeking to understand the reality of the occupation can also visit.

Bethlehem tourism firms have long complained that the wall and Israel's continued occupation of the West Bank have crippled business.

Banksy has a long history in the Palestinian territories.

In February 2015, he allegedly sneaked into the Gaza Strip through a smuggling tunnel and painted three works on the walls of Gaza homes destroyed in Israeli air strikes during the devastating conflict of the previous year.

In 2007, he painted a number of artworks in Bethlehem, including a young girl frisking an Israeli soldier pinned up against a wall.

In 2005, he sprayed nine stencilled images on the vast barrier erected by Israel to separate itself from most of the occupied West Bank.

READ: Gazans 'tricked' into selling Banksy for a song

The wall is one of the most striking symbols of Israel's 50-year occupation, and has become a major focus for demonstrations and art work.

Israel refers to it as the security barrier and insists it is crucial for keeping out would-be attackers.

Banksy said in 2005 that he considered the wall illegal and that his work sought to highlight the impact of the barrier on the lives of Palestinians.

His stencils  were sprayed hastily at different locations along the 8-metre wall for fear of Israeli soldiers.

They included a ladder reaching over the wall, a young girl being carried over it by balloons and a window on the grey concrete showing beautiful mountains in the background.

He admitted the wall made "the ultimate activity holiday destination for graffiti writers".