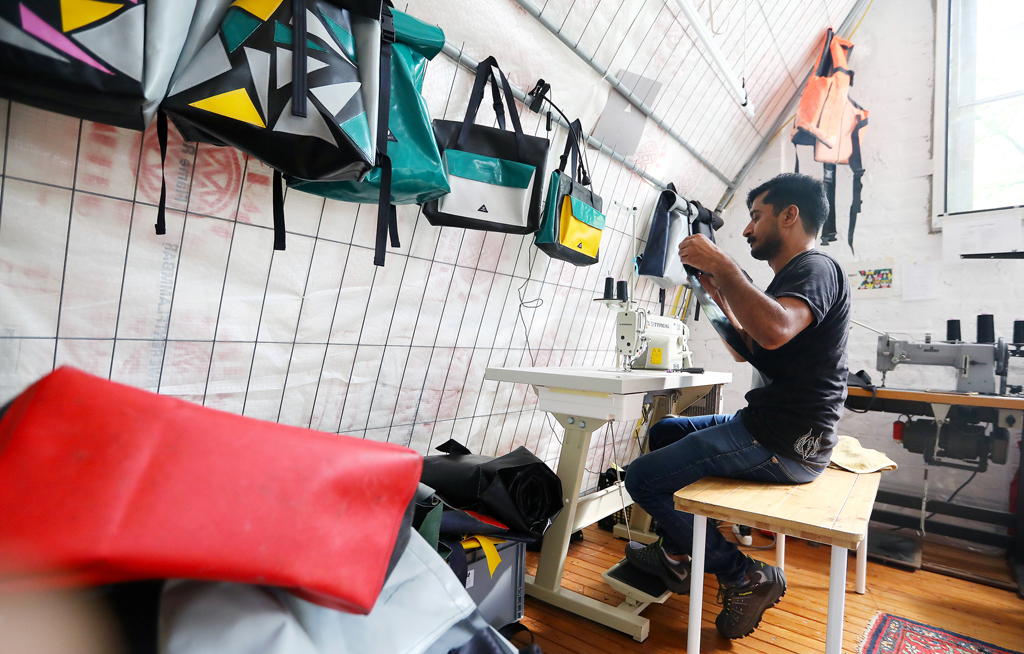 Migrant Abid Ali from Pakistan works as tailor and designer at the non-profit organization Mimycri, which recycles parts of a discarded dinghies into bags, in Berlin, Germany, July 23, 2018.

BERLIN - When Abid Ali risked his life in a rubber dinghy in 2015 as he fled Pakistan for Europe, he didn&39;t think that three years later he would be making bags, backpacks and sneakers out of similar boats in a small workshop in Berlin.

Ali, a tailor, is working with non-profit organisation Mimycri to upcycle the rubber from abandoned refugee boats found on beaches in Greece after often perilous sea crossings via Turkey.

Since Germany received more than a million migrants fleeing war and prosecution in the Middle East, Africa and central Asia in 2015, migration has become a major issue in Germany that is testing Chancellor Angela Merkel&39;s ruling coalition.

By making fashion accessories out of the rubber dinghies used by refugees, Mimycri wants to create jobs for migrants and give them a chance to show Germans their talents.

In Mimycri&39;s Berlin workshop, Ali carefully measures out a large piece of rubber on a workbench before cutting it precisely to size and skilfully using a sewing machine to craft a bag. Working with the disused rubber boats is not strange, he says.

Vera Guenther, Mimycri co-founder, and her project partner Nora Azzaoui came up with their idea in summer 2015 when they were volunteering to help refugees arriving at the Greek island of Chios.

"We want to process the plastic waste that lies on beaches in Greece into something new," Guenther said. "We want to create new job opportunities for the people who came newly here and have great talents."

Environmental groups say the plastic garbage of life vests and rubber boats left by migrants after reaching Greece in 2015 is a forgotten dimension of the refugee crisis with no comprehensive waste-management system on land.