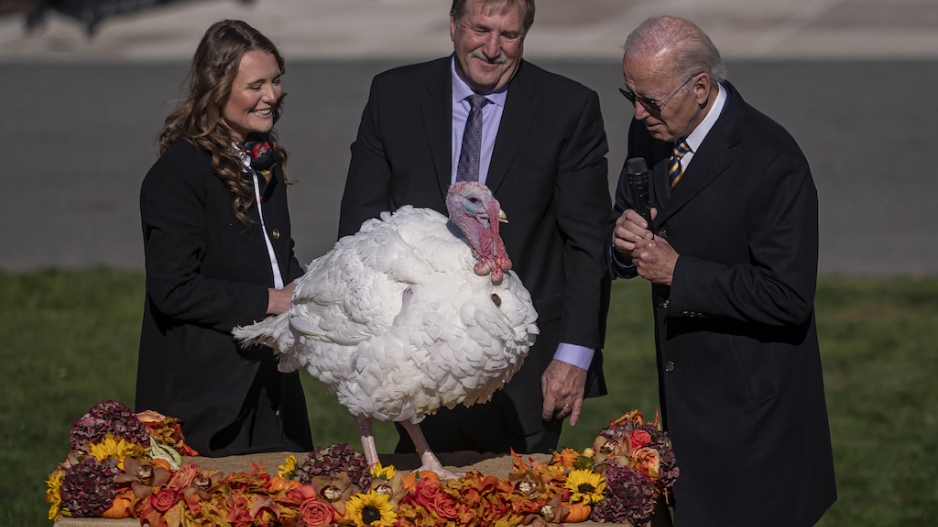 WASHINGTON - US president Joe Biden used his powers to pardon two turkeys, sparing them from winding up as the main course during an upcoming Thanksgiving dinner later this week.

"I hereby pardon Chocolate and Chip," Biden said at the pardoning ceremony on the South Lawn, a lighthearted autumn event that has become something of a White House tradition.

The large white birds, which were raised on a farm in North Carolina, were named for the president's favourite ice cream flavour, Biden told several schoolchildren who were present for the event.

"That's a big bird," Biden quipped as 21kg Chocolate was placed on a table.

Biden used the backdrop of the recent US midterm elections -- in which his Democrats fared better than many experts expected, retaining control of the Senate and only narrowly losing the House of Representatives to Republicans -- to crack jokes about the time-honoured turkey pardoning.

"The votes are in. They've been counted and verified. There’s no ballot stuffing. There's no fowl play," he said to laughter -- and likely a few eyerolls.

"The only red wave this season (related to the traditional colour of Republicans) is going to be a German Shepherd, Commander," the president said, referring to his dog, who "knocks over the cranberry sauce on our table."

Turkey with stuffing is the traditional dish that Americans serve at a family feast on Thanksgiving, which is Thursday.

Biden mentioned how the Covid-19 pandemic had interrupted or curtailed such commemorations by Americans in recent years and urged the invitees to feel gratitude for those who had protected US communities during the crisis, notably doctors, nurses and scientists.

"Two years ago, we couldn't even safely have Thanksgiving with large family gatherings. Now we can," he said. "That's progress, and let's keep it going."