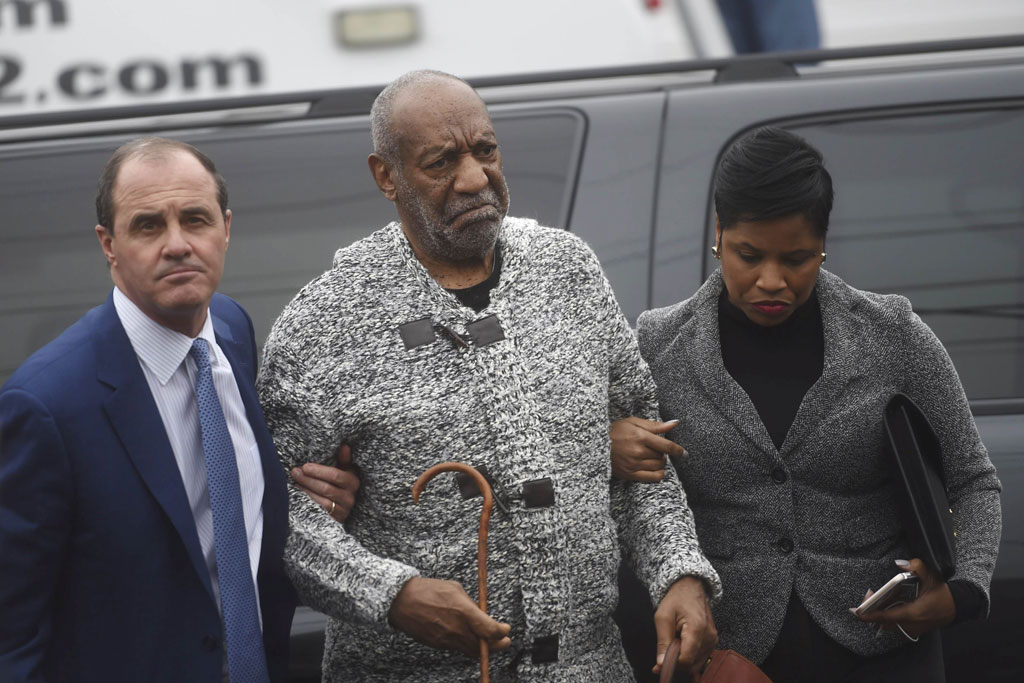 NORRISTOWN - Bill Cosby goes on trial Monday, accused of drugging and sexually assaulting a woman at his Philadelphia mansion 13 years ago, with the megastar turned pariah facing prison if convicted.

For decades, he was "America's Dad," loved by millions for his role as an affable obstetrician and benevolent father on "The Cosby Show," one of the most popular series in the history of US television.

On Monday, the disgraced 79-year-old will walk into Montgomery County Courthouse to face three counts of aggravated indecent assault, which each carry a maximum sentence of 10 years in jail and a $25,000 fine.

Around 60 women have publicly accused the pioneering black comedian of being a serial sexual predator for decades, shredding his reputation, ending his career and leaving him isolated by friends and celebrities.

But the trial concerns the allegations of just one woman, a former Temple University employee. It is the only criminal case as the vast majority of alleged abuse happened too long ago to prosecute.

In the imposing court in Norristown, just outside Philadelphia, a 12-person jury, two of whom are African Americans, will determine Cosby's guilt or innocence in a trial expected to last two weeks.

It will be one of America's biggest celebrity trials in years.

Several of Cosby's co-stars from 1984-1992 sitcom "The Cosby Show" are reported to attend. More than 100 journalists are expected to attend the trial, with dozens of broadcasters and photographers expected to camp outside.

If convicted, he risks spending the rest of his days behind bars. If acquitted, and claiming to be legally blind as a result of glaucoma, Cosby's career is unlikely to recover.

- Her word against his -

His accuser is Andrea Constand, 44, who at the time was director of basketball operations at Temple University, where Cosby served on the Board of Trustees until his resignation in a blaze of scandal in 2014.

Constand says Cosby, whom she considered a mentor, plied her with pills and wine, before sexually assaulting her on his couch in 2004 after seeking his advice on moving to Canada and switching careers.

Cosby says he gave her Benadryl to relieve stress, insists their sexual relations were consensual and accuses her of lying.

Constand, who is gay and lives in Canada, waited a year to report the incident and initially settled the case with a civil suit in 2006.

The case was re-opened in 2015 by Montgomery County prosecutor Kevin Steele, who claimed new evidence had come to light. The actor was arraigned in December 2015 and released on a $1 million bail.

But securing a conviction or an acquittal will be fraught with difficulties -- and ultimately comes down to her word against his.

The prosecution asked for 13 other Cosby accusers to testify, but Judge Steven O'Neill has permitted only one in addition to Constand.

They will likely introduce a 2005 court deposition, in which Cosby admitted obtaining sedatives with a view to having sex.

The defense will seek to undermine Constand's credibility by highlighting her delay in coming forward and apparent willingness to continue to meet Cosby after the incident.

The jury was selected in Pittsburgh because the defense argued it would have been impossible to get a fair panel locally because of the publicity. They will be sequestered for the trial.

While Cosby has said he does not expect to testify, his lawyers have not ruled out the possibility entirely.

In her original deposition in January 2005, Constand said the actor handed her three pills and urged her to sip wine. Within minutes, she claimed to have "blurred vision" and no strength in her legs.

Cosby then laid her down on a couch and allegedly fondled her breasts, put his fingers in her vagina and put her hand on his erect penis.

The comedian, actor, author and philanthropist attained his greatest fame for his role as Cliff Huxtable on "The Cosby Show," jettisoning a man raised by a maid and a US Navy cook into a life of fame and wealth.

His wife of 53 years, Camille, has stood by his side, but it remains unclear if she will attend the trial in person.